I recently shared an article about Gamification techniques, and one of those techniques is to use an avatar or character that follows you through an entire e-learning course. Why do this? Though it’s a good idea to choose characters that are relevant and that people “connect” with, it’s also about control: learners like to have control!

In this example, notice how you get to choose either your female or male character at the start of the scenario, and the character you choose is then used throughout the scenario. 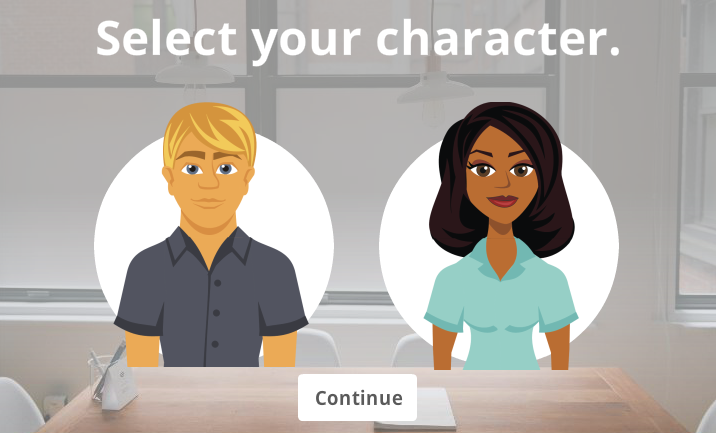 A community member asked: How can this be achieved using Articulate Storyline? As usual, there’s more than one way to do something in Storyline. My example will show you how to use a single variable, along with the appropriate triggers and states, to achieve the personalized avatar.

The first step is to build out the slide where the learner chooses a character. So go ahead and pop a few illustrated characters onto your first slide, as well as a Select button.

Now, because you’ll want the character you selected to show up later in the course, copy one of the characters you just inserted onto a few of your content slides. Now create a new state for that character to display the male avatar. The idea is to toggle between the male or female states depending on which avatar the learner selects on the first slide.

Back on the slide where learners select their character, select both of your characters to create a button set. Putting items in a button set means only one of them can be selected at any given time.

Now you need to create the variable that controls which avatar is visible throughout the course. To do that, create a new number variable with a default value of 0.

The next step is to add triggers to the Select button. The first trigger adjusts the number variable and makes it equal to 1 if the female avatar is selected when the Select button is clicked.

To save yourself time, copy and paste the first trigger. Then you can simply update the value to 2 and the selected character to be the male avatar so that when the Select button is clicked, the variable will adjust to 1 or 2, depending on which avatar is selected.

Need a closer look? Watch this video tutorial that will guide you through the process, step by step.

And there you have it—a quick and easy way to easily use a single variable, states, and triggers to control a learner’s avatar in a Storyline course.

Choose an Avatar with a Slider using Storyline 2

4 Steps to Create a Toggle Trigger to Pause and Play Multimedia in Storyline (With Download!)

Dear Nicole, Is it possible change the variable with time? Such as add 1 for every second, so the variable changes the status by triggers. I tried to make the character looks like talking, without add a lot of shape. Any suggestion?

Hi Wally - You could definitely do that - use a change state when timeline reaches trigger. As to whether you should do that... well, it'd be incredibly time consuming. There are any number of animation programs (GoAnimate, Codebaby) that can create a workable avatar that looks like they're talking. You could invest dozens of hours doing it through triggers, and I'm not sure if it would start to break down after a while. Test it out on a 15 second clip just to see how much work it would be.

Thanks!! Using animation programs is a good solution!!

Well if we're talking unlimited time and budget, just have ILM do it with the same tech they used to bring Peter Cushing back for Rogue One. =) But here in the real world there are other options - if you don't like GoAnimate or CodeBaby (or others) that's cool, but dismissing them out of hand as amateur does a disservice to those products and worse, to anyone who might read your advice and not look into the alternatives themselves. I've had multiple clients use both - and not just small clients either.

Well you probably are if you use those tools for animation. If you are animating and you aren't using arcs, anticipation, slow in and outs, follow through, then you are using the wrong tools. In lip Sync you have to be able to animate the face, the eyes as well as the mouth. The neck and head can also move. The right pose can also show the right mood he or she is in. Having a flapping mouth with no character is completely distracting and poor for the learner. If you don't have an animation background the best bet is to fade photos in and out in storyline.

Hi. Yes i'm trying to do something similar and looked at this example above. When i try it i can see a slight flash from the first question to the second. In my file i had about 6 states for an avatar but the second you move onto another slide theres a 'slight' flash as it defaults to the 'normal' state. I then hid the normal state and had all the triggers saying 'if avatar=2 then change state to 2' etc but there was still the flash. I dont get why the first avatar (normal state) would flash briefly before it shows avatar 2 as the initial state is 'hidden'. Has anyone got the file above working properly ?

Hi, thanks for the reply. Yes i tested that and it still happens in the published version. In the example above they did have a fade on the avatar (perhaps to stop this issue) but it looks strange fading on every slide. So i took off the fade but see that slight 'flash'. The crazy thing is i've set it to initial state: hidden but even then i see the guy first for a split second and then the lady which doesnt make sense. (As its hidden and the code then has 'if avatar=1 then change state to man', 'if avatar=2 then change state to woman' but i still see a flicker of the man first before the woman picture. Arrrghhh ;) Thought it would be easy doing the avatar ! Even when i put the code in a master slide i still have the same issues

Sorry Paul I don't think that I can help you further. I've just checked the project file and I'm doing the same as you - set image to hidden, change to normal (Jaz) or Tom or Sara (I'm using 3 avatars) depending on the variable. It does flicker if I test within storyline but our html5 version currently on the web doesn't seem to have the flicker https://www.keele.ac.uk/hltutorials/informationskills/checkyourskills/story_html5.html Just checked the flash version and that does flicker!!! Can anyone else help?

Hi Paul, Something you might consider doing to remove the flash is to remove the character altogether from the "Normal" state (so that it's completely blank and empty, the normal state) and simply add a new custom state for each of the characters. If the Normal state has nothing on it, the flicker should stop happening. The reason the flicker happens is because it takes a second for Storyline to "read" the trigger and, for example, set the character to the Hidden state.

Thanks Nicole, great suggestion. I did have it showing 'hidden' at first before it shows man or woman and it still flashed. But like you say Storyline must first of all show the normal state for a split millisecond before it runs the triggers so i'll try that instead. Sounds like that should be better. Thanks

You're welcome - it's a problem I've also run into and thats the solution that worked out for me! :)

Hey I haven't tried to see if I can follow this video yet but, if it is meant to show those who can't already do it, perhaps you could consider slowing down just a little - particularly when showing how to DO what the voiceover is INSTRUCTING. Just a thought.

Had a go and created slider and states and it works very well. Shame we can do it a slider for each area. Such as slider for hair style, Slider for outfit etc.