As we noted earlier, after recording a video screencast you have the option of inserting the video as a screencast tutorial which will play on a single slide. Or you can insert the video as a series of interactive slides that simulate the software.

In this tutorial, we'll explore how to insert interactive simulations.

Once you have a recorded video you can reinsert it as a simulation. So we’ll just reinsert the PowerPoint video we recorded earlier. But instead of adding it as a video, we’ll add it as an interactive simulation. 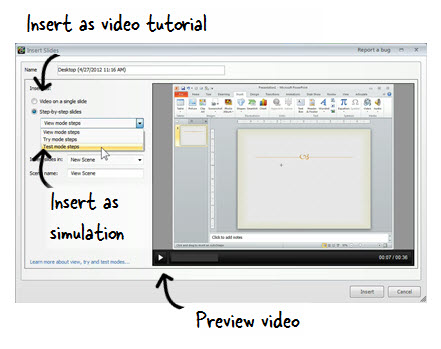 Once the content is on the slide you can edit it like any other slide—add characters, shapes, text, interactive buttons, etc.

That’s basically it. Record your computer screen and then make the choice of either inserting a video clip of the entire screencast or a series of interactive screens to simulate the software. In the next tutorial, we’ll look at how to edit the interactive simulations.