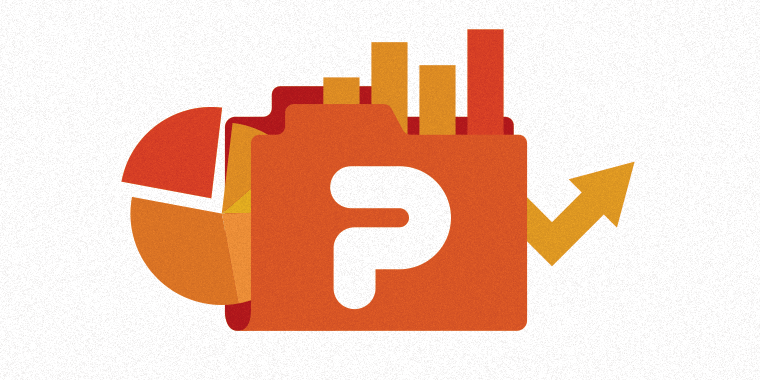 If you think infographics are only for marketing and data visualization, think again. They’re actually really helpful for anyone building online training because they use a lot of the same elements that course designers use to design e-learning.

In this tutorial series, we’ll look at using PowerPoint to create simple infographic elements. PowerPoint is ideal because it’s not only a capable graphics program—it’s also a nearly universal tool, and the editable graphics you create can be used in Articulate Storyline. 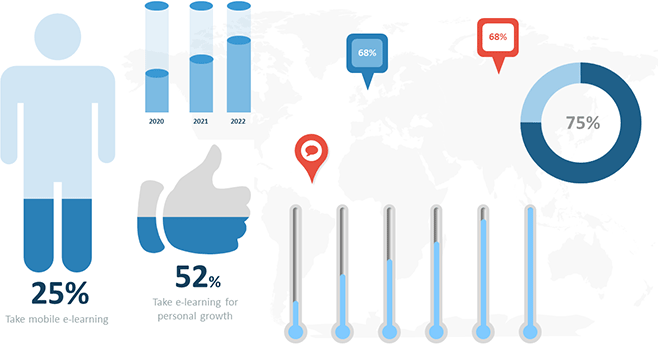 We’ve written a few articles on creating custom pictograph characters for e-learning. The first shows Simple Ways to Create Awesome Custom E-Learning Graphics and the second was a weekly challenge on Creating Your Own E-Learning Characters with Pictograms. 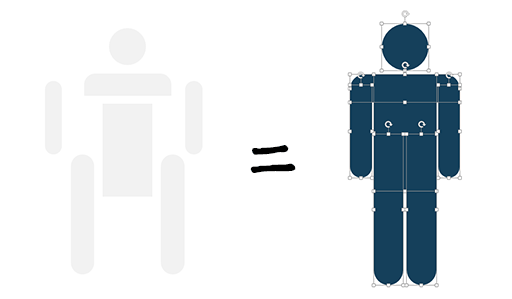 In this article, I want to share a neat trick for setting up your graphics so they’re easily shaded to show percentages. The best part is you won’t need to create separate graphics for each percentage change.

The secret to creating your own graphics is in seeing the basic shapes that make up the final graphics. Check out the following video to learn how to combine basic shapes to create people:

Step 2: Creating the Masking Effect for Your Graphics

Now that you have your collection of editable vector shapes, it’s time to combine those images into one graphic to create the masking or stencil effect. To combine the shapes, you’ll work with the Merge (Combine) Shapes tool introduced in PowerPoint 2010. You can learn more about Combine Shapes in this article.

NOTE: Before you begin, remember to duplicate your people graphic so you don’t lose the work you created in the previous step. I mention this in the video but it’s worth repeating.

Now that your graphics and masking effect are in place, the final step is to create some guides to help you adjust the emphasis for each percentage.

In this example, we’re using the guides as temporary rulers but there’s nothing wrong with using the technique to create permanent guides for your own purposes.

With that basic technique, you can apply this technique to just about any vector graphic you create in PowerPoint. Just remember, to always save your source graphic shapes so you can use or edit them later. Once you combine the shapes, they’re lost.

Show Me Your Examples

If you try this effect, please include a link to your examples in the comments below. You know how much we love examples and I’ll find a way to curate what you folks share into another post to showcase your work.

In the next article, we’ll look at creating simple pie charts using PowerPoint’s built-in tools. That’s right, we’re not using the data and chart tools because we want the graphics to be editable in Articulate Studio and Articulate Storyline.

Video Workshop: How to Build a Video Gallery in PowerPoint & Studio '13

How to Design Visual Feedback Meters in Articulate Storyline

Question--You mention a link to how to get the Merge Shapes Tool in PowerPoint 2010 in Part 2. Could you provide that link? Thanks!

Hi Elaine! Sorry about that. I meant to include it in Step 2. Here's the link: http://blogs.articulate.com/rapid-elearning/how-to-create-a-rapid-e-learning-tab-in-powerpoint/ I'll udpate the post to include the tutorial. If you have any questions about setting up your shapes, let me know and I'll give you a hand.

Thanks, David. BTW, found the article very helpful as I am currently doing a lot of diagrams in various training presentations and this is much clearner than some of the things I was doing.

I'm glad to hear that, Elaine! I'd forgotten that PowerPoint 2010 calls the tools Combine Shapes and not Merge Shapes. Sorry about the hassle. Are you all set now?

Yes, I am. And it wasn't that much hassle at all. Thanks!

Thanks, Allison! I really appreciate your comments.

This is great! I think it would be awesome to use in an e-learning course and animate the emphasis color to show the percentages growing synced with audio or something. Getting soo many ideas from this! Thanks!!!

That's right, Felecia! I planned on including a post on importing the PowerPoint infographics into Storyline for interactivity. But, if someone (hint) were to beat me to the post and show an example, I'd feel compelled to include her (hint) examples in my tutorial post. Just saying:-)

David, I can't thank you enough for this. I am a PowerPoint maniac and didn't ever heard about the masking effect. This post is gonna cost me hours of digging into this feature and I m so loving it...Just customized my ribbon also...Thank you so much again :D

Isn't it cool when you learn a new way to use the tools you already have? I feel like I'm always learning something new with PowerPoint:-)

Crazy good tutorials, David! Like Ashi, I love the masking effect and had never seen it done before. Thanks for sharing these!

Ahh thanks, Jackie! It's not every day that I get to show the elearning cool kids a new trick:-)

This is very interesting and just when we are starting to get into infographic than just the usual "text-based" statistic reporting. Thanks, David!

Right on! Glad to hear this was helpful Pauline! Thanks for your feedback.

Just love the masking technique ;) Thanks for sharing David!

Hey thanks, Vico! PowerPoint continues to surprise me:-)

Thanks a lot, Sandi! I'm so glad you liked it!

Great tutorial! Thanks a lot!

I really appreciate that, Paula! Thank you:-)

Thank you for sharing David. This is great information! I haven't done much with infographics but with your tips this is definitley something I think I could do!

Okay that's a really great point, Devin! I didn't mention that technique only because I wanted to make it easy to update as custom states in Storyline. I felt it would be easier to adjust the fill by dragging fill shape up and down rather than using gradient stops. But your method totally works and it's probably worth adding as a note in the tutorial.

Thanks for this. I appreciate the mix of images, text instruction, links and videos that you've used - all makes for a very well presented article.

This is so useful to know. Many thanks

What a great tutorial! I learned so many new tricks. I really appreciate your posting this.

Thanks, David. I am new to e-Learning design and this is a simple way to make these infographics! I also taught myself how to add tools to new tabs in Powerpoint 2010 before you posted your link, so, bonus skill acheived!

Thank you for this informative overview. I'm using what you taught in a presentation in Poland in the next couple weeks so thanks! It took a bit of exploring but here are the combine functions if you're using a mac. Combine Shapes are new for PowerPoint 2011 and are a set of four tools that let you combine, unite, intersect, or subtract selected shapes in various ways, depending upon which shape overlaps the other. Unfortunately they are so well hidden that you may not even be aware that they exist! You won't find these commands in any of the Ribbon tabs -- nor will you be able to customize your toolbars to get these options. To view the Combine commands, you need to select two or more shapes. Then right-click (or Ctrl-click) the selection. In the resultant contextual menu, select the Gr... Expand

Thank you for this informative overview. I'm using what you taught in a presentation in Poland in the next couple weeks so thanks! It took a bit of exploring but here are the combine functions if you're using a mac. Combine Shapes are new for PowerPoint 2011 and are a set of four tools that let you combine, unite, intersect, or subtract selected shapes in various ways, depending upon which shape overlaps the other. Unfortunately they are so well hidden that you may not even be aware that they exist! You won't find these commands in any of the Ribbon tabs -- nor will you be able to customize your toolbars to get these options. To view the Combine commands, you need to select two or more shapes. Then right-click (or Ctrl-click) the selection. In the resultant contextual menu, select the Grouping option to summon the sub-menu -- you will find the four Combine Shapes commands here! - See more at: http://blog.indezine.com/2011/12/learn-powerpoint-2011-for-mac-combine.html#sthash.MCbxl6Ry.dpuf

I love this! Thank you so much for the steps on creating the people icon. I see the "thumbs up" shape and would love to make that. I have tried but I don't come up with anything close to what is pictured in examples section of this article. It looks like a mess. Anyone have any tips on creating this?

Very easy to do tut. Thanks! I was hoping to see how to create the circle %s. It would be awesome if you and one of those Anderson :)

This is a great tutorial. Can this be done on PowerPoint '09? This is the version I use at work right now.

Thans David! I always love your tips and tuts - useful and not so complicated! I tried to make an infographic a few times and they were soso. But now I think I can make a more visual attractive one. Thanks!!

I was really excited about this until I realized my employer is still on PowerPoint 2007 and merging shapes and masking are not available. However, you can create a similar effect by using a rectangle that matches the slide background and setting it to be semi-transparent, then overlaying it over your custom graphic. Thought I'd mention this for others in the same situation.

P.S. Can someone point me to the article about creating pie charts with PowerPoint's built-in tools that is referenced in this article? I tried searching and I'm not finding it.

This was nice, but when i merged my graphic in PPT it squared out the corners. Did anyone else have this problem?