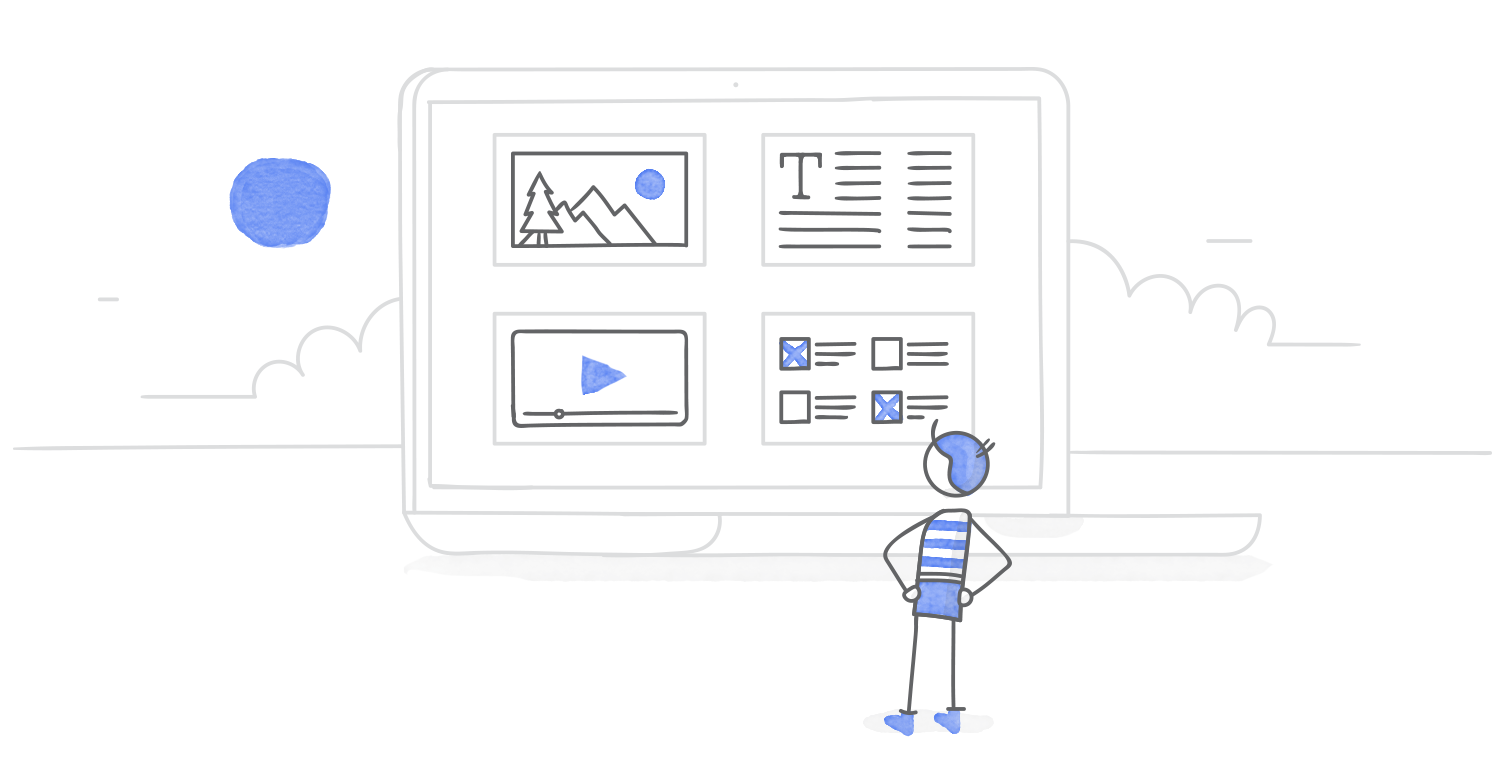 If you’ve ever created e-learning projects in slide-based apps like Storyline 360, you know storyboarding is a critical up-front part of the e-learning design process. It’s when you draft and organize the text and multimedia content for your course into a document, creating the blueprint for the course itself. Once the storyboard is ready, you send it to stakeholders for approval before moving on to the next phase of course creation.

If you’re like most designers, you probably use tools like Word or PowerPoint for your storyboards. But have you ever tried storyboarding directly in Storyline 360? In this article, we’ll walk you through why and how to do just that. Here we go!

Why Storyboard Directly in Storyline 360?

When you storyboard directly in Storyline 360, you create something stakeholders can click through and experience—called a prototype. This has a number of benefits, including:

With these benefits in mind, let’s take a look at what the storyboard process looks like in Storyline 360.

When you storyboard in Storyline 360, simply build out your slides as you normally would—without worrying about the design aspects. That means adding any on-screen text to the slide and the script for the voiceover narration (if applicable) to the notes panel. If you’d like, you could take it a step further and include text-to-speech audio to help your stakeholders get a feel for what that experience will be like. Often people react differently to written text than they do to spoken word, so doing this could help you avoid having to re-record audio later on.

If you’re going to pass the storyboard off to a developer, include notes about any animations or interactions you’d like them to add during the development phase.

Take a peek at this Storyline 360 storyboard example: 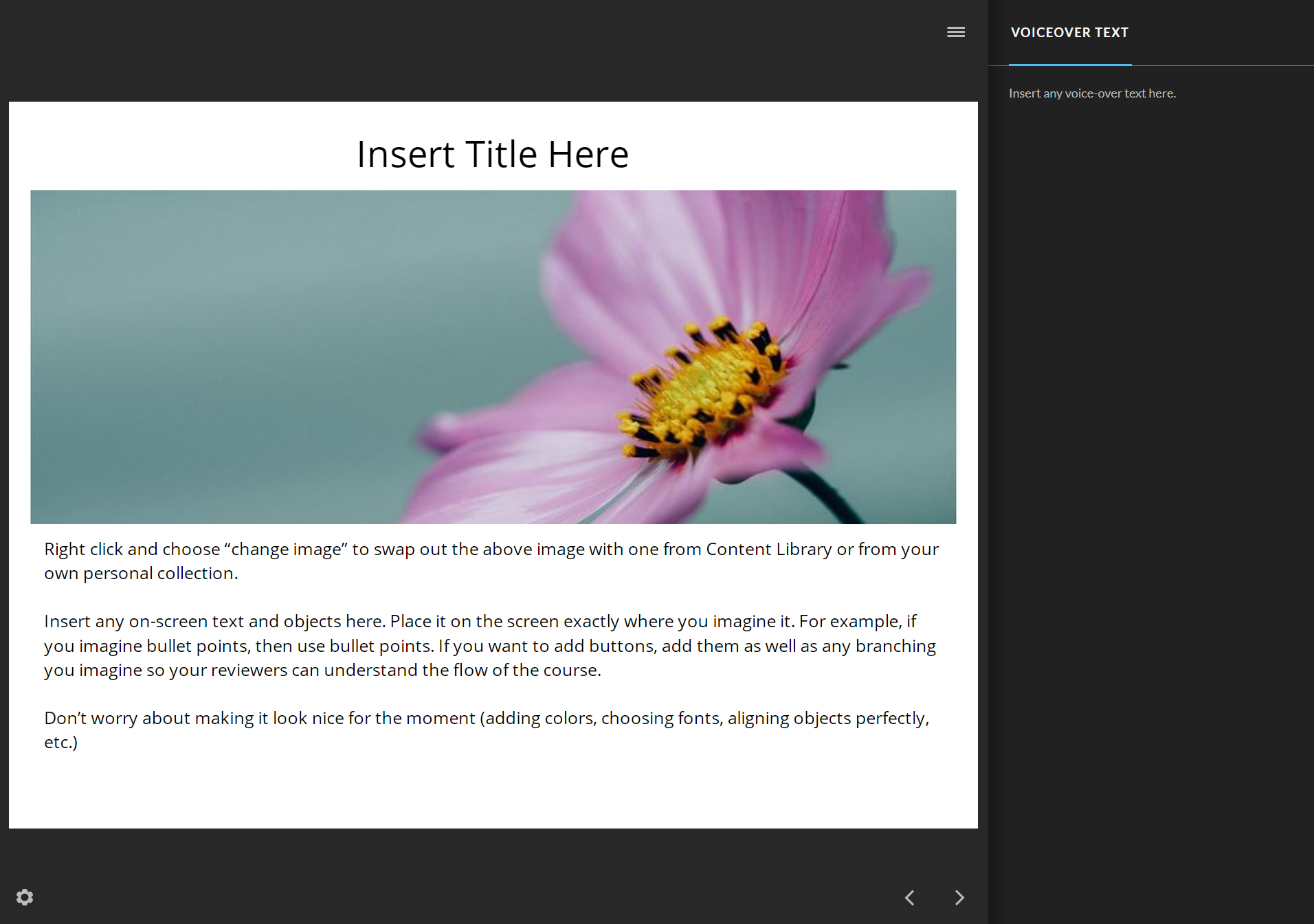 You’ll notice that while the storyboard is fully functional, the slide layouts are extremely basic and there’s no graphic design to speak of yet. These are things that’ll be added during the development phase.

Keeping this first version of the storyboard basic allows stakeholders to focus on what really matters—the content.

Once the storyboard is ready for feedback, go ahead and publish it to Review 360. From there, you can grab the share link and send it to your stakeholders, along with instructions to guide them through the review process. You might want to include things like:

Depending on the project, you’ll have more or fewer review cycles. When you need to make edits, simply open Review 360 on one side of your screen and Storyline 360 on the other side (or on a second monitor). Then you can read through the comments and resolve them as you make edits. Once that’s done, republish your course to the same Review 360 link and let your stakeholders know a new version is available so they can confirm the edits have been applied. Once everything is approved, you can move onto the development phase.

Whether you’re developing it yourself or sending it to a developer, putting the finishing touches on your e-learning is much quicker when you build your storyboard directly in Storyline 360. That’s because all that’s left to do is finalize the graphic design and insert the images, audio, and other multimedia. Once that’s done, you can simply republish to Review 360 and let your stakeholders know a new version is available via the same link.

And because Review 360 stores all versions of your course, stakeholders can go back and compare the storyboard version to the finalized version to see how it’s evolved—making the whole process even easier.

As you can see, storyboarding directly in Storyline 360 and using Review 360 for the approval process will save you and your stakeholders time and help you get your courses to your learners faster.

What storyboarding techniques do you use for your Storyline 360 courses? Let us know in the comments below!

Want to try storyboarding directly in Storyline 360, but don’t have Articulate 360? Start a free 30-day trial, and come back to E-Learning Heroes regularly for more helpful advice on everything related to e-learning. If you have any questions, please share them in the comments.

What to Include in an E-Learning Storyboard

Save Development Time and Storyboard Directly in Storyline 2

Seems to be more a mock up than a storyboard...

This is a very helpful article! Thank you so much!!!

We have been using this method and placing and questions we have for our SMEs into Review 360. It has cut our development time in half. You can also set up an "automated" notification/workforce by mentioning a shared developer in the comments to let them know its ready!
Sign In to Comment