I am looking to build the course objectives slide using an engage interaction, wanted to check if anyone of you has previously used Engage for creating Objectives or Summary slides.

I usually keep the course objectives slide very short and present as a simple bullet list in a PowerPoint slide.

A FAQ engage could be used to list objectives and then expand to show more information.

What did you have in mind?

Sorry Greg looks like we posted at the same time

If you can find or create a relevant image that ties closely to the course content, an Engage Labeled Graphic can be a refreshing and compelling way to express objectives. Below is an example (click here to see a published mock-up) and the source file's attached, in case that helps. 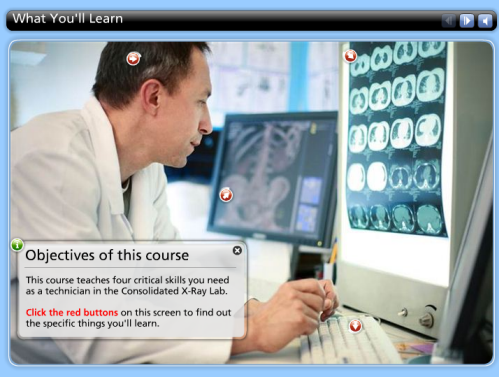 Love Jeanette's idea.  That's a great way to add more interest to the objectives compared to a dry list of objectives.  It might also be a good way to segue into some kind of storyline or simulation covering the content.

.  Hadn't thought of that but it's REALLY an excellent approach.

Udit, what did you end up doing?

I ended up using Jeanette's idea, that worked good

Does anyone have experience snazzing up objectives that aren't tangiable?  I.E. when they start with words like "diagnose," "distinguish," and "recognize."

The FAQ engage idea wouldn't really work because my courses are about 20 minutes long, so there is really no need to further build out the objectives.

I am struggling with the same issue which is how I found this thread.   I was thinking of adding characters, having them asking each other questions that nobody can answer, reach a point of confusion, call the 'expert' for help, then have the narrator act as professor and write the objectives on a white board and begin the course.  These same characters ask questions to change topics to cover each of the objectives.

Lori, I love that idea!

Thanks.  I'm wondering how to execute it without the silliness factor though.

Intangable objectives made me think of lectures.

I remember struggling because I had no idea how what the lecturer was waffling on about applies to me, or which parts I should pay attention to.

While I understand the objectives are less measurable, is your content focused on something that can be measured?

Is there an emotional reason you can target for why the content is important?

Here's an example of a simple image that, combined with the right words, can be a powerful course opening. In this case, it would be used for insurance agents learning about their supplemental insurance offerings and why families should consider purchasing additional coverage. 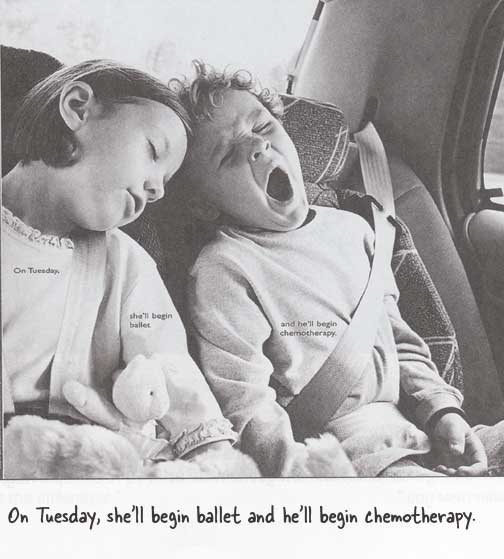 One thing I've done in the past when faced with "squishy" objectives, is to start straight away with a pre-test.

I make it challenging enough that it's unlikely anyone will pass without learning the specifics contained in your course. It serves as a wake-up call for what they don't know and why they neeed to focus.

My objectives are "recognize", "describe", etc.  They are only measurable by the assessment at the end of the course.  There is nothing the attendes should do after taking the course, it's only to raise awareness.

There are no such emotional consequences for this, however, there are implications of not doing your job very well, and wasting other people's time along with your own, and wasting the company's money if you don't pay attention, which I have received from the SME.

This course is an overview for many different disciplines/departments, which will be given instructor led training according to their job description later.  That's where they will focus the 'how to' objectives since they will be different for the different departments and positions.  The take away for the engineer will be different than it will be for the project manager, purchasing agent, etc.

I want to weave in the different postitions and how they will eventually use this information throughout the course, using each to ask questions pertaining to what they need to know in order to do their partiular job, so in this way the objectives are covered and the flow of the narrator rattling on gets broken long enough to acknowledge learner.    I was thinking of perhaps a carousel engage interaction, introducing the different positions and how they likely will use this information after receiving the ILT portion.  The SME has written this part for two of the three lessons, and I think it helps for people to know where to focus.  I don't have enough information for learners to pick a character, make decisions, see the consequences, and eventually lead to the lessons that everyone can take.  Again, that would be better with 'do' objectives instead of 'know' objectives.

Right now  have some of the characters introduced in the beginning carousel interaction asking questions throughout the course, and the senior engineer telling them what they need to know and where to find it.  Alternately, it could start with one charcter calling the next, they don't know the answer but have realized they have a situation where they need to know as well, and eventually they walk over to the senior engineer's office and request a huddle or meeting.   Having narration and linear navigation are two of the requirements (or at least taking the lessons in order), so I was trying to make dry content interesting.  The narrator/senior engineer sort of takes them into his office and gives them an overview, and writes the objectives on the white board first.

I am just using photos.  I'm trying to work out how to weave this into a story and not have it seem...well...silly.  (Well, silly would be good if I could really cheese it up and make it funny, but I don't think that will fly except between me and the SME).

Sorry this is so long!  I meant to offer it as an idea, and am curious as to how others have done something like this in technical training with 'soft' objectives, and made it look good and work well.

That was our first idea.  We wanted them to be able to test out as well.

The training manager said no....

So the pre-test is now knowledge checks at the end of each lesson and the assessment is at the end.

You might consider reframing the objectives as questions. When I'm dealing with foundation level concepts and information this helps to prime the experience. The formula used to construct the questions will vary by the audience and sometimes I won't go directly for the objective question. Setting the lead-in as more of a conversation can be a really natural way to pull folks in and make loose connections with prior experiences.

For example, if I knew this might play well with my audience I might lead off with:

These transitional queries can progress into a listing of questions that the learner will be able to answer (to some standard) when they've finished the experience:

This way you're at least trying to start a conversation between the learner and the experience. This type of setup doesn't always work, but I find it often provides a better framing for objectives than a three part instructional artifact.

Here's a great example of this type of conversation in action. This type of interaction chaining is quite a bit of work, but in some situations I think it's a dynamite way to engage the learner.

If you wanted to personify these cues and were worried that it would appear cheesy, sometimes that can work to your advantage if you can make it obvious that you are trying to be cheesy

Just to be clear... I'm not suggesting a test-out option.

I'm suggesting using a quite challenging pre-test to set the bar for them and establish what they will learn in the course.

When done correctly (ie harder than the actual post-test), it's rare that someone can pass the pre-test anyways. And if they do, they still must take the couse. In that case we just give a nod to them already having a headstart on what they are about to learn.

I understand and agree.  We do that with instructor led training.  It isn't allowed for elearning at this time.

This is exactly the sort of thing I'm trying to do.  In this course, we have about 10 different positions that will ultimately use different parts of the information provided in different ways, i.e. what's critical to one, the other doesn't even need, so I either want to show how they are all related by having them ask each other questions, or show how they all use these documents differently but need to understand what they are doing because it impacts everyone if they don't at least have a basic undestanding.

That's not really the objective of this course, but it's the real objective.

We have to have a slide that states the objectives, so I was hoping to use the conversations as a lead in, or the dilemmas the characters have on a engage interaction, and have the narrator state the objectives as he writes them on the white board of his office.

It would be so much nicer if the objectives slide wasn't a requirement, but it is.

Good point about the cheesy.  I think I'll have them pop up out of cubicles. I love that one!

I found a great example of spicing up objectives when I was looking for something else.

HI Jeanette! Thanks for this amaing share. Could you please share the raw file for one more time. The attached one isnt working for me.

I've attached just the source file from Jeanette's example below. Let me know if you have any trouble with this one!