So remember when you'd be in your PPT, and launch Engage from it, and do a Guided Image .intr, and publish the whole thing out and get : 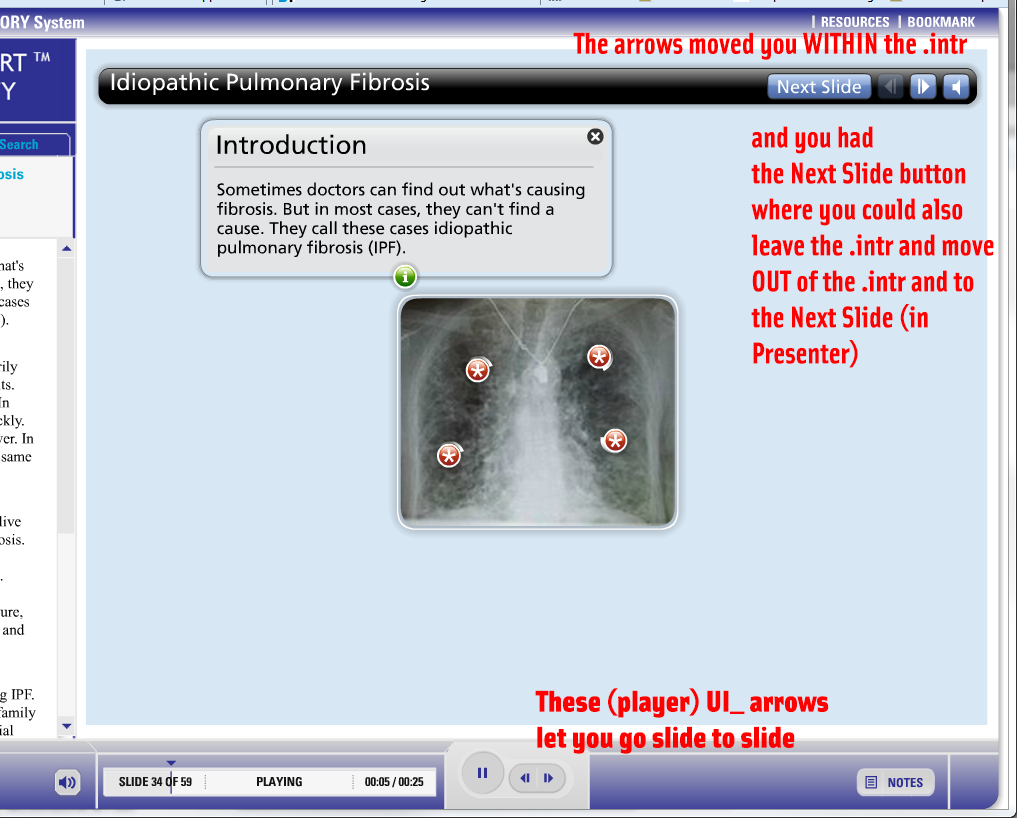 Except that the *sarcastic fingerquotes*  "SREAMLINED UI" takes away pretty much ALL of that.... And what you are left with, is now, when you do the above in '13, you get an .intr in a player , where the "CONTROLS" ... [PREV] & [NEXT]  are set to "Auto" when in the Presenter's Slide Properties (and on the .intr's slide), because the [PREV] [NEXT] buttons are now being (optionally) used for the .intr . (see image below) 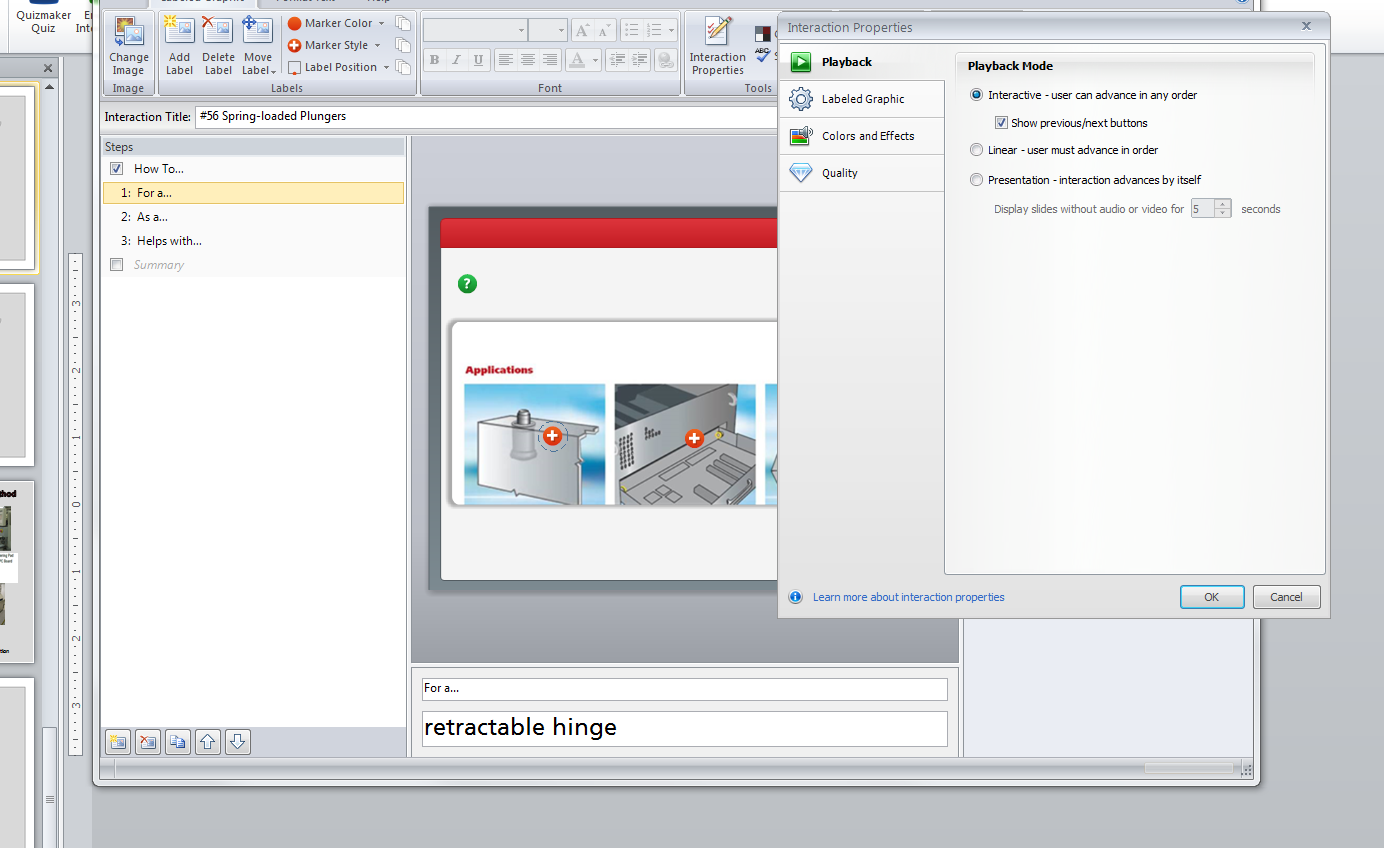 HOWEVER... these [PREV] [NEXT] buttons are ONLY for moving back/forth within the .intr... but NOTHING happens to them visually to distinguish this new/different functionality.

AND... even though the "edit properties" of the .INTR slide allow you to "let the user leave the interaction: AT ANYTIME".. .. all of the sudden, the ONLY way that is possible now, is IF the user knows that they now have to use the MENU to get out of the .intr (so you BETTER have a MENU now).

Sooo... was wondering if anyone had figured out ANY kind of pseudo-workaround to this?... So that you aren't forcing this (questionable?) new UI / UX upon the user?

And then 2ndary, is EVERY engage .intr have STEPS now??  --- even if your say, Guided Image .intr is meant to NOT be Linear..., and you want your user to be able to click on whatever Markers they want, in whatever ORDER they want (and maybe if, god forbid, let the user LEAVE the .intr) .. Because, the exception to the rule of the [PREV] / [NEXT] button, is that you move back/forth in the .intr , UNTIL the user has clicked-on or PREV/NEXT 'd their way through ALL the .intr's pieces,  AND (only) THEN, clicking the [NEXT] button will take you to do the next SLIDE (and move out of the interaction).

Anyone? Anything? OR... are we just now having to force our users into this UI/UX box?

O  Interactive - user can advance in any order

[ ] Show previous and Next Buttons

I hated the different controls that were forced on the user through Studio 09, I think Articulate have done a great job unifying the controls so it feels like one course in stead of separate components

I much prefer this way of doing things

Yes. you can. (and just in case you are reading this and DON'T know how, one way is via Presenter, on the .intr's slide, you can either click the line that tells you the status of this, OR you can click on the button with the silver cog on the left, followed by "Edit Properties..)

Phil Mayor said: I hated the different controls that were forced on the user through Studio 09,..

Hmmm... okay. But, using your word, ... Although the different controls could be considered to have been "forced" upon them, they were NOT "forced" to USE them. They had the choice of how they wanted to get around the course.Use the .intr's buttons, or DON'T.

Here though, we now have a UI that not only FORCES the user over to the side menu, should they want to navigate away from the interaction, you ALSO have the articulate developer being FORCED in some instances to have a MENU somewhere within their Player now, if only to allow the user to continue the course.

Admittedly, I may have to (out of necessity) , change my Design and UI and UX thoughts to the new reality that (it seems) now ALL interactions have "STEPS" (even if it's an image with markers on them, and it doesn't matter what order they open the markers in) . Which is fine, just an odd to think that a product called "Engage" is now a little LESS engaging (w/ less CHOICE and more LINEARITY).

Thanks for taking the time tho!

A couple of years ago I built some courses for NCIN, I think in total it was 120 odd Presenter courses, we did a lot of usability testing before releasing them and I was surprised how many people never saw the engage and quizmaker controls and continued pressing next on the player, and missed a lot of the content and interaction.  The courses are still available here http://www.mylearningspace.me.uk/moodle/ but you need to enrol, near the end of my time in that project we designed later courses in Storyline and had less usability issues.

The result was that I built a custom skin and we added instructions that appeared for engage and quizmaker interactions.

the unified player keeps the controls in one place, they can still interact with the slides by clicking on each step, you can set it so the next buttons don't go through in a linear fashion.

Not it sure that you need a menu , as you can set it to leave at anytime.

my thoughts are that from a User experience and user interface, this is a much better solution, Studio 09 broke UI rules by having different navigation methods, this makes it much cleaner and easier for the user.

The  important thing here is that Studio 09, 13 etc are tools that we use, I see Studio as a PPT/Form based tool for producing engaging all be it linear courses. For greater interactivity and branching I would use another tool.

It looks like you and Phil are having quite the discussion here! It looks like Phil touched on all the points regarding the new player and navigation, and you're definitely in good hands with his advice and expertise.

Also, please know that we're always happy to hear your feedback and if there are particular features that you'd like to see as a part of Studio 13 don't hesitate to share them in the form of a feature request.

ahhh... so some NEW things about the new player that I didn't know! So then, if you have a chance could you clarify the HOW(s) of what you said.. (that is *IF* you were referring to things you can do in the new player, and not what you could do in YOUR custom skin).

(*BIG QUOTE* Phil Mayor said: the unified player keeps the controls in one place, they can still interact with the slides by clicking on each step,

And/But … how would you then address (with the new player)an interaction that does NOT have steps ?

(ie. A guided image of the back of a … oh, let’s go oldschool and say a VCR… where the user would be able to click a marker that’sover a specific part (ie. An input port) Because IF you don’t have a MENU toget out it, AND the [PREV] / [NEXT] buttons don’t leave the .intr (that is,until you click on everything… which will turn the [NEXT] button back into an “advanceto next SLIDE” button)...

(*BIG QUOTE*) Phil Mayor said: you can set it so the next buttons don't go through in a linear fashion

Oh? Cool! Ummm, how? …. And we are talking about just the[NEXT >] button, right?  And then, youare saying that you can set it so that it doesn’tgo through the interaction in a linear fashion?

(*BIG QUOTE*) Phil Mayor said:  Not it sure that you need a menu, as you can set it to leave atanytime

So right, this is true, if you mean that you can set the 1stof the 2 Engage interaction Properties, where the user can leave theinteraction “At Any Time”.    If yes, thenagain: “Oh? Cool!” and then again : “Umm how?” as in, HOW does one do it/set upa player sans menu, so that the user CAN leave the interaction? Are you thinking that you would then have to turn the [PREV]/[NEXT] buttons ON ?