PPT Hyperlinks Not Working When I Import Slides

I have a small PPT deck that is a mock interaction using hyperlink buttons that jump to different slides while I use Articulate Slide Properties to only show 1 slide in the menu, making the whole thing appear to the learner to be one slide with a lot of interactivity. Works great -- just like Tom said it would!

I want to create several of these so that one of our developers can grab from one a library, insert it into the PPT deck for his Articulate course, change text & images, and he is good to go with a canned interaction.

Here is the problem: When I insert the slides from the interaction deck (deck 1) into my class deck (deck 2), all the hyperlinks on the buttons go to relative slide locations. For example, if a button in deck 1 hyperlinks to slide 3, once I insert all the slides from deck 1 into deck 2 after slide 10, I want that button to hyperlink to deck 2's slide 13. However, it now hyperlinks to deck 2's slide 3. In Excel terminology, it is making an absolute reference and I want it to make a relative reference.

I have a workaround, but I don't like it. If I make a copy of deck 1, edit it, and insert some of the slides from deck 2 prior to the first slide in deck 1 and the rest of the slides from deck 2 after the last slide in deck 1, the hyperlinks work correctly -- relative references. I can even insert a new slide into the middle of the original slides for deck 1 and the hyperlinks still work. But I want my developers to be able to start with their own PPT decks and insert these other slides because it more closely models their process flow.

Anybody got a fix?

I havent tried this, but if you gave each slide a unique title, if you link to the slide title instead of the slide number it should work.

Phil/Beeker, are you talking about the title that PPT assigns from the default title box? Or the Navigation Title that you can create in Articulate Slide Properties to override the PPT titles? All slides in the deck 1 interaction have PPT titles and I even made sure they were all unique. All slides have Articulate Navigation Titles, as well. Those do not display for slides 3-5 in Slide Properties because they are maked "hidden" but the titles are there if I unhide the slide.

So all slides have titles, but this is still kicking me in the head. (I will tell Dr. Bunson Honeydew that you were a big help, though) 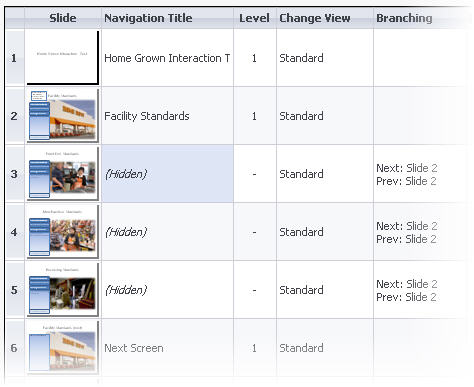 It is more the default slide title built into ppt, You would need a title textbox on each slide, but I always push these off the slide anyway.

I have just tested it, and it does not work.  I dont think there is a solution to this, hopefully someone better than me will step in and solve it for you

I will have a think, its late here so I might be missing something

Hello Chris, I have not had this problem, but I'm curious if you were to copy over one slide at a time what happens?

@David – I tried this with no success. To make sure I am following you:

No difference. My workaround (above) is looking better every day. Still hoping someone has an insight on this.

The Guru has spoken. Tom Kuhlman gave me this feedback on the question, so this settles it:

PPT creates a unique ID for each slide.  So when you bring a slide into a new presentation, the unique ID may change.  Thus the links won’t work.  Essentially you can build the structure, but you’ll have to go into the slides and reset the links.

So we are going to go ahead with the workaround I mentioned in the original post. Thanks to all for your input on this.