raw audio files recorded in Audition will not import in Articulate

We are using Audition C6 to record audio for Articulate ’09.   At times we would like to import the raw audio files recorded in Audition into Articulate.

The problem is that the files that are recorded will not import into Articulate.  I get this, “Invalid wav file: FMT header invalid” then this “"Unsupported audio file and or bitrate."

When I export out of Audition as a wav 16 bit, 44100Hz it can be imported into Articulate.

These two files, I believe, are identical in every way except the exported file is a bit larger.  I am guessing there is some sort of metadata that Articulate does not like in the original file.  Is there a way around this extra step of exporting and creating another file?

Below are the properties of the two files 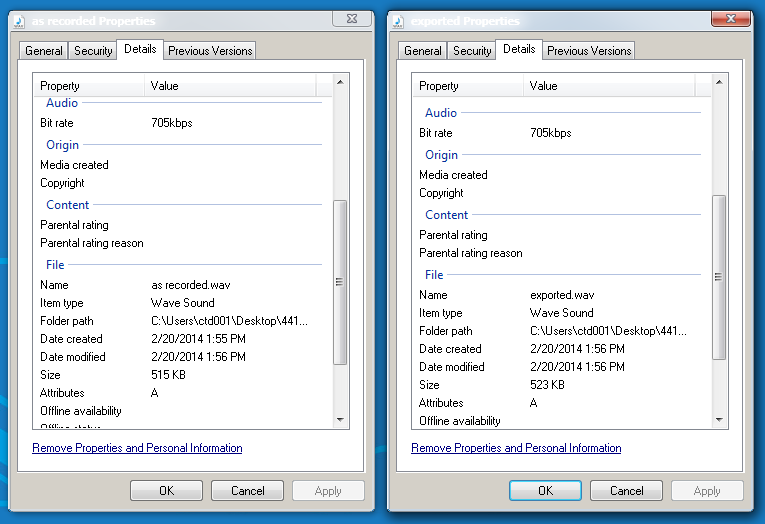 Hello! I realize this post is from a couple of years ago, and no doubt you have solved your issue by now. However, I experienced the same problem exporting from Adobe Audition CC to Storyline 2, and thought I would share how I fixed it in case anyone else encounters the same issue.

You are correct, the issue was metadata, so this post actually led me to the solution. When exporting, there's a setting to include markers and metadata; this needs to be unchecked. After that, it worked! 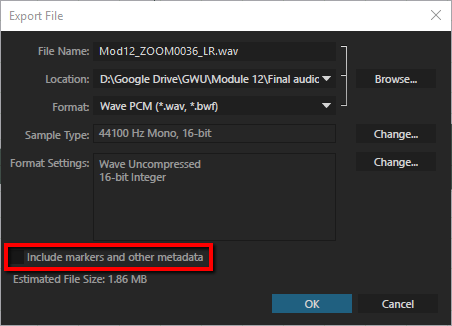 Even if your information cannot assist Shane, it could certainly assist someone in the future. I appreciate you sharing your findings and solution with the community.

Wanted to add to this: I've had trouble with .wav files and SL.  In the format box, choose "MP3" to export it as an .mp3 file. I've never ran into issues with .mp3

Hey Luke! New to the community and on a roll to assisting :) Thanks for chiming in to share your advice in this older thread. That could certainly assist someone in the future. Much appreciated!