I've also successfully translated all the Quiz elements EXCEPT for the name (title) of the Results Slide as it appears in the Notes tab. See the attachment for a screen shot.

Any thoughts on where the English text is coming from and how I can modify it?

Please see this tutorial on Changing the Player's Text Labels, specifically the section on Switching to a Different Language: 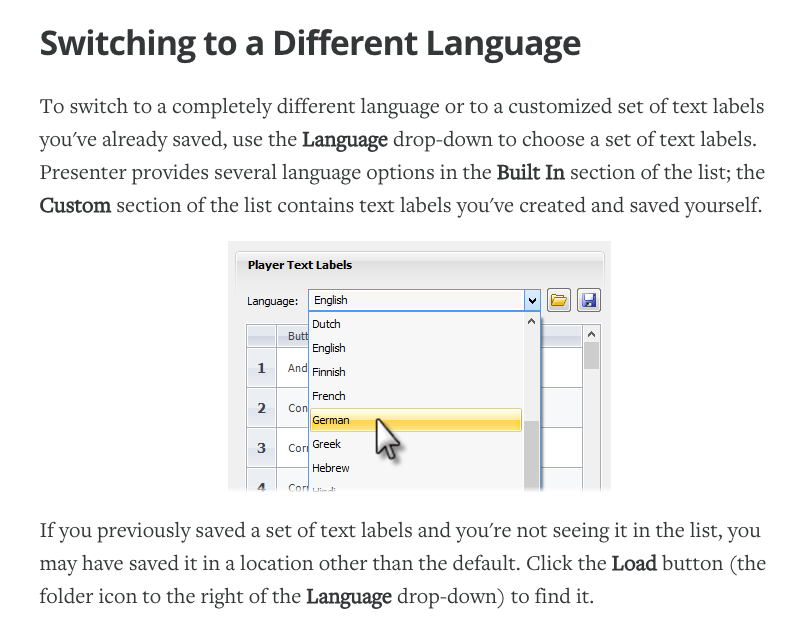 Thank you. I had previously done that, and unfortunately it had no affect because in the main Articulate Player text labels area there is no "Results Slide" value, so there's no way to change it. Same thing if you edit the Player in the Quiz itself.

However, this morning I tried using the Translate feature within the main Articulate interface (which I had not used at all for my translations, preferring instead to "manually" translate everything: going into the Players and updating the text there, as you indicated; changing the text in the Engage interactions; and so on).

The Translate feature did provide access to the text of "Results Slide" and I was able to change it to Vietnamese.

However, when I imported that Word file, my translations of the Engage "titles" were set back to English.

So I had to get back into the Word translate file and put in those translations. No big deal. BTW, I'm using Arial Unicode MS as the font for all of this because Vietnamese characters can pose issues. Anyway, after putting the VN text for the Engage titles into the Word doc (and it displays perfectly in the Word doc) and reimporting it, and then publishing, those titles did not get exported to the output correctly (characters are no longer displaying correctly ... which previously did display correctly when input directly within Engage, and the same exact text continues to display correctly in the navigation area).

So the translate Word file is strange: the same exact stacked characters work for some of the imported text, but not for other (none of the ones I've put directly into the Word file [from a different Word file that I used to copy and paste into the Engage input areas]).

I just tried an experiment: the bookmark for the slide that has the Engage interaction, the title of which is not being exported correctly, is correct in the output. So I copied that text from within the translate doc from the bookmark area to the Engage title area and re-output. It failed.

It appears that in order to get the Engage title to correctly output in its bookmark I must enter that text directly within Articulate (versus using the translate doc). Wait, after coping the text from another spot from within the translate Word file, it appears that the text will export correctly. This tells me that it still continues to matter "how" the stacked characters were created, and use the methods that produce what look like stacked characters, but which are in fact not really stacked.

Oh no, after importing the translate Word file, all of my Engage interactions have been modified: the audio files have been stripped out, and new steps have been added (that had been deleted). Kind of a disaster. My gut feeling for not using the Translate feature has been justified, but I'm required to use it to translate that one, single element: the name/title of the Results Slide as it appears in the sidebar.

I need to manually edit the frame.xml file to strip out the ".jpg" in the bookmarks for Engage interactions that are Media Shows (filenames become the text of bookmarks in Media Shows and the only way I can figure out to delete the file extension is to edit the frame.xml file). Not hard, but it has to be done after every single publish. It would be helpful to be able to edit those within Engage (Engage shows them as they will appear, well almost as they will appear—the translated text actually is wrong within Engage, yet they output correctly—and unfortunately we cannot edit the bookmark text ... just view it).

I can have that text automagically translated by using translated text for the file name of the images, so that's good.

Thank you so much for your reply. I think it would be a good idea to have our Support Team take a look at your file and explore these issues for you further. Please use this form to submit a support case.

Thanks, I'll find some time to do that. Meanwhile here's a bit more info on the circumstances of when the Media Tours get modified/changed when using the Translate feature...

If, within the Engage Media Tour, the Interaction Title has already been translated, it appears that using the Translate feature does NOT affect the Media Tour (deleted steps do not re-appear and the audio associated with each step is not stripped out).

If, on the other hand, within the Engage Media Tour, the Interaction Title has NOT already been translated (that is, it is in English) and you use the Translate feature to translate that string, then deleted steps appear from the dead, and your audio files are removed from their steps.

Note that with the Media Tours I did not use the Translate feature to translate the "Type your caption here." element, so I don't know if that will have an affect, but my guess is that it would (bring back deleted steps and strip out the audio).

Does that sound right to you?

If that is correct, then what I'm seeing with using the Translate feature, is that when you use it to translate (at least) the title of an Engage interaction, that Articulate dumps the "extra" commands you gave to the Engage interaction  from within Articulate, and reverts back to the .intr file saved on your computer.

I'm not quite done testing, but it seems to me, and maybe everyone else already knew this!, that the save thing to do is to edit your Engage interactions DIRECTLY and not from within Articulate (so open them from a finder window, not from within PowerPoint).

You can check out the details about how your interaction is stored in Presenter by taking a look at this article.

As Christie shared previously, please share with our team via the link she provided if you would like our team to take a look.

We had some translation features that were corrected in Update 3. Can you please be sure that you are utilizing the latest update to Studio '13, which is Update 5.