Here is my SL file.

Can anyone help pls?

Some thoughts that I have that may help you.

These triggers on the Master slide are, at best superfluous: 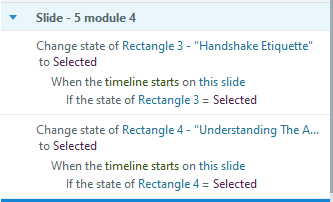 They are the equivalent of saying When you go to a room, if the light is on, turn the light on." At best, they may be just a harmless redundancy, but frequently creating triggers that change to one of the built-in states causes unpleasant conflicts with already existing triggers. To be safe, you should delete them.

This one will almost surely cause some sort of interference:

Clicking an object automatically sets it to the Visited state if it has one. Creating another trigger to do the same thing again seldom has a happy result.

That said, I think the larger problem is that the Visited and Selected states you want (and I can see from your design why you want them) are temporary and localized. They only exist on the slide where they are set. That's why they appear, then disappear. The Selected state shows until the new slide moves into place. The only way to make them persist to another slide is to do as you have done with the Completed state: Create a custom named state, and show it on the basis of a variable. Variable contents are the only elements that persist from slide to slide. Of course, that raises another question. On the next slide, do you want the learner to see the Selected state, the Visited state, or the completed state? Or do you want to create a combination state that shows either Visited or Completed, along with some indicator on the menu to identify the current slide? Here's a thought on how to do that, I put a slider on the master that indicates the current slide.
There are a lot of ways to do that, But I think all of them may require a significant investment of resources.

oh my!!! Thank you so much for this solution. I actually battled this for weeks before posting it here

I tried the slider option, it works  but it behaves in an unstable manner when I click on tab 3 “Making a Great First Impression” a second time. I also seem to have challenge aligning the slider (thumb) to fit in perfectly on the tabs.

Attached is the storyline file

Go to Slider Design, and set the initial number to 1 and adjust the top of the slider until the thumb is exactly where you want it. Then set the Initial to seven and go to the bottom and set the thumb where you want it. Be sure you change the length of the slider, not move it. If the rectangles are the same size and equally spaced, the thumb will fall on the center of the rectangles. Because not all of the rectangles have the same number of lines of text, that may not be aesthetically pleasing. If that's the case, give the slider a range of 1 to 70, or 140. Scroll to each rectangle and use the initial number to fine tune the thumb to exactly where you need it. With 10 or 20 steps per rectangle, you should be able to get it pretty close. Then set the trigger to that number.

Thank you once again. i was able to fix the erratic slide behaviour and also set the slider and thumb in the desired positions.

The picture of the man is on the slide, so it covers the items on the master. Notice how it overlaps the slide, which prevents you from clicking on the slider. Try cropping the picture on this and other slides.

I adjusted the images but still couldn’t get the thumb to point to tabs in the scrolling panel - eg. 'case study 1' and 'case study 2' tabs in the table of content in the attached file

Pls feel free to work on my attached file if need be.

Maybe I don't understand what you are asking. In the attached file, which I used to take the attached movie, I can scroll down and see the Case Study tabs. When I click on them, the pointer points to them. Is the problem that when it jumps to a Case Study slide, you see the top of the menu, and have to scroll down to see the bottom with the pointer? If that is the case, it is not a problem with the slider, it is a problem with the scrolling panel. Rather than a problem, I should say a trade off. Using the scrolling panel lets you create a menu that is larger than the slide, and scroll to it (which is an idea I like). The cost of using a scrolling panel is that every new slide opens with the scrolling panel scrolled to the top, and that's not something we can change.

So you have a choice - smaller menu tabs that all fit, or larger ones that start at the top on each slide.

A few years back there were some discussions about jumping to a spot in a scrolling panel using javascript. I don't remember how successful any of them were, but you might try searching for those discussions.