I have 3 text boxes that I've applied animations to so that they fade in by paragraph. I've set up the text boxes so that it looks like 2 columns of text. I want the first text box to finish its animation before the second text box shows up, then I want a third text box to appear with a note - after everything else has already been shown. I have it set up so that the first text box's animation duration is 10 seconds because there are several things listed and I want learners to be able to read each line as it appears. Then, on the timeline, I moved the beginning of the second text box to start at the end of the 10 seconds. But it's not working! The first text box is taking about 20 seconds to appear, but the second text box is appearing at the right time. So... the second column of text is showing up before the first column finishes. I don't want the first text box to disappear at all, so I don't want to make an exit animation/trigger. I want the slide to start with nothing but the title, then have one chunk of text show up slowly, a second chunk of text show up slowly, then a note to appear, so that by the end, all of the text is visible. How can I do this? I'm working in Storyline 2. I've attached a screenshot explaining what I want to do.

It sounds like there may be two things going on with your course. First, check out this screenshot to ensure you've timed each line of text in your paragraph correctly. If I understand what you're describing, the timeline should appear like this: 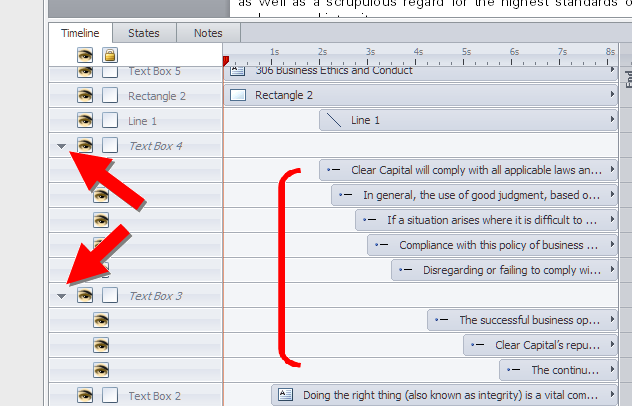 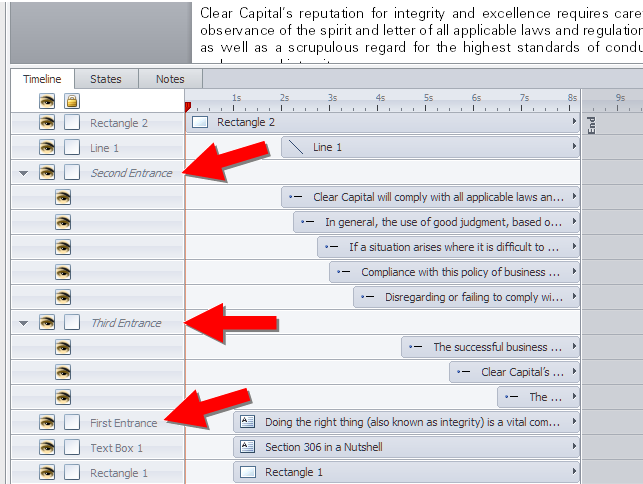 Thank you sooo much! That's what the problem was - I didn't even know I could use the dropdown arrow to see each line of text and move it along the timeline. Now I can fix it! Thanks!!

You're welcome! I'm glad to hear that was the solution, Michelle.

Glad  Cody was able to assist you here Michelle!

Hi Everyone!  I was wondering...how do you create two consecutive animations in a state?  I have attached 3 printscreens to show what I am trying to achieve.

I have a set of tabs going down vertically along the left edge of my slide (see normal state.png) below.  When you hover over a tab, the tab extends to display it's full name (hover state 1.png).  I also added a wipe in animation here by duplicating the extended tab shape into the state so that I had something to "tie" an animation to.  Now, I have added an additional box into the state that I have also attached an animation to (see hover state 2.png).  It is a wipe animation from the top down.  The two animation work, but occur simultaneously, though I would like them to occur consecutively, one after the other.  How can I fix the animation timing so that the box wipes in after the extended tab finishes wiping in (instead of at the same time)?  Hover state 3 is the final look I am going for.  Any help would be greatly greatly appreciated!