Within a second of that layer starting, the audio on the base layer stops.

The layer properties shouldn't be causing this: 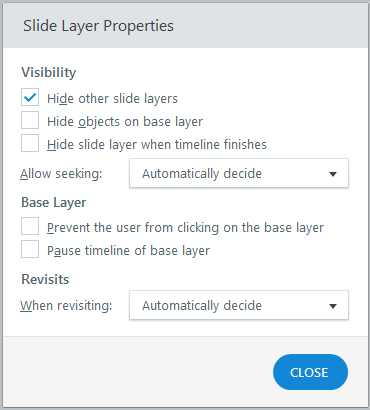 but I cant figure out what to do to keep the audio playing in the background.  I have tried re-adding the audio and changing the trigger for the launch of the layer but still the audio stops after a second.

My first trouble shooting step would be to load the slide and not show the layer. Does the audio continue to play? If so, the problem is the layer, or the method of launching the layer, or what's on the layer.

Can you move to the next slide, or is this a problem only when previewing one slide?

My third trouble shooting step would be to attach the .story file here, and see if somebody can spot the problem.