I have a slide with a scroll bar and hover states. Here's the tempshare. When you hover over the highlighted areas, sometimes the hover states appear UNDER other highlighted areas, and that's obviously not what I want. It's not consistent, though, and I can't figure out what's going on. I tried bringing all the hovers states to front (by going to each box, editing its hover state, selecting those boxes that come up and bringing them to the front). Any other suggestions?

I also don't quite love the way this works, I don't think the hover states are all that smooth. Sometimes they go away when the mouse moves off the highlighted area and sometimes they don't. (I know why that is, it's because the hover state will stay open when the mouse is in the squared off area of all the items in the hover state, but the user won't know that.) I'm open to alternative suggestions to achieve the same or similar results! The important thing is for those passages, we want to give the reader a way to read the passage on the document (the pdf writing is too small as it is), see how that compares to another version of the same document, and also see the feedback given by the evaluator.

Thanks for making me discover the Scrolling Panel !

As for your problem, this is quite normal behaviour because all your buttons are layered so every state of Rectangle 8 will be underneath states of Rectangle 9.

What you could do is make each button make its neighbour disappear.

At first, I thought you could just force Hidden state of higher button on hover but it won't "Restore on mouse leave", so just add a "Off" state to each button (empty state) except first one and add trigger to every button except the upper one to make the one above invisible : 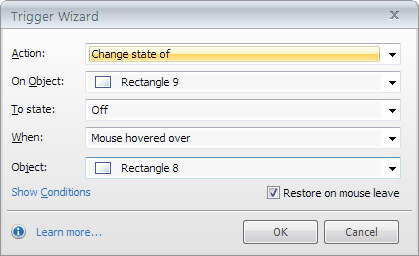 That might work, thanks! I'm concerned my client won't like that the "next step" is disappeared, though, so the user doesn't know where else to hover. I could change the stacking order of the rectangles, that could help. We'll see what the pilot testers think.

Hi Katie, As far as the second issue you mentioned where the hover states stay on when the mouse is over the corner of the box. You could do a hand drawn hotspot instead that would more closely follow the object you want to change on hover and then just have the trigger to the hotspot change it to the hover state.