I have a layer with multiple triggers on it and I want to change the order of them. However the up and down buttons in the trigger panel are greyed out and I can't seem to figure out how to change their order. I know this must be pretty simple.

I know it sounds simple, but try clicking on the Trigger AGAIN, and see if you can then do it

Sometimes it seems to need 2 x clicks, I have never figured out why.

Unfortunately that didn't work. Clicking on them in the panel multiple times doesn't change anything.

If that's not the case, then perhaps snagging an image of your trigger panel & uploading it with your reply will help us to assist you better.

That is it exactly. I have multiple triggers on the slide but they are associated with different objects. Consequently, as I understand, the order does not matter. I tried adding more than one trigger to a single object and the arrow buttons became live so those triggers could be changed.

I solved the same problem by copying and pasting each trigger in the trigger panel to get the triggers in the right order.

Then I deleted the original triggers.

Hi Fred and welcome to Heroes!

This thread is a bit older, but thanks for sharing your method here. Additionally I wanted to point out the information for you here on how the triggers will be executed in what order.

I just wanted to mention that if you have several objects with a single trigger for each then you need to create the triggers in reverse order.

I have text inside coloured shapes which change state (to disabled) as they're clicked, (see attached image). Because the yellow shape is at the bottom (I created it last) it isn't working through the sequence properly and I have to delete the triggers and start over :(

You can also move the triggers around using the up and down arrows on the trigger panel to change the order in which they'll be executed. Additionally you may want to review the information here in regards to how the Storyline triggers will execute and in what order.

I have multiple triggers on a single object and I'd like to change their display order--not their execution order--but the up and down arrows are grayed out.  For example, I have several buttons displayed on my slide and because they each have more than one trigger, I'd like to see them in the panel in the order they appear on the screen (to make it easier to see what I'm working with for each button).  Will I need to delete and re-enter them, or is there some way to get my up and down buttons enabled?

Those buttons will only change the order of triggers as they appear for each item or the player as a whole. You can't move the location of individual items such as buttons or objects in that list to have them appear in the order that you'd see them. This tutorial with the section on understanding Trigger order will also help you understand the set up for how they're displayed. Also, here's the order in which they'll be executed.

display order = execution order so if you change their order then SL will execute in that order which could cause issues in how your slide works.

Hi,  I've read through this thread and think I have a different problem.  I'm in SL2.  I have a Feedback Slide Layer I created with a continue button.  The screen let's the user answer the question but goes automatically to the next slide and does not show my Feedback Slide Layer.

The first trigger on that layer is the Continue Btn then the Feedback layer. I cannot move them.

Any idea how I can get this to work?

Thanks for the assistance!

Thanks for letting us know what you are running into and for sharing that image.

The image is for the layer, but this is the layer that is not displaying, correct?

I'd like to see what was on the Base Layer of this slide.

With your permission, I'd like to take a look at your project file to investigate what's happening. You can share it publicly here, or send it to me privately by uploading it here. I'll delete it when I'm done troubleshooting.

Guys, this may or may not work for you, but when I had the exact same problem as above and then followed @fred joly's advise, I also noticed that both the Copy and Paste buttons were also grayed out. Naturally, I decided to give keyboard commands the old college try and lo and behold....NOW all buttons are un-greyed!

I am experiencing the same issue where the up/down arrows in the trigger panel are greyed out.  My simple solution was to save my project, close SL and reopen it.  Regular functionality returns.

Hi, Terry! I made a response to this blog post earlier, which incidentally is right above yours as I type! Anyway, try copying a trigger using the Copy button to see if that helps you. It should save you a lot of effort

I've done that, but when I do, all the triggers jumble together. To resolve that, I have to change to story view then back to my slide.

That is interesting. By the way, have you recently updated Storyline? There was an update just last night. Hopefully this resolves your issue

I got the same problem with the latest update version of Storyline 360. I cannot change the order of the triggers and the up-down arrows are grey off. I cannot drag up or down with my mouse to order the triggers.

Note that I always update to the latest version.

It looks like users in this discussion were coming across issues that were pre-new trigger panel and may be unrelated. Can you share some specifics on where you're trying to re-order the triggers?

This user guide shows the trigger order and how you can rearrange multiple triggers. It would be helpful to see a screenshot or video, too!

Michael, I hope the triggers you want rearranged don't actually have to be in a certain order for them to trigger properly. There are times when the new trigger panel automatically grays out the Up/Down arrows on triggers that don't have to be arranged in any particular order (ex: when a variable changes on this slide, move an object along this Motion Path).

But if you're still having issues, what worked for me before was copying-pasting a trigger, deleting the original trigger, and then the Up/Down arrows show. I hope it still works in the new update, Michael

Latest update, also can't re-order the individual object triggers. It makes things messy and difficult to manage. Here is the order of my buttons on the timeline: 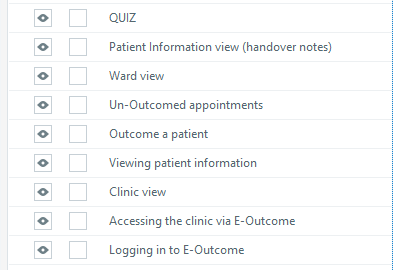 And the order of my object triggers; 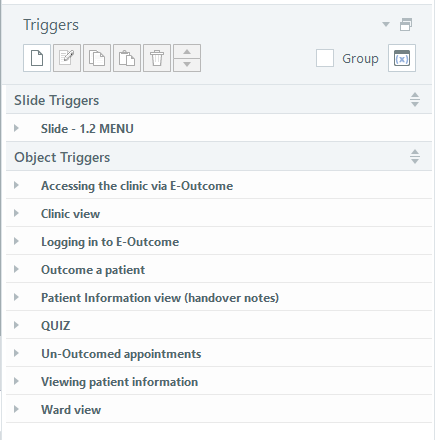 The reorder arrows remain greyed out when any are selected, nor can I drag them to reorder them.

Erin, I'm not sure what you're trying to do with these triggers. Can you open each object's trigger menus by clicking on their triangle arrows, then select a trigger to see if the reorder arrow appears? You should be able to rearrange triggers just fine in this update!

Otherwise, I think you're trying to rearrange menus of object triggers, not the triggers themselves, do you know what I mean? I see in your Timeline that you have a specific order, but maybe they're not necessarily created in the same order as what you're showing, which is why the menus are showing in a certain order. But even so, that shouldn't have anything to do with when they're triggered.

Anyway, by design, you shouldn't be able to, nor do you need to rearrange menus of triggers. But depending on what you're trying to do, you do need to reorder the actual triggers within each object.

I looked at one my projects and it works exactly as I described it - see the attachment. But maybe I'm not seeing everything you're seeing. Maybe it's just a weird bug

I continue to have the same issue, can't move slide triggers to enable me to see what I'm doing. And, since we can't scrub the player in edit mode, having slide triggers able to be dragged into a logical order would sure help build the slide.

Crazy thing is occasionally, like once yesterday it did work.

I see how it can be frustrating for you to not be able to change trigger orders the way you want to. But I think with what you're trying to do, and with how the new update makes things work, it looks like you don't really need to change any trigger order as long as the triggers get switched in the sequence you want to.

For example, I see that you wanted to Pause the timeline when it starts....it's going to trigger this action at the start of the Timeline no matter where it's ordered at the Triggers panel! So as long as it all works the way you wanted, it should be fine.

But it's still a little frustrating, I get it! What helped me in dealing with this issue in the past was copying and pasting one trigger, deleting the original trigger, and then the UP/DOWN buttons show for that trigger, fixing this issue. But I don't know if that still works in this update.

Pam, why don't you send Articulate a ticket with that screenshot you took? Can you also show an example of triggers that actually do need to be triggered in a certain order for it to work - let's say, you want an animation to complete first, and then it moves to the next slide?