How are you currently doing them? That is, are you positioning them along on the timeline? Or are you using states?

We are changing them on the timeline.  I'm guessing we should be using states, creating a custom state with the pose(s) we want the character to take.  Correct?

I learned one way to do this when I attended the Advanced Articulate Certificate program by Training Magazine Network. That session demonstrated how to use cue points with the character states. I had a slide layer where I wanted the character to point out different lines of text as they appeared on the screen.

The first step was to make sure the character had the states I needed. I selected the character with the pointer at the highest position as the Normal state. I then added three more states that I named point1 point2 and point3.

Next, I needed a way to bring in the character's states at the time I wanted. The way the webinar explained, I would setup objects that I could use to trigger the character change at cue points.

Because I wanted to do this with animated text, I created the text box with the bullet pointed text. Next I clicked the Animations tab and in the Entrance Animations area clicked the drop down under the star and selected Fly In from the bottom.

I needed something to make the character change. I created three rectangle shapes. I formatted each shape with no fill and no line and placed each one on top of the animated text. I also named each shape point1, point2, and point3. 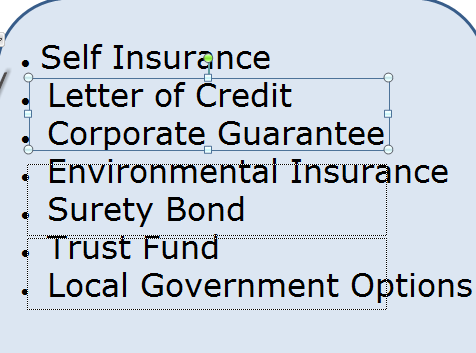 Next, click the TImeline tab at the bottom of Articulate. I guessed that the objects should fit on the timeline about 1 sec. apart. I create cue points at 1s, 2s, and 3s on the time line and then positioned each rectangle at each cue point.

Note that the text would begin appearing at the beginning of the timeline so the Normal state would be first then the first change would come at point1, etc.

The last step is to create triggers that would change the state of the character to point1, point2, and point3. The trigger wizard looks like this: 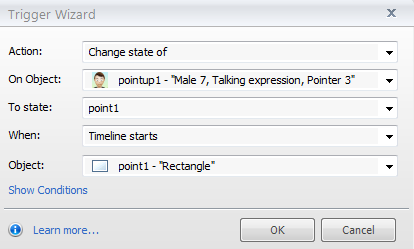 The last step was to preview the slide and watch how it all worked. I ended up changing the cue points to just over the 1s etc. mark and that made it seem to flow better. I had tried to just put the characters on the timeline but using the method above seemed to make the entire animation work better and smoother.

I hope this answer works for you.

Hi, I know this is a few years old, but I'm working on a character transition now so it came up in my search. I know that they were using the timeline starts of the rectangles to trigger the state changes of the character, so I was wondering if you would really needed the cue points? I couldn't decipher what they were really used for.

This discussion is a bit older - but if you were using Storyline 2, you could actually cut out the rectangles all together as we added the ability to trigger an event when the timeline reaches a particular time or cue point. So hope that helps!

Thanks. That must have been before SL2 which is what I'm using so I didn't
understand the need for having double triggers for the same action. I was
able to create a decent enough transition effect so I'm good for now.

No worries Dean - glad I was able to help!