So, any reason why closed captioning would appear for some browsers and PCs, but not others?

I have a course with three CC videos. The first one works - I click the icon and there it is. The second and third video used to work, but now when you click the button, no CC.

I noticed it happening in my Chrome browser and mentioned it to my client. They said they could not see the CC either. But when I talked on the phone with client, he could see it in all browsers he had. Then I checked it on three other computers and on my primary computer's Edge and IE browsers. Works fine. But not in my Chrome, which I updated to Version 69.0.3497.92 (Official Build) (64-bit).

So I did my usual drill to test for corruption. I put a new copy of the video on a new slide - still no CC in Chrome. I created a new Articulate file and only added the video. Get this - the CC appeared in Chrome, but behind the video (I could see the bottom peaking out).

Is the CC corrupted or something? Why does it work on other computers and in other browsers? I mean, I'm torn between not being able to reproduce it and saying it's on their end, but I kind of can reproduce it in one environment.

I see CC everywhere except on Chrome on one particular PC. Any insight would be appreciated.

Hello Hadiya, so glad you reached out!

It sounds like you're seeing really inconsistent behavior with the closed captioning. We've seen similar problems with captions in Chrome, and it's all related to player size.

In addition, we're seeing that captions are completely hidden if the video covers the entire slide.

I really appreciate you sharing your Articulate Review link with us. The more examples we can get of this issue, the better! As soon as we get it resolved, I'll pop back in to let you know.

Hey Hadiya. I'm excited to let you know that we just released update 21 for Storyline 360! It includes new features and fixes - check them all out here.

One of the fixes addresses an issue where closed captions sometimes disappeared in HTML5 when using the classic player.

Here’s how you can update Storyline 360 to take advantage of everything the latest release has to offer. Let me know how you make out!

This isn't working for me either, but it doesn't even work in preview mode. Please see attached.

It looks like you've included the video transcript on a layer, but I'm not seeing any transcript text on that layer. Did you mean to include text there? 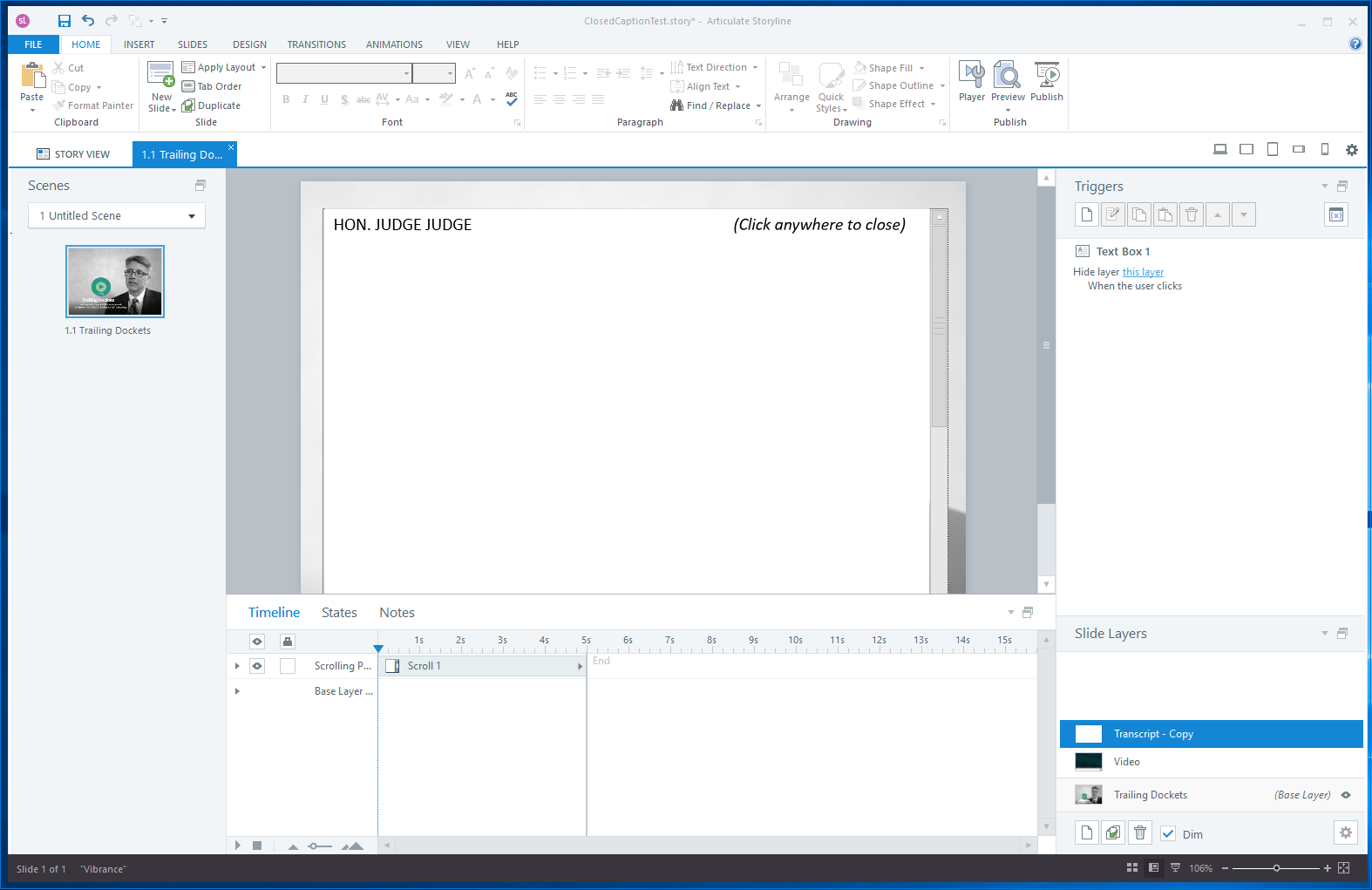 The transcript text is associated with the video, as I uploaded a .vtt file. I have used this before and it hasn't mattered whether it was on a layer, right?

Hi Sarah, thanks for clarifying that!

This appears to be a problem with our most recent Storyline update, Update 22. If the video is on a layer, the captions won't appear.

Until we get this sorted out, you can try rolling back to Update 21 -- here's how.

So sorry for the trouble this caused you. As soon as we get this fixed, we'll let you know!

Sure, but should I first try to change it off of a layer? I could definitely do that.

Yes, you could absolutely do that! I made that change in your file, and it works perfectly. You can check out the updates I made to your file in the attachment here.

I wanted to share a quick note about today's update to Storyline 360, build 3.23.17480.0. It fixed an issue a few of you were running into where in some cases, closed captions were missing when audio or video was on a layer.

Let us know if you run into any trouble with that update!

I'm having the same problem. It shows on and off in preview (not consistently) but it does not show at all ionce published to Articulate 360 Online using either CHrome or IE.

Sorry you're at this roadblock, Fernando. Happy to help you get this sorted out!

First, what version of Storyline are you using? You can find this detail by clicking on the Help tab, then About Storyline.

Next, with your permission, I'd like to test your .story file in a similar environment to try to find the culprit. If that works for you, you can share the file privately with me by using this link. I'll let you know what I find, and will delete it after troubleshooting.

Man, this is frustrating.  I am also having issues with the CCs.  They do not show on the first 2 slides for some reason.  They do not work in either chrome or IE,  and I have just updated the 360 version and republished everything - to 360 and to LMS, as as not to be in preview mode.  Not working.  I've changed all sides to default player settings and have published with closed caps option not-checked (to reset)  and checked.  Still same issue.   I need to finish this project and may just have to go back to add the old CCs in with triggers - which will take another 8 hours.  What's the deal here?

The issues that users ran across in this forum discussion have since been resolved with updates.

You mention that you are utilizing the latest update, so I'd like our team to take a closer look at your file if possible.

With your permission, you can share your project file with our support engineers to investigate what's happening. You can share it privately by uploading it here. It will be deleted when troubleshooting is complete.

Hi, Michael. Sorry to hear you've come across this issue.

While the folks in this discussion reported issues with closed captions in Storyline 360, I'd like to help investigate the behavior you see on the latest Storyline 3 update.

Do you notice that closed captions are missing when they're on a slide layer, or do they disappear when viewing the published content on Chrome?

Let me know if I'm off-base, as I'm happy to keep digging!

I wanted to report that I have encountered this issue in the most recent build of Storyline 360 (version 3.25.18009.0). I am going back to 3.23 to see if I can get the CC to work properly. Just wanted to bring this to your attention.

Thanks for letting us know what's going on. Can you tell me a little more about what you're seeing?

Yes, they are missing....I too am digging into a work around for this issue.  I used a video on layer that needed CC.  worked in preview and not on the finished output, HTML5/flash.  I now have the video on it's own slide w/CC and it works with the forums help.  Locking in the player window also helped.  I just had to dig like others to find a workaround for this issue...thank goodness because I build coursework for our service members at the DoD. I was trying to link one video that produced a lightbox effect over a slide (this was used over 30 times) and for me to keep the file size down, the lightbox was it, It just doesn't work the way one thinks it does.

Thanks for those extra details! Let me see if I've captured what you're seeing.

You started with a video on a layer, but the closed captioning would not appear when the video was on a layer. Then, moving the video to it's own slide on a base layer resolved the issue. Is that right?

This does sound like a bug we're investigating in Storyline 3, and we're targeting to have it fixed in the next update. So sorry for the headaches it has caused you!

Good news! We fixed the issue you reported where there were issues with some closed captions disappearing on Chrome.

Install the latest Storyline 360 update to take advantage of all the recent features and fixes. Here's how.

If the problem happens again, please record a Peek 360 screencast for me, and I'll be happy to help!

Ashley, does this update cross-pollinate to SL3 users?

Hi there, Michael. Yes, you should also see this working in Storyline 3. Let me know if you are having any issues! Helpful information for me would be: player and browser settings, and where you're hosting and viewing the output.

Hi there, I'm having this issue where the CC button doesnt appear in FireFox. My file has a video on the base layer and the files is published as HTML/Flash. The CC button works fine in Chrome and IE but doesn't work in Firefox. I have to refresh the browser once or a few times to make it appear and if I refresh again the button disappear again. The player in set to the original size in the browser.

Is there any workaround or fix for this?

Do you know if you're viewing the Flash or HTML5 output while in Firefox? Also, what version of Firefox are you using?

If you're able to share a link to the course I'm happy to take a look and give it a test, as I don't see any reported issues with the CC button going missing in Firefox alone.

I am having issues with closed captions of my videos. I have created the captions using the Storyline Caption Editor. But they do not appear in my published output. Here is a sample file.

Please can you look into this.