I am trying to set up a slide with text examples that reveal when hovered over and then can be selected when the used clicks. I've managed this portion, but once a user a selected an example I don't what it to change if they happen to hover over it again. So just in summary

What I don't want is the shape to change back to visited from selected if the user hovers again (unless they click to de-select) and this is where I'm stuck.

My trigger is set up as per screen shot, which I thought would solve the issue but it hasn't and I am going around in circles! 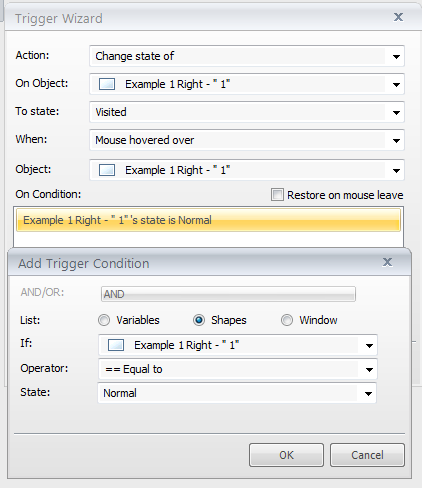 I've uploaded the slide so you can take a look

p.s there are some other trigger for points scoring that can be ignored for this (unless they are somehow part of the issue!)

Hopefully someone in the community will be able to assist you with this design.

I attached your file with an additional slide in it. Take a look at the 1st block, which simply utilizes the built-in states. It may be closer to what you are looking for. Just a thought.

Just to add, the forums are great! I've only been using Articulate for a few months, without any formal training and I've been able to find the answer to most of my questions either in the tutorials or on one of the forums.

Glad to hear that Laura and thanks for sharing :)