Controlling the ability to advance slides

Hi! I am trying to keep my slides from being able to advance until the audio track has played and am stuck.

I created a variable for each slide (named the slide, then put 'true/false' for type and 'false' for the value, then created a trigger saying 'Jump to next slide when the user clicks the next button if [name of variable] is equal to True'.

The slides aren't advancing at all.

However, my first slide works - it has an object variable and the others don't. I have no idea how I created the object trigger (set for Sound 1: Set [name of slide] equal to true When the media completes)...I am pretty sure I did the same thing for every slide when I created the variables and triggers so I don't know why this one is different or how to recreate it for the other slides.

If someone could explain how to do this I would be very appreciative!

Hi Jen, so I assume that you want the slides to advance automatically but only when the audio finishes playing - is that Correct?

Unless I am missing something, you should not need variables for this at all.

Create a slide trigger that says jump to next slide when the timeline ends. I think that should do it.

Would the restricted navigation option work? 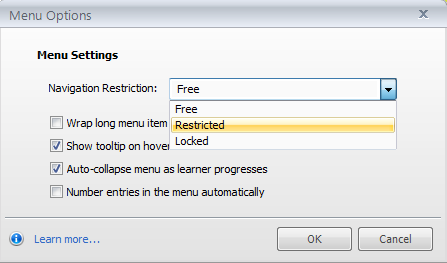