In a project I'm working on now, I have screencasts that I created while in Storyline of a website (I'm making a software tutorial) and realized that a video on a slide is different than the screencasts, so I'm not sure if I can use the same buttons I could with a video. I'll attach a section of the project so you can see an example (I left the player with navigation controls for this).

Should be putting some type of custom control on the Master slide? When I've tried doing this and set the triggers to play or pause on variable “isScreencastPlaying”, the screen cast doesn't appear as an option on the master. When I create the "buttons" on each slide, it does not seem to pause, and the screencast plays automatically. On the example attached, I made the buttons I learned how to make for a video file, but set the media to the screencast instead of a video, so it’s probably not working right at all.

Or, maybe the better question is can you set the initial state of the screencast to not playing? Like you can do with a video file (Movie Tools > Options > Play Video: From Trigger)

Any help, advice, or suggestions would be greatly appreciated! The ultimate goal, is that the two play and pause buttons would be layered on top of each other, and using variables would 1) start the screencast; 2) clicking the play would change the state of the play button to hidden and would show the pause button ‘underneath’; 3) and vice versa when you click the pause, that would hide it and the play would show again. It might be that it is just the two play and pause next to each other, which is okay too. Maybe I should flip the order so that the pause button’s initial state is normal and the play buttons’ initial state is hidden?

I may be over-simplifying this, but we'll see :)

How about just creating a "Pause" layer in your Master? You can place the custom pause button on the base layer, trigger that button to show another layer. Place the "Play" button on this layer and set the options for the layer to "Pause the timeline of the base layer". From this layer, you can also hide the custom "Pause" button. This way, you don't have to worry about altering the states.

You won't have to use any variables here.

I've made a new layout with this set up in the file you shared. While I didn't replace the image you were using along the bottom - that threw me for a little bit of a loop, btw :) - I did apply the test layout to the slides.

Also, and I hope you don't mind, I removed a placeholder from the Master so that the full background of your design shows through. I did this because it was causing some white "gaps" along the top and bottom.

Check it out and see if this works for you.

This looks perfect! Yes I think was getting a bit ahead of myself (or at least trying to!) with the variables... at least with the screen cast. No I don't mind at all that removed that -- I was actually trying to and couldn't figure out how I got it on there! I will try and use this template on my project (which has several screen casts) and hope I can get it!

Thanks so much for sharing the update, I appreciate it.

Have an awesome day, Stephanie!

So Itried applying exactly what you did to my project, and it's not working quite right. I'veattached the slides from my actual project that I tried applying what you did - would you mind taking a look to see what I'm missing? I’ve appliedthe layout PAUSE LAYOUT to this scene (slides 1.2 – 1.5) and it seems like the play and pause buttons are working, but the screen cast doesn't doesn't pause at all… I’m perplexed! Could it be because of viewing in preview?

I took a quick look and I think I see the problem - the layer in your Master slide isn't set to pause the timeline of the base layer. You can change this option by clicking on the cogwheel for the "Paused" layer. 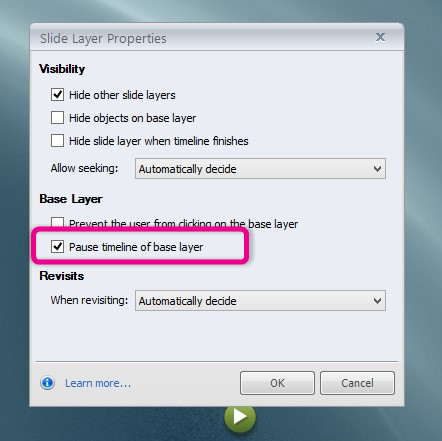 I have 5 screencasts and when I publish they only have a forward and back button.  is there any simpler way than the above ^^ to just add a pause button next to the forward/back?  I am very new to storyline so I'm lost in the above explanation.

Are you referring to the Previous/Next button as a part of the player? Those buttons will jump between slides and are something that you could edit their behavior through the use of triggers on each slide.

You'll also see the play and rewind button if you've enabled the seekbar as a part of your player (see the arrows). 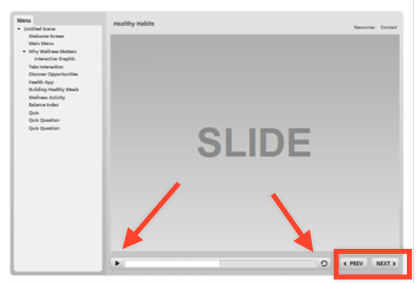 If you're looking to edit something else, want to share a screenshot? That'll help me point you in the right direction!

Hi Debra! Do you have the player seekbar enabled? That would be the easiest way to add a pause button to the player.

Let me know if that's what you had in mind!

Looks like you've stumbled upon a thread looking for a custom solution, so that could certainly be why this is a tad confusing.

You can enable a standard seekbar in your slides via Player Properties like you see in this image: 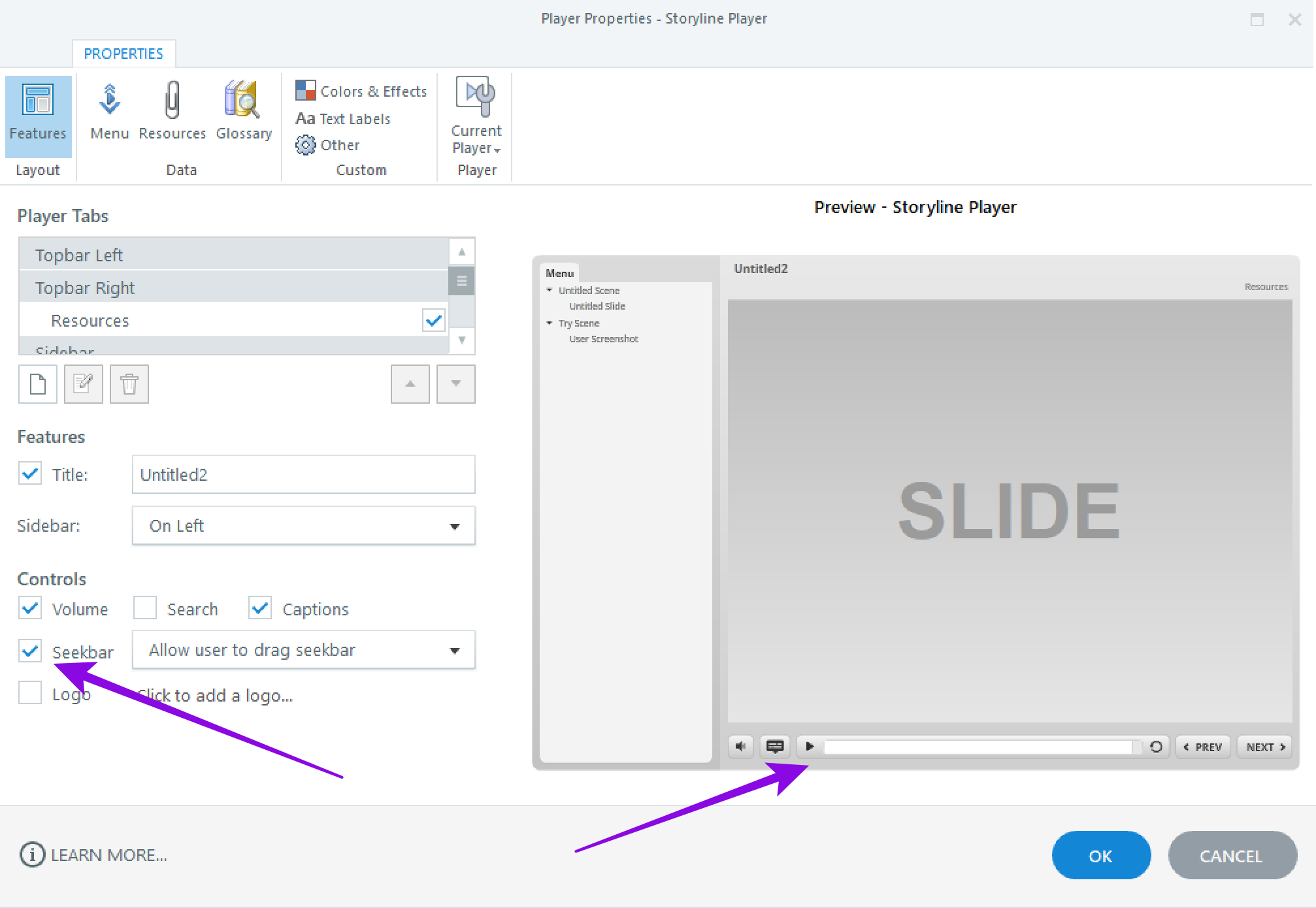