How can I delete the first video so that the second video will replace it on the intended slide? Thanks!

Just to be clear, only the second video is actually "in use" in a slide, correct? If the first video, with the same name, is listed separately in your recordings, you should be able to use the option for "Delete unused recordings". 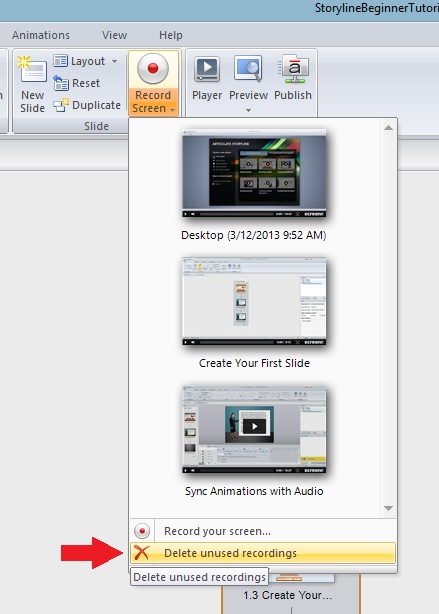 If you're still unable to get the extra recording deleted, can you share the .STORY file here so I can take a look? You're also welcome to send it over to us privately.

Thanks and welcome again!

Good afternoon, Christine, and thanks for the welcome and response!  This is my first venture in the Forums.
Actually, I think I unwittingly created this monster problem.  When I was unable to figure out how to revise my initial video on the original slide, I duplicated the slide.  Then, I created a new video on the second "duplicated" slide, but made the mistake of giving it the same name as the prior video.  So, at that point, both videos showed up in the queue as "In Use".  Next, I deleted the original slide, thinking this would disable the first video.  This did not happen.  Instead, the second duplicated slide maintained the link to the first video that I was trying to also delete.  Thus, I have not been able to dis-associate the second "duplicated" slide from the first video, or delete the first video, or replace the first video with the second video.
I would really appreciate your assistance in figuring out how to get out of this box.  Thanks!
P.S. I have a case # 00326054 that Sid Apolinario has responded to, and I provided him a zip of this Storyline file.

I took a look at the case you submitted (thanks for the number!) and I did find the .ZIP file you uploaded. Now, I'm not sure if Sid will be able to work with those files. It looks like it may be the published output content. If that's the case, we may not be able to modify the course with those files. Sid may request it, so it probably wouldn't hurt to go ahead and send the .STORY file as well, using the link he sent you.

If you're able to upload that file, just let me know. I'll take a look and see if I can help out. If not, hopefully Sid will be able to share some suggestions or solutions.

Hi, Christine!  I will go back and use the link to upload the .story file.  Thanks!

Good morning, Christine or Sid!  Just wanted to check back with you this morning.  I did upload the .story file yesterday (3/28) afternoon.

Were you able to make sense of my two problem issues?  If so, what can I do to remedy these issues?  Thanks, and HAPPY GOOD FRIDAY MORN!!

It looks like Sid is actually testing the files as we speak. You should receive some information form him soon. I'll be sure to keep an eye on the case, as well, so I can share any updates.

Thanks! I hope you have a fantastic Friday!

Happy Good Friday, Miss Christine!  I received a note from Sid this morning indicating that there was no current fix and suggesting that I submit this issue as a feature for improvement considerations on future versions (which I did).

Thanks for your assistance and attention to this case, and have a great weekend!

Thanks very much for the update! I would like to see this as well, so I may follow your lead on the request

Thanks again - have a great weekend!