Has anyone seen an issue where bullets are spaced differently on different computers? As a test, I created a textbox and filled in in with bulleted text. I had a coworker open the same file and take a screenshot to compare. In their screenshot there is less space between each bullet. The more bullets you have the worse it gets. This is an issue because we have several people working on the same files and text is aligned to other elements. Both computers are using the SAME version of Storyline, both have the file copied locally to their machines. The screen resolution and text rendering settings are the same. Line Spacing is set to 1.0 on both tests.

It should be noted that the same test was done in PPT and the issue was not present. It only seems to happen on unordered bullet lists, not numbered ordered lists or text without bullets.

Here is the screenshot side-by-side comparison. I added numbers to illustrate how they eventually separate. Each bullet adds an extra pixel per line.

Here is the same screenshot overlapping to illustrate that it adds a pixel per bullet.

I can't say I've ever seen this before - you mentioned the same resolution - are you both using the 96 DPI described here? Using anything different could be causing odd behavior within your Storyline files. Have you also checked that both computers are using a slide zoom of 100% ?

Yes, both computers are configured identically.

Do you have a sample file we could take a look at? What version of Storyline are you using? SL 2 or SL1 - if the latter, which update are you operating with?

just throwing my two cents worth in. If you highlight the text box and right click > format shape > text box...are all the settings there the same? Text layout, autofit, and internal margins...just a thought.

Wendy, thanks for the response, but I gave the other person the same file so there wouldn't be any differences there.

Are you using different zoom settings, text only displays correctly at 100% zoom

Yes, everything in both screenshots is identical on both computers. It shows up the same way on a published file. The difference is not in any setting, preference or resolution, but in the bullet rendering itself. We have tried it with 3 fonts (Arial, Verdana, and Articulate) and each one does the same thing.

It may not seem like a big issue, but we have highlight boxes and other elements that need to be lined up to overlay specific text. If one user develops it to how they see it looking right and then hand it off to another user (as is how our process works), the second user would need to adjust each box/element. But if the first user gets the file back, everything will be messed up for them.

I'm no techo...but I found this about font smoothing...not sure if it has anything to do with your issue.

"How about your font smoothing settings - are they the same (none/antialias/ClearType)? That can change the width of a given text

How are you and the other users sharing the files back and forth? You'll want to follow thecollaborate method detailed here.

Could there be any other differences from your computer to one of your other colleagues? Such as different Windows, Office, one operating in a VM, etc.?

Hi, This still seems to be an issue.

I have had a project which I have aligned text perfectly in a screen, but when I open up the same file on my laptop, it is all mis-aligned.

Have also had this happen when opening up a file a colleague was working on and the alignment of images and text is not aligned to how they were seeing it on their machine.

Would be really good if this was looked into and fixed, as it can be very time consuming fixing alignment, only to have it break again when handed back to my colleague.

I'm curious if you and your colleague both have the same DPI setting. Articulate Storyline requires Microsoft Windows to be configured with 96 DPI (dots per inch). If Windows is using a different DPI setting, you may experience erratic behavior, such as:

Hi, It is not this that is a problem. Have just tested this on my laptop, with the course I was having the same issue with, and it is still happening, even when the dpi is set the same.

Hmm, that's interesting. Are you also both working with a zoom setting of 100%?

One final thing to check would be the position of the objects. Right-click the object > select Size and Position > select Position > verify that the horizontal and vertical positions are the same on both computers. 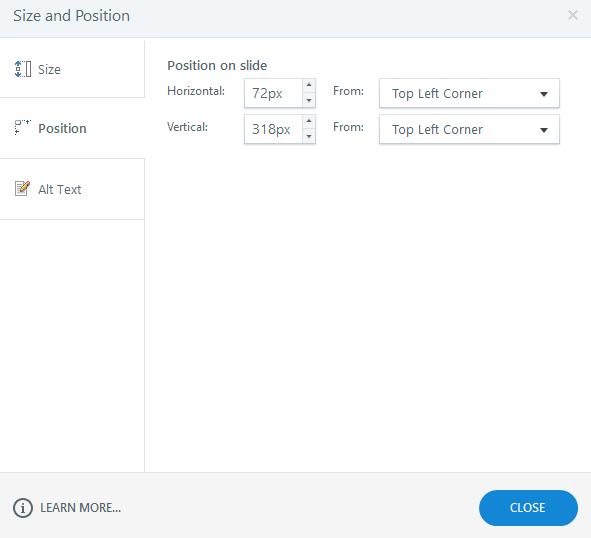 Yes, we are opening up the exact same file but on 2 different computers, so alignments are the same, it just seems like the text spacing is different.

I have another colleague who has opened up the file and she is seeing the same as my other colleague, but for me the text just doesn't line up with the graphics (or in 1 case the tab spacing are all mis-aligned)

Thanks for popping back in with an update, Joanna.  At this stage I would recommend reaching out to our Support Engineers directly so they can investigate with you to get to the bottom of this as quickly as possible. Be sure to share your case number here so I can follow along and post updates for others who may encounter the same issue in the future.

Thanks Alyssa, I have sent a request to the support link and here is my Case Number: 00959473

Hi Joanna, thanks for sharing your case number here. I see you're working with Abel - you're in great hands! I'll continue to follow along as your case progresses and add updates here for those who may encounter the same issue in the future.

Hello! Was there a resolution to this case? A colleague and I are having the exact issue with bullet spacing while collaborating on a file in SL2. The spacing looks completely different when opened on 2 identically configured computers, with a clean file on one, and complete text overlap, wording in margins, different margins, etc when viewing the same screens on the other laptop.

Hi Renee! Thanks for reaching out here. It looks like our Support Engineers are awaiting Joanna's file for testing, so there was not a resolution to the case.

Can you confirm that you're following the guidelines in this Recommended Workflow for Collaborative Network Environments?  You mentioned you're using identically configured computers, so you'll want to confirm they are both using the 96 DPI described here. Using anything different could be causing odd behavior within your Storyline files.

If you're still having issues, it would be helpful if you could share your file with our Support Engineers for further testing. They're available 24/7 and will work with you one-on-one to get to the bottom of this!

Hey Renee - I took a look at the case number shared above and it looks like we did not get any further information from the user, so I do not have an update to provide on the issue. Have you checked all the configuration, including DPI, as shared above?

Having same issue as documented in other user's experience above with the text alignment of bullets being off when sharing development of a storyline file. it's been 11 months. Was there ever a solution or fix provided for this issue? I'd like to resolve this.

BTW...figured out the issue on mine. Check to make sure that any developers working on your shared SL file actually have the font used in the asset installed on their computer. Even though working with the same file, your other developer might not have the font installed on his/her system. It may show the font name in storyline in the font field when authoring, but if the font used isn't actually installed in the developer's computer in the system font directory, it will be treated differently and thus view differently after they save it and pass it back to you to work on.

Glad you were able to get this figured out Laura and I appreciate you popping back in to share your findings and experience with the community :)