Flash once equivalent in Storyline?

So I believe one of the coolest features of presenter, or powerpoint, depends how you look at it, was the ability to create animations using the flash once animations.

Frankly, I have made some simulations using this that were pretty complicated. Storyline is great but im not sure that giving up on flash once, motion paths, and a few of the other features is going to go over well with me.

Is it possible to create these types of animations and effects or should i just start giving up on them?

Any alternative or way around this limitation?  Using fade in and fade out with very fast speed does not work, I tried it.

I see massive power in storyline but im beginning to think it's just a bunch of talking faces. :( Hardly interactive.How am i to simulate using a paper cutter or cutting out a paper snow man with storyline?  Maybe its just not the right tool.  But how can one merge presented and storyline into one project?  I'm under the impression this is not possible. I'm thinking of the frog demo from a long time back, is this possible in storyline?

How does one make an object move from one side of the screen to the other in storyline? Fly out doesn't cut it because i might want the object to go from left to right then up for example.

Ok so I seem to have found a few ways to do this with just making the image disappear.

There were a few solutions found here:

My question then is, can we set objects to have a duration of less than 0.25 seconds.

The solutions found in the thread above do work but make for a choppy animation because 0.25 seconds is longer than you want each item to appear on the screen for.

Can we polish this method anymore or do we just go with it?

Hi Matt! Yeah, we are working on enhancements that will eventually allow for more animation flexibility, so stay tuned on that.

In the meantime, one thing that has really helped me with regard to not having motion paths, is to explore new & creative ways of using Storyline's drag and drop features. In fact, it's funny that you mention the frog demo that Tom blogged about awhile back ... I was just thinking about that one the other day, because Tom originally built it in Presenter to emulate a custom course that incorporated a lot of drag-and-drop. Since Presenter doesn't really have a way to incorporate sophisticated drag/drop activities, he opted for hyperlinks and motion paths as an alternative. Now that we have much more robust drag/drop flexibility with Storyline, it's really fun to experiment with giving users the control over the motions on objects!

I was playing around with some ideas on this earlier today, and I thought you might like to see the following example. You can view it on an iPad too, if you want, or in html5.

Here's the source file in case you'd like to look at that. 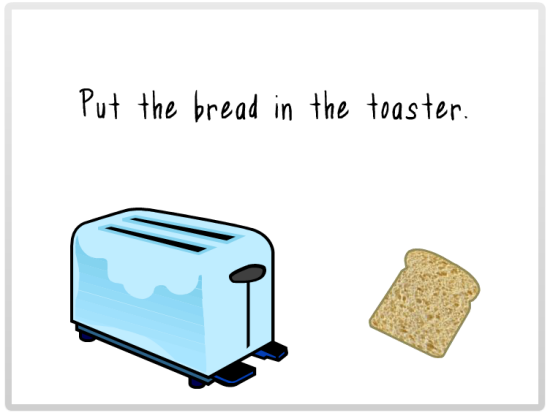 ok ok, you got me.  That woks pretty slick. I'm still very new to storyline. 2 days!

And clearly we can make the drag and drop interaction do quite a bit!

Thanks for the demo and the help. It has opened my mind to some more possibilities.

Happy to help, and definitely if you have something in mind that you want to build but aren't sure how to build it, start a new thread in the forum and we can jump in and noodle on it with you!

One of the things I've been thinking about lately is how to replace what would normally be an animation with the user moving an object. So instead of adding an animated object, ask the user to move it from one place to the next. It's not going to replace animations or be the right solution for everything, but it's a way to get the user "touching the screen" and interacting with objects on the screen.

I'm thinking about a cases where a machine moves in a specific way and a free form drag this object anywhere on screen would not work for the interaction.

Think of a slot machine where the lever is attached to the machine and needs to move down. I would want the user to use the lever like a drag and drop but the lever would need to move along a path and stop. If it didn't it would look like they broke the lever off the side of the slot machine!

My idea here would be to use a hot spot then animate the lever going down but since there are no motion paths it's clumsy to have background layers to hide part of the animation when using an off page entrance effect like in the toast example where the toast flies off the page.

I've used the method Tom suggests for drag and drop returns. I think it works.