Hello all - I'm very new to Storyline and still figuring things out. I felt triumphant after creating a jeopardy game that had a working avatar. I copied that game to create a bingo game that would be similar; however, I find that the avatar isn't working on the bingo game. What am I missing this time around? Storyline files are attached.

Update: Attachments removed while I work on them...

So happy to meet you here in the E-learning community.  I myself am very new to Storyline and learning everything I can!  I totally hear you on that feeling of triumph after a successful creation :)

I'd love to hear if you ended up figuring this out, or if the support team was able to assist. In the meantime, I'd be happy to download your files and take a look to see if I can catch the issue.  Since I'm a newbie,  I'll take all the practice I can get!

This is a screenshot of the triggers on the first slide of the Bingo game, and there several things I can help with. 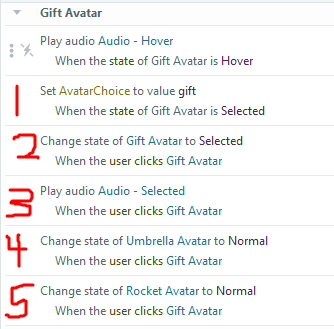 You have been very creative with how you have created triggers to cause actions to happen. Nothing wrong with that, but there are some built-in shortcuts in SL that can make your life much easier, and your work more efficient.

Trigger #1 - States can be somewhat tricky,especially if used in the when part of a trigger, so the best idea here is to set the choice when the learner clicks Gift Avatar

Trigger #2 - If an object has a Selected state, it has built-in superpowers that automatically change it to Selected when it is clicked. Creating a trigger that does the same thing can cause conflicts that can occasionally have spectacular, but seldom useful results. It's better to use the built-in ones.

Trigger #3 - This is a well written trigger.

Trigger #4 & 5 - Let SL do the work here. Select the three avatars and right-click them. Choose the Button Set option, and choose Button Set 1. By doing this, you make the three of them a set. That means that only one of the three can be selected at a time. Selecting one automatically sets the other two to Normal.

Of course, the same changes need to be made to the other two avatars.

I think the problem you refer to with the avatars not working is that they don't change state on the second slide. I can give you some useful information as to why they don't,  Here is the screenshot from slide two: 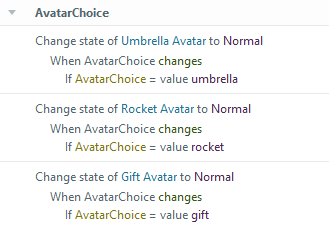 Since you are new, I think the best help I can give you is to have you figure out how to fix them.

Hint - Compare them to the triggers on slide 2 of the story that does work right.

So kind of you to share this!  Appreciate you chiming in with all the help. Can't wait to give this a try myself :)