Help with layers and a completion variable

Hi! I started out using what I thought would be a good idea for starting a course. I used one of the amazing existing templates online and decided to "rework it" to suit my needs. Well hours of troubleshooting and frustration later, I am coming to the conclusion that I cannot set variables to show completion when using layers. I used triggers for what I needed to occur in each layer and on the main page, as far as icons and states changing. But After the learner has visited all of the layers. I wanted to show a completion/congratulatory message and that they should close the window to return to the primary course. I cannot figure out a way to do this? Have I wasted time trying or IS there a solution? I know how to with slides and an overall project and even tried that but it defaults to the one slide instead of the layers.

Without seeing your .story file it's hard to make a suggestion, but you are describing sounds entirely doable.

Do I just upload it here?

This is a sanitized file but still has the same layout. I am trying to get a completion page/ congratulations page to populate after they have finished all the layers. With slides, no problem but just can't get the variable for the layers. I tried adding various triggers but it didn't work.

There are a lot of things I don't know about your plan, but here are some suggestions. The way it is designed, It looks like the years can be visited in any order. If that is not your intention, you need to design it so only the first can be clicked, and after it is visited, the next one becomes visible. For a serious timeline, I think I'd chose that option: Learner clicks icon and sees layer for that year -> learner clicks "I'm done" button, which has two triggers; one to close the layer, and the other that makes next year icon visible. After learner views last layer, "I'm done" button closes layer and makes Congratulations material visible. I'd probably make that a layer, too, as it only takes one trigger to make it visible.

If you want to allow random access, then you need to provide a method to keep track of which layers have been seen. I'd do that by using a T/F variable for each layer. When the learner clicks the "I'm done" button, which has three triggers; one to set the variable for that layer to true, one to hide the layer, and a third to show the Congratulations material, on condition that each of the other variables is True (each of the other layers have been seen).

Some random observations: If the main menu is going to allow access to both the year and the year+, then each one needs its own variable. If the two parts of the year are not stand-alone segments, then the second part should not have an icon on the menu page, and the first page should have a "Continue" button which leads to the second part, which sets the variable.

The main reason you can't get anything to work is this trigger (and the others like it).

Maybe in the real version things are different, but these triggers aren't needed: 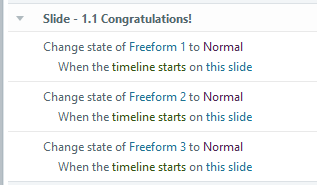 The items can be set to have an initial state of Normal, and when the slide starts they will be in Normal state.

These triggers are unnecessary:

Layer 2007 can have its properties set to "Hide other layers when shown". In fact, that is the default setting when a new layer is created. So unless you changed that, showing layer 2007 will hide the current layer.

Thank you so much for the feedback and help with this!

I tried the variable on the layers but it didn't work. I'll try again. :)

For the Freeform triggers. I tried everything to get the object to hide. I wish I could hide the group as a group. I'll try taking off the "Normal". I set the initial state of those as hidden and then back to normal using those triggers. When I kept the initial state as Normal I had to hide it on every layer versus, the trigger for normal on only a few. I'm sure there is an easier way to do this than the way I did. I started to go ahead and just turn it all into individual slides but that would mean recreating everything since the layers don't translate to slides, or I couldn't figure out a way to do it. Individual pages would have been so much easier.

On the "Hide Layers", I didn't change it and I didn't know I could set it like that so that's a timesaver and helps keep it "clean". :)  I fought with the layers overlapping.

I was trying to keep options open and not restricted but with a timeline only being able to go one year at a time makes sense.  :)

Thank you again for your support!  :)

Groups don't play nicely with states and triggers. I think the easiest way is to take the freeforms and make them a single graphic, then they will behave. One way to do that is to select them all, right click and Export shape as graphic. Another is to build them in a graphics application, many of which have those shapes available.  keep us informed about the layer triggers.

Duh, Rhonda! Why didn't I think to save it like that. I'll definitely let you know how it turns out. :) Thank you sooo much for the help! :)

You're Welcome. Pass it along when you can. (PIAWYC)

Okay, when I tried saving the freeform as a picture it added a light-colored background to it.  I tried multiple ways but got the same result. I had to just screenshot it and save it. Not sure why it didn't work the other way. I've attached what it looks like on the page compared to the original.

Or you can load it in a graphics program and give it a transparent background.