I'm trying to limit a user's exam attempts to 2 before they have to get remediation from the course subject matter expert.

I've created a new variable labeled "ExamAttempts" , the type is "Number" and the default value is set at 1.

On the results slide, I've put the following trigger on the retry button:

My logic is that when they initially complete the course and go to the exam and fail it (the first time), they will hit this retry button and it'll log that they're now on their 2nd try. After their second attempt, if they fail I want Storyline to be able to tell them they've reached the max amount of attempts before they must seek the course SME for remediation.

When publishing the course into Articulate Review, I'm able to take the exam myself after 3 or 4 failed attempts.

Any ideas on what I'm doing wrong?

Did you add a trigger on the Retry button like this :

Change state of On Object Retry Button To State Hidden when Timeline Starts On condition ExamAttempts == Equal to 2.00

This feature is not working in the latest version of Storyline 360. I have attached a sample course to this reply that is configured correctly, but not disabling the "Retry Quiz" button correctly. 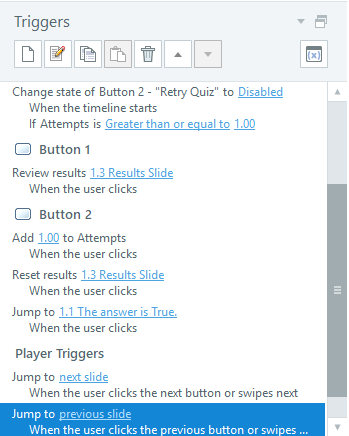 That did the trick. Thank you!