I have a slide that has four buttons.  Two buttons are green and two are purple, and clicking on each button brings up a layer with a corresponding color.  I created Selected states for each button that are identical to their normal state so that I could create a trigger to display the next button after all of the buttons had been clicked/layers had been viewed.  (Not sure if that was the most efficient solution, but it worked.)

Now my client has requested that the buttons gray out when the student clicks on the subsequent button (after they've viewed the current layer).  I've created the visited states as grayed out buttons, but how do I tell it to not go to the gray button until the next button has been clicked?  Right now it's showing the visited state as soon as the current button is selected.

Here is my suggestion on your question

Looks like Mr C has got you all sorted. If you need any additional help, don't hesitate to reach out here!

Thank you.  But I don't want the student to have to close the layer; they should just be able to click on the next button in the list and have the previous button gray out.  Is there a way to do that?

Absolutely! You'll want to open the Slide Layer Properties for each layer, and uncheck Prevent the user from clicking on the base layer. 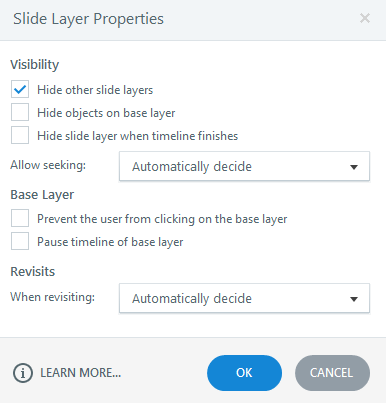 Hope this one helps