So I've built a course (see attached) with some slides where the following is supposed to happen:

1. Learner clicks the phone images on page 'Processes Intro', which then takes them to the relevant section and also changes the state of the image to 'after click' (custom state) which makes it appear greyed out so they know they've clicked it. (This applies to 3 images on the page titled '1. customer journey button', '2. fulfillment button' and '3. Additional info button')

3. Trigger on arrow 'NPA 1' on the Process Intro slide should mean that once all three phone images have been clicked and entered the 'after click' state, the NPA 1 image should appear so the learner can click it to go to the next chapter.

I have set slides up like this in another course before and they worked perfectly, and I have compared the two setups but cannot see the difference as to why its not working in the new course.

Can someone please take a look at the attached slides to see if you can figure out why it isn't working? I can provide more clarification if needed!

Try to change the order sequence of the change state action. Please refer the attached screenshot for reference.

Just one suggestion, if possible reduce the page transition duration from "1.00" sec to "0.25".

Thank you for looking at this for me! I can see what you mean from the screenshot, however I don't understand why this will make it work. I will make the changes and see if it does, but could you please explain why this will work so that I can apply the same thought in future to the trigger order?

Storyline lets you apply multiple triggers to the same object. Trigger order than is very important, and here are the rules regarding the order in which all these triggers get executed when learners view your published course:

To learn more about adding and managing triggers, see this tutorial!

So having the trigger to change the state of the object before the jump to slide trigger allows the first trigger to execute prior to changing slides.

Glad that Amey was able to pop in and assist you here. 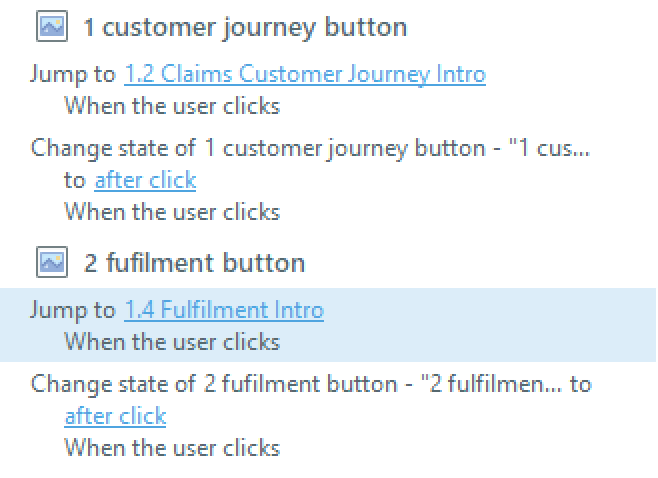 The way your file was originally set-up, you were jumping to another slide before the state change trigger, which means it would not happen because you were no longer on the slide.

I hope that helps :)