How do I have several icons show a layer then move along a motion path one at a time with just one click?

I'm hoping for some help with a rather complicated (at least for me) triage activity I am building. I have 4 victims with minor injuries. I want each one to, one at a time, show their status and then move along a motion path to a specified location on the screen.

1. Learner clicks on the rescuer icon to call out to the minor victims to come to the sound of his/her voice.

2. Each victim with the minor injuries then one at a time shows their status and moves along the motion path to the designated area on the screen.

3. The rescuer then "walks to" and clicks on the other more seriously injured victims to determine their status and tag them correctly.

I have a status layer for each victim, their triage tags, motion paths, etc. I just need to know how to move the minor victims as described above.

I have attached the working file for review if needed.

In the revised version of your file, I have made a number of changes to the triggers. The movement of the first victim is triggered as before, when the user clicks on the feet icon. Thereafter, the various movements are all controlled in the same manner, so each set of triggers is roughly the same for each of the four moving victims: 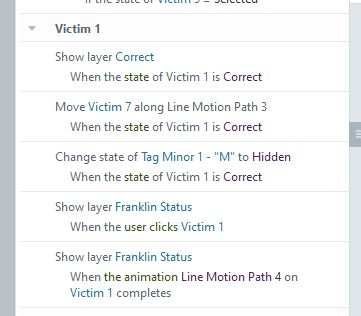 In each case, the movement of the next victim is triggered by the current victim's change of state to Correct. This way the next victim won't move until the user has clicked on the Minor tag (If you are dealing with a lot of different motion paths on one slide, it can often be useful to use the completion of motion on one to trigger the next motion path to activate).

I have also added two triggers to each of the moving victims' layers to hide the layer at the end of the timeline (this keeps it visible for 5 seconds, but you can always change the length of the timeline if you need a different time) and to change the state of the victim to Selected. This second trigger now ensure that there is no need to physically select the victim in order to then allocate a tag as they are now automatically considered to be selected once their layer has been shown:

I made one minor change to the slide itself by moving the number 9 to the left of the character as it was visible on top of the rescuer's text box.

As far as I can see, the first part of the slide (i.e. the movement of the four initial victims) now works the way you want it to, but if you have any further questions, just get back to me.

By the way, I like the concept and it was a fun challenge to solve it.

Thank you so much! This works like a charm. Thank you for taking the time to figure this out.

No problem Dianne, I'm glad it works. If you have any other problems, just shout out.