How to delay Try Again layer

Is there a  way to delay the Try Mode layer from being triggered when the user clicks outside the hot spot until after a specific time on the timeline?

I've gotten this to work by creating a true/false variable and a corresponding trigger that changes the variable when the timeline reaches a cue point.  The Show layer Try Again trigger was modified to: 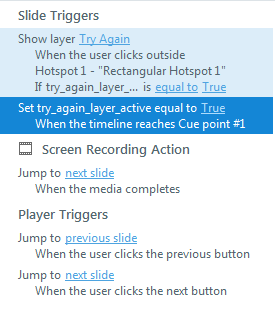 Can this done in Storyline without using variables?

I would let the built-in programming of the submit interaction do its thing, but cover the try again button (or panel, depending on your situation and taste) until the extra information is finished. Then disappear the cover, either through a timeline, or user action and let them try again.

Whether the try again text box and button are covered or not, it doesn't change the fact that the try again layer is on top of the the layer that has the information or graphics or animations we want the learners to complete before clicking on the hotspot for that try mode slide.  Being that the try mode layer is on top of that layer, the try again text box and anything that covers it up (as you suggested) hides a big portion of that layer which has what we want the user to see.

If you want to do more than just very simple activities, SL needs to be able to remember what is going on, and using variables is the only memory it has. (some people try to substitute object states for variables, but it is more complicated, less reliable, and more limiting to do so.)

Here is a sample story that show the user review material before they retry the quiz.

Appreciate your efforts, Walt, but I referring to try mode slides, not quiz slides. Plus, your way uses 3 triggers; mine uses one.  Why would I want to have to create 3 triggers per slide, when I can do it with one trigger?

In Captivate, the hotspot for try-mode slides is included on the timeline, so to delay the caption and hotspot until after the information is presented only requires repositioning on the timeline.  Now that we just got Storyline, I need to find a simple way to do the same.

No worries, Walt.  Your good intentions are appreciated.