How to display text when multiple variables are chosen

I have 30 variables (buttons on a slide) that represent 30 attributes. If the user clicks on an attribute, I've set a trigger to change that variable's state to true. The user is allowed to click on as many attributes as they want right now, but ultimately I'd like to limit them to just 10 so I also have a number variable that is keeping track of how many they have chosen.  My question is: Once the user has clicked on as many attributes as they want and click Submit, I'd like a slide (or layer?) to display all the attributes the user has clicked on (all variables that are now equal to true). Basically, the logic is: if variable is true, then display this text box (the text box containing the attribute name, such as "analytical" or "confident", as opposed to showing %variable% which displays either "true" or "false"). I hope that makes sense.

Appreciate any help. Thanks.

Hi Kristin - without seeing a screenshot of what you have in mind, I'm not sure if I'm picturing your situation correctly... but I'm just wondering: do you need to use a separate slide or layer to indicate which items the learner has selected? It seems like it would be easier to just add a Selected state to each button, and make that selected state look visually different. That way learners can easily see which items they've selected, and they wouldn't need to see a separate slide or layer for that info.

But it's highly possible that I've misinterpreted what you have in mind.

If that's the case, want to attach a screenshot or mockup of the slide you're wanting to build? 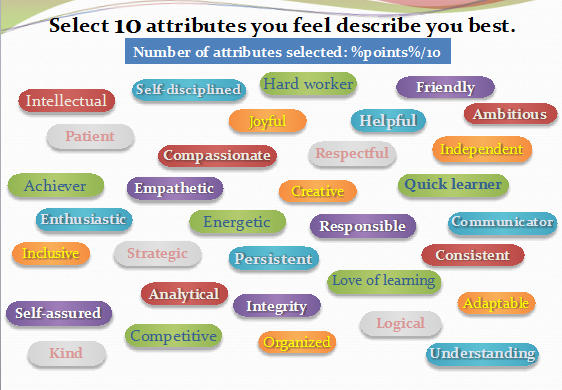 and the confirm slide screenshot: 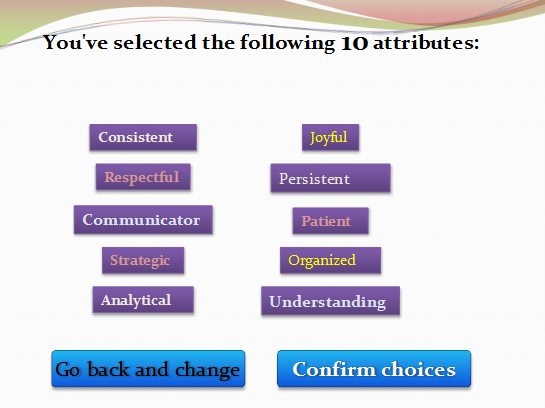 Did you get the rest of my message? I can re-post it here if you need me to.

Hi again Kristin! Here's how I would go about that, and at the bottom of this message is the story file so that you can deconstruct if you want. Hope this helps!

Fantastic! I just watched your tutorial and will go try this out. THANK YOU very much for your help! You make it look so easy!

Thank you again. I set up all 33 attributes as you described, and it works perfectly. Now, I have another question!

Of the attributes someone chooses, is there a way to allow them to put them in ranking order? Or assign a value and number them from 1 to 10 (or if they chose fewer than 10 from 1 to ?).  And finally, I would like them to be able to print them in order.

You could then set them up as a drag and drop, and set a javascript trigger to print the window

Thanks Phil. That sounds great. I am a novice so, could you please explain to me how to access the attributes that have been selected on one slide to be available in the drag and drop slide? Also, I don't know how to set up a javascript trigger. Thanks so much!

I like Phil's drag-and-drop idea! Here's one way you could do it:

...and keep in mind you've got a lot going on in this interaction, so the triggers are, shall we say, multitudinous! But I think this will give you the behavior you want. File's attached at the end of this message.

Wow. I am learning so much from you! Thank you Jeanette for taking the time and putting this together for me. It is a huge help!!

Jeanette, wondering if you are still subscribed to this post. Your suggestions for Kristen really helped me with a similar project. I wonder if you can help me with the following:

My story file has 56 values and learners need to select 5 that they relate most to. Because there are so many values, hiding the ones that they didn't select (once they click on Submit) will make the ones that they selected to be placed weirdly on the screen. I wonder if there is a way for the selected values to automatically appear in the spots I created (see layer "Summary" in the file attached.) Also, I want learners to be able to rank their values (so drag and drop to the right spot).

Thank you very much in advance.

Sorry for the delay in responding... I spent a little time yesterday looking at your file and experimenting with the approach you described (making only the selected values appear on the Summary layer in the rectangles )... however, with 56 different values I think this would mean a crazy amount of triggers to make it all work the way you want.

Maybe we could brainstorm some alternative ways of handling the interaction though... can you say a little more about the end goal of your interaction? Will this be something that is scored? What do you want to have happen once the learner arranges their selected values in rank order?

Thank you for replying! I know, it's crazy, 56 values. The activity is part of a large course on leadership values. Learners are encouraged to think through those values and see which are the ones they relate most to. In the end, they need to rank them and print out on paper. There is going to be a follow-up seminar where learners bring their printed out papers and discuss their values as a group.

You could concatenate them using JavaScript. Could even save them in a pdf

are the 56 values broken down into specific categories?

What if you did this: Once the learner selects their 5 values, you could display a layer in which all rectangles appear dimmed (and disabled) except the 5 the learner selected. The blue area at the left side of the slide (where the instructions appeared, on the base layer) could change to show five dotted-line drop targets. The learner could then arrange their selected items in those drop targets, in rank order. Would that work?

Thanks Jeanette. After 2 nights of trying to use a javascript code and various other options, I decided to re-think and simplify the activity. Another lessons learned :)