How to find correct result variable

I do not display the result points or % on my results slides.  (I intentionally deleted the text box that was automatically created when I inserted the results slide.)

I do use the results variables in conditions, and now cannot remember which result variable number (e.g. %Results1.PassPercent% or %Results10.PassPercent%) belongs to which slide.

How can I see what results variable 'belongs' to a specific results slide?

Hello Bennie! You can manage your variables and see all of their uses here: 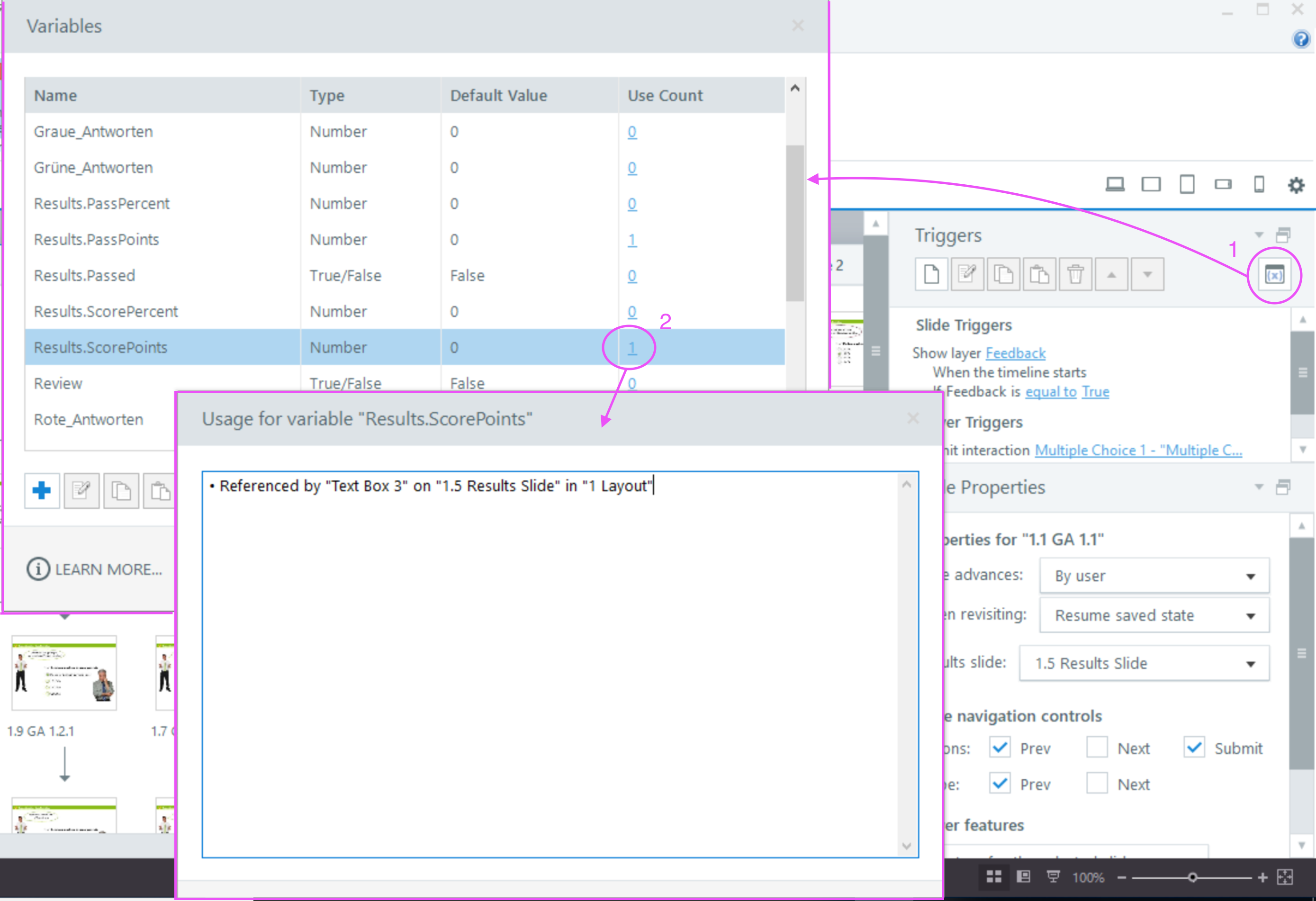 Let me know if you need more help!

Thank you Crystal, that does not solve the issue.

Let me see if I can perhaps explain it more clearly.

1.  I created numerous graded questions and result slides.  For each of these, SL360 created incremental variables,

Instead of displaying the points/percentages that are calculated in the ScorePercent etc. variables,  I use trigger logic to display different layers of the slide (PASS or FAIL)

In order to define the triggers I need to know which # variable 'belongs' to the specific results slide, i.e. is it Results5.ScorePercent or Results6.ScorePercent or ???

When I view the variable 'usage' as you suggested (screen shot in your reply) , it does not show any use of the specific # variable, which is correct as it's not used anywhere (the only place it was used was in the text box on the results slide and I've deleted the text box.)

Since it's not used it's not shown, and I cannot figure out which # variable to use in my trigger logic.

It certainly would be a lot easier to explain this on the phone!

even if you've removed the text boxes on slide, the triggers should still be in the panel (unless you've deleted those) - double click the trigger and see the trigger panel conditions area to see which variables are referenced.

There is no trigger to double click; I have to DEFINE it, and therefore need to know which Resultsxxx variable to use.

Can you share the story file and I’ll take a look for you.

As long as you reference each result slide with ‘a set of result’ variables it should work.

eg the first result slide use results.xx in the text box and then create the triggers referencing those same variables.

next result slide use results1.xx

Attached a trimmed version of our story file.

Show layer 'Competent'
When the timeline starts
If Resultsxxx(??)ScorePercent = 100

How do I determine which Resultsxxx variable to use?

On slide 1.3 you use two 'results' variables,

Which is the correct one to use, and how did you know it's that one?

my mistake - on the edit result slide I changed the pass mark to 100% from 80% - when I did that SL automatically put in the two triggers to show the correct and incorrect layers.  In doing so, it added the variable results1.xx  and I should have used results1 and not results7 in the trigger.

If you ever need to work out what variables are being referenced you can add a text box with the references eg: when a user answers correctly and score a point - the variable will change so you will know which variable is being referenced

See attached update to your file.  Here is a peek video showing it working.

Thanks Wendy, I much appreciate your patience and quick response.

It does seem like a convoluted way to go about it (changing the passmark and then changing it back).

Perhaps this could be an enhancement request?

changing the passmark and then changing it back

However, as I understood your video, it is by changing the passmark (as you did, from 100 to 80) , that SL automatically adds the triggers, where I can then see the appropriate resultxxx .

Did I miss something?

I can't say that is why it worked - but I was looking at why the layers weren't displaying correctly.  I have a process of checking things when my results don't display correctly.

and so on...it was a process of elimination for me.

You can add the results variables back to the slide from the results toolbar. In the future you may find it easier to drag them off the slide rather than deleting them.

With 17 results variables that's not really workable for me.  Phil's suggestion below is a dream .

Thank you Phil that works a dream!

Much much appreciated, and best wishes.
Bennie