How to reset this interaction when revisiting the slide

I'm building an interaction where the user is supposed to drag a person to a drop zone (the circle on the left) to get more information about the person. (a-initial.png)

When the person is dropped, a layer with information will appear. (b-submit) When the user clicks the X this layer hides and the user will come back to the initial slide (interaction).

Is there anyone who have an idea how to make this happend?

It's an drag and drop interaction.

Try setting the slide and layer properties to 'Reset to initial state'.

I've already tried it, but it doesn't work :(

In addition to setting the slide properties to 'Reset to initial state', you will also need this trigger on every layer: 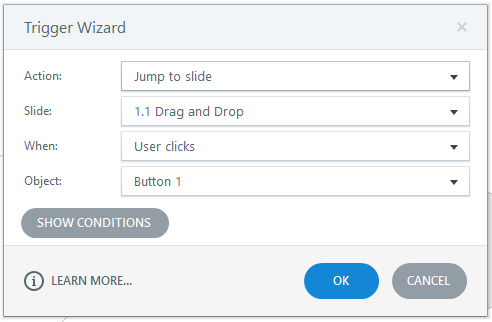 Currently the X button hides each layer, but you should also have it restart the timeline on the slide. That way, it will reset to it's original state each time a layer is closed.

Give it a try, and let us know if it works!

Michael, I am not sure if this is what you are looking for, but I threw this together for you to take a look.  I just used three layers, created a drag and drop and each time the "X" is clicked, the Course restarts.  It may not work if there will be mulitple slides in the course.  I know I did this once before and had it reset just the one slide, but I cannot locate my notes to tell me how I did this the last time.  Anyway, I hope this might aid you.

Thank you! That helped me and solved my problem. I'm sooo greatful for your help!

Thank you for your solution, but as you mention it resets the whole course so it doesn't work for me. Alyssa's solution helped me out.

Wonderful! Glad we could work together to find a solution!