Hi, I am testing importing similarly spec'd videos, both m4v and flv with the same frame rate, resolution, etc.

However, when I import a m4v file of the same specs, I basically get about the same size mp4 in the output (about 6.5MB) but I get no FLV at all?

Having seen that, my instinct is to just use M4V for import because I don't want our users having to stream a 40 MB FLV file when taking our training, but I guess I don't understand how that is exactly working.

I feel like this is a no-brainer to not import FLV's but instead just import m4v files, but I am afraid I am totally missing something here.

Hi, Eric -- Please take a look at the following information regarding How Videos Are Encoded in Articulate Storyline. Hope this helps, and if not, please let me know!

Here's how Articulate Storyline encodes videos in your courses, based on their original file format and the output options you choose when publishing:

Hello - when using PRESENTER 360 to import MP4  (powerpoint, articulate, video, "add slide video from file"), I sometimes get the option (shown below) to "Do not compress video at publish."  I want this option every time.  Is this option dependent on how the MP4 was converted from AVI?  What should the settings be?  720x480?  Please tell me what your articulate programmers have set to trigger this option check box.  thank you! 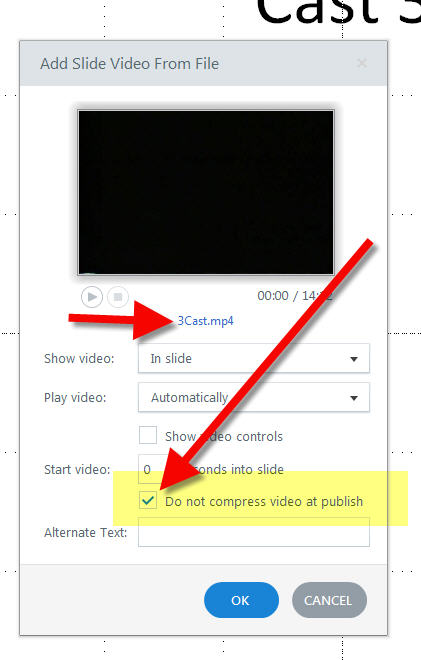 Thanks for reaching out. I can see my colleague Crystal recently responded to the new discussion you posted right over here. We can keep the conversation going there, if you'd like!