I am looking to streamline my work in the next module, where the idea is to include reading from a manual at the start of the training (yes - highly effective use of online learning capabilities). There are a number of pages in pdf form and previously I have turned them into a web object and inserted them but it would be easier to insert the .pdf file itself into a scrolling panel. The idea being that I would be able to put both the pdf and a button at the end of the pdf (that the person would click to ackonwledge they had read the document)  into the scroll box together.

Does anyone know how to insert a pdf document? I figured it could be inserted as a picture somehow?

Are you simply looking to launch the PDF from storyline in HTML5 and then track an acknowledgement?

See my previous post.  Launch it and track it  and make it available for review anytime a field rep needs to look at it.

You're still missing it Phil, but thanks for your thoughts.

You could access it from the resources using a button, this would at least show they launched, you could then set a condition on the checkbox to ensure its has been launched (visited) before allowing it to be checked.

Best I can come up with unless you use a PD.  server to ensure it has been loaded

2. Add a button on this slide and trigger it to launch the PDF (Launch URL/File trigger)

3. The True False (Yes/No) question is an acknowledgement question.

4. User launches the PDF in a new window.

Thank you for the Screenr.  That's the closest anything has come to being able to present my idea. I will experiment with that.  My remaining question would be: Can we set up the acknowledgement as "complete / incomplete"for reporting purposes by the LMS?  I'll experiment with this but it's important that we be able to report completion of the document.

This file will ensure the user downloads the pdf (or at least starts the download), it will also ensure they confirm they have read and understand the pdf, and will report this to an LMS

You could use a combination of davids solution with this

You would need to set the reporting to the results slide, you could name the question as PDF read and understood, which would look better on the interaction reporting

I thought I'd throw my 2 cents worth in and explain how I have evolved what I am doing since my initial post on this.

Firstly I would like to point out that the pdf's I link into courses are simply for 'pre-course reading' and tend to be documents that relate to company policies on the information/learning that the staff member is about to cover. I do not consider it part of the training module but rather a way to highlight to the staff member that there are legal/policy documents and obligations related to the content that they should be aware of.

As such my button states 'I have read and understood the listed documents'. This button is related to a trigger that prevents them from carying on with their training until they have pressed it.

When these documents are in the form of a pdf I have them open automatically when they get to the 'readings' slide with instruction of how to get to the relevant section on the slide. I do try to avoid this for a few reasons as I don't like parts of training opening up in different windows, I can't make it open to the relevant section and there can be issues with pop-up blockers and security settings.

I have pushed for as many policy documents and manuals to be placed on our intranet as I can as these can be opened as web objects and avoid the problems I just mentioned with the added bonus that if the document is changed it is much easier to update the version on the intranet then go through and modify all the training modules that link to the document (a particular problem with the naming conventions we use). These intranet links themselves don't have to be able to be navigated to on the intranet, there just has to be a web address.

Using webobjects this way also gets over security issues with sensitive documents as they can only be opened if the person has access to the intranet and the document itself can't be reproduced in it's entirety out of the training (unless you want to take a lot of screen shots).

I don't use the resources section very often, alhough it can be very handy I would find it more useful if you could link to slides through it as though it was a second menu. then I would be able to use web objects through it as well.

I guess the theme here is that I've moved away from attaching a pdf and just use webobjects. Also I don't use them to convey training information but rather to present related policy and legal documents.

I apologise for the massive block of text in the above post but for some reason my spaes between lines won't show up.

You could access it from the resources using a button, this would at least show they launched, you could then set a condition on the checkbox to ensure its has been launched (visited) before allowing it to be checked.

Best I can come up with unless you use a PD.  server to ensure it has been loaded

I  have not yet looked at conditions, how would you create a condition for the check box to show once the resource has been launched?

Many thanks in advance.

I had a similar problem.

I fixed converting the doc or pdf to swf (there are serveral converters online and for dowloading) I used this: http://document.online-convert.com/convert-to-flash and was very fast. And worked great!

Attached I show you waht I did

This is a good option, Thanks Xacobe.

I did notice though when I previewed it that the swf size appeared smaller than what it appeared on it's layer. Does this usually happen or is it a quirk with preview?

I have used the approach that David Anderson posted about exporting the .pdf to an rtf and then inserting into the scroll panel. This has worked but is time consuming as the .pdfs are updated quite regularly for legal reasons. It would definitely be alot easier to just insert a pdf into the scrolling panel. Posting externally is not an option do to firewall and compliancy issues. I also do not want to get into the conversation of what is good e-learning design as I am sure we have many different opinions.  With that in mind, Storyline is not just a tool for e-learning but corporate policy compliance and many other situations. I do agree that there seems to be a significant need for adding pdfs to the scrolling panel. Just my two cents.

You make a good point that Storyline can be used for so much more than eLearning.

On that note, some have approached SL as a web tool.  So let's say you did the same and you viewed your PDFs as web objects embedded in your course.  You could save a lot of time with this approach.  I listed the steps here a few months ago:

This way, you could just keep your PDFs in a folder and update them when needed and republish.

I had the same issue.   I wanted to have a PDF document that the user could acknowledge that they reviewed/read it

What I did was:

1.  Created a True/False question but modified it to read as  differently.  Made True say Acknowledge and False I don't Acknowledge.  True = Acknowledgement………….and false = no acknowlegdement.  Then published as SCORM, now the LMS will report Acknowledgements as a PASS and the latter as a FAIL.

2. Inserted web object to display PDF that is on a "hidden" webpage.

I can see this setup being a HUGE benefit for many departments (especially HR) where there are a lot of PDFs that require reviewing and then acknowledging.  Much better this way because it is all packaged neatly and will generate easily into LMS reporting. 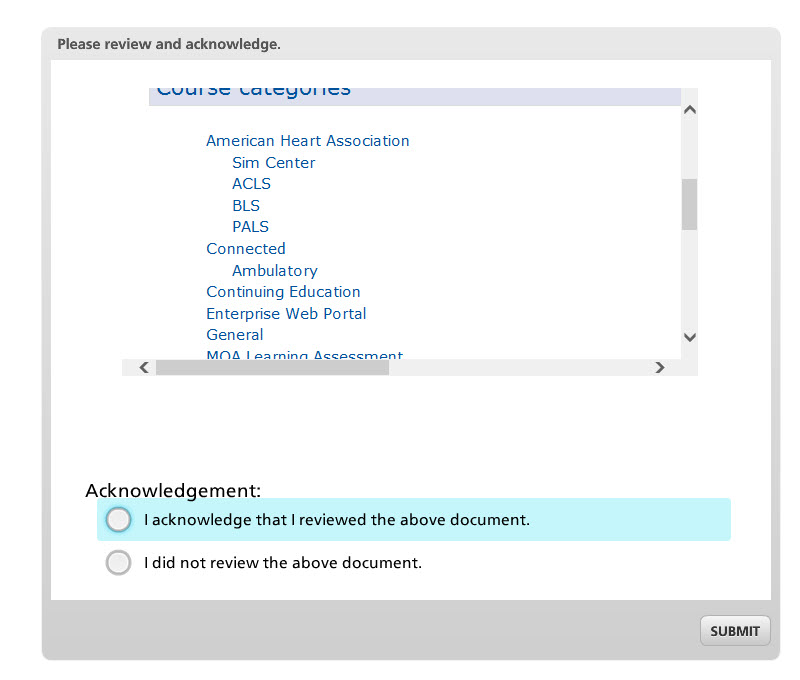 Thanks for sharing Timothy

I had a similar problem.

I fixed converting the doc or pdf to swf (there are serveral converters online and for dowloading) I used this: http://document.online-convert.com/convert-to-flash and was very fast. And worked great!

Attached I show you waht I did

That's great solution, and also as pdf to flash converter does.

Any suggestion in how to purchase Zamar to convert PDF file to  PNG? Is there any other software that will convert a PDF file (2 to 10 pages) to one PNG image?

Any suggestion in how to purchase Zamar to convert PDF file to  PNG? Is there any other software that will convert a PDF file (2 to 10 pages) to one PNG image?

Adobe Acrobat Pro X lets you save pdf pages as bitmaps too.