I have built a course where clicking a button will play a click sound and then go to the relevant slide/layer. This was working fine before the update on December 17 where the following was fixed.

The same media file used on multiple slides was duplicated in the published output.

The sound has been named differently in the slides(see image below) yet the trigger doesn't seem to be working correctly. 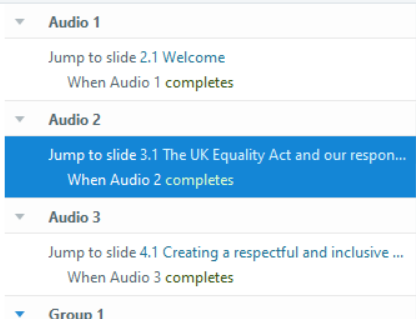 Clicking on any of the buttons always goes to slide 2.1 Welcome.

Has anyone else been experiencing similar issues? Please let me know if have any questions.

Yes.  I experienced the same issue with a common click audio element being incorrectly applied and causing triggers to incorrectly activate on the latest update of SL360.

I regressed my SL360 back to Sept 2019 to publish my courses and the problem goes away.

I plan to test again on the next release/fix to see if this issue has been resolved.

Thank you for your input Jerry. I have also gone back to an earlier version as there seems to be no other way around it.

Thanks for reaching out and confirming. I'm sorry that you ran into issues with the when audio completes trigger. We have reported it to our team, and continue to keep an eye on it to evaluate how many customers are impacted and what impact it has on courses.
I'm really sorry that I can't say when this issue will be fixed, but you're in the right place to stay updated on this bug's progress.

We just released another update for Storyline 360. In Update 50, we’ve included important fixes and new features.

One of the fixes we’ve included is:

To take advantage of this update, launch the Articulate 360 desktop app on your computer and click the Update button next to Storyline 360. You'll find our step-by-step instructions here.

Please let us know if you have any questions by posting here or by reaching out to our Support Engineers directly.

Can you confirm, the issues I have had with triggers linked to media completions were not limited to previews, they were deep and occurred in published projects.

The most deeply problematic one, and it still existed up to yesterday's version, was triggers to jump to next slide, prev slide or layers that were sound triggered so a "click" sound had time to complete (.25s), SL seems to remember what that audio clip was used for originally and keeps applying that over and over.

For instance, one on slide I would drop a "click" audio element, then name it ClickNext on the slide, connect my NEXT button to that audio, then tell that audio to jump to the next slide when the audio completes.  Fine.

Then I would duplicate that audio clip, change the name to ClipPrev, then connect the PREV button to that sound, and set that clip to jump to previous slide when completed.  Up til Sept 2019 that worked gloriously.

But it stopped working after that.  It seems that SL was somehow detecting that the audio clip was a copy of a previously used media, and reapplied the prior trigger.  So when I clicked PREV, it played the ClickPrev audio, but then applied the trigger from the first instance of when I used one of those clips.

I had used the same audio clip, renamed ad nauseum as needed all through dozens of courses, it worked just fine until after Sept 2019, then it broke completely.  I had to start redoing all the progress elements in my projects.

So what exactly got fixed?  Did any of that above?

To test this fully -

In the past, for me, they didn't, it would do whatever was programmed into the first instance of that audio clip.

Great question! Originally this bug was logged just for the behavior in Preview. Similar to your statement, we found that releasing a fix in Storyline 360 (Build 3.49.24347.0) caused a regression that affected the web output. Our team released the fix so that triggers set to occur when media completes work when previewing a project and in the published output.

Please don't hesitate to reach out to our Support Engineers in a support case if you still see this bug!

The bug I outlined in post #5 above still appears to be a bug.  Duplicate copies of the same audio clip does not seem to be usable to do different things.

In the attached file I placed copies of the same audio clip in the Slide master as well as more copies on the slides themselves to do different things, it doesn't matter what I click, the only thing that happens is the slides advance.

Thank you for those details, Jerry! I see that my teammate, Lianne, is working with you in a case. We'll continue working in your support case to have all of the information in one spot.

I am still experiencing this same issue as Jerry. I cannot re-use the same clip even if I rename it to something else in my folders it still gets added to the course under the same name. Is there any work around or fix to this so I can have a click sound on my buttons but have them carry out different actions.

Only in my latest test, I was able to utilize the same audio clip with multiple copies pasted into the same slide and each being used for various clickable events and after-triggers.  The fact that the base sound has the same name is not an issue, as long I am dropping in multiple copies, I can now give them their own triggers and they seem to work correctly.

Jerry, thanks for your input. I will try what you have done and see if that works for me.