Issue with objects appearing contingent on other objects

So I am trying to create a game inside of Articulate Storyline and am testing to see if the idea I have can come to life in Storyline 360. So the object of the game is to drag the icons on the left to the icon on the right that matches the definition. If the user successfully matches the correct icon with the correct definition then that icon goes away and a new definition will pop up. The user will continue this until all 8 icons are gone and then a new set of 8 icons will appear. The problem is I want a red "X" to appear if they drag the wrong icon to the drop box icon. Basically the user has three strikes and then the game will restart and they will have to start over. I need help trying to figure out how to have one red ''X" appear and stay appeared for the rest of the course. And then another "X" to appear when the first red "X" has already appeared. The problem I can't get around is if the user gets an icon right and it disappears but gets the second icon wrong and the red "X" appears on another slide or layer, then it seems impossible for it to know that it got the first icon right and should still be invisible when the red "X" appears. For what I have so far, the "Message" icon is the right answer and a green check mark will appear. I have the "Document" icon triggered to be a wrong answer and a red "X" to appear but I cant figure out how to trigger another red "X" after the first one and to remember which icons have successfully been answered and are removed from the screen. This is a complicated problem but I feel like there is some solution around it. I have attached my project so far.

The community would be much more equipped to help you with your design here, but I did take a quick look.

You may not need to use layers, but variables could work better. Take a look at Slide 2.1 and see if this is getting you closer to what you are needing for your course.

Thank you Leslie for your help so far! That definitely helps solve my variable problem. Do you know if there is a way to create a variable that continues throughout the course? Because when the user selects the right answer and it goes to a new slide, the red X's reset. Also why do the icons snap to the hotspot when you incorrectly drag an icon over the hotspot? Again thanks for your help so far. I have attached an updated version to incorporate what you had showed me and the next slide. Also I'm not sure where to upload this for the Community to view.

The variables will carry over through the course, which is why, for example:

So, a different variable per slide may work better for your scenario.

Also - you are sharing with the community when posting in the forums :)

I could be misunderstanding you but I need it to be set-up to where the red X's carry over on every slide and not to reset each time the user advances to the next slide. For example: If on Slide 1.2, the user drags two wrong icons over to the hotspot and two red X's appear like its suppose to. But then the user get the correct answer and advances to the next question which is where Slide 1.3 begins. But now when slide 1.3 appears the red X's have disappeared and I need it to where those two red X's carry over to slide 1.3. Does that make sense? Maybe you already answered my question and I'm just misunderstanding you. Also, I don't understand why the wrong objects are snapping to the drag icon I made. I need them to snap back into there original place when the user get the question wrong. Currently they stay in the drop icon and don't move. Sorry for asking you such difficult questions but you have already helped me out tremendously :)

Nope, you did not misunderstand. I misunderstood what you needed. Let me take another look and see if I can further assist :)

So, I took another look at your file and the Red X's can be easily corrected.

On subsequent slides you need to have additional triggers to check the variable on timeline start: 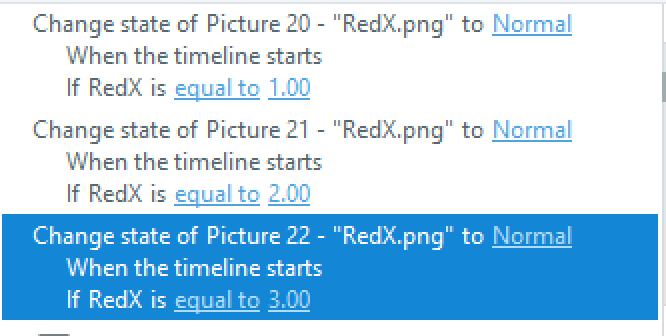 Your updated file is attached.

As far as your image question and snapping back. Did you consider using the built-in free form drag and drop? That has a snap back feature built in.

Hopefully someone in the community will be able to help you out with that design.

Thanks Leslie! This helps me out so much! I will definitely post to community next time I have an issue. Again, thanks for all your help!

Glad to be able to help you out :)