Issue with Orient Shape to Path on SL 360 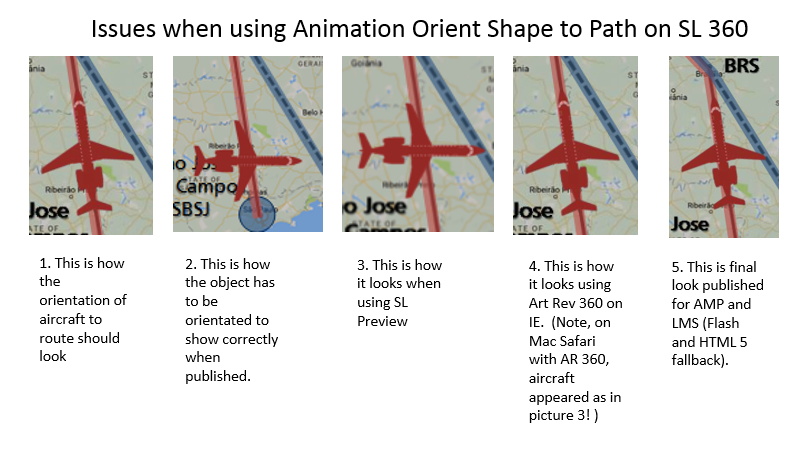 This is a head scratcher.  First off this is a great and necessary feature for those of us teaching aviation stuff!   The scenario is a red aircraft object flying up a red path line.  The path goes straight for a bit then makes a slight jog to the left.  See #1 on attach.  If I orient the object correctly in the source file, the finished product has the aircraft 90 degrees rotated to the left.   So to have the object orient properly, the aircraft object has to be set at 90 degrees to the right (see #2).  Here is where it gets interesting. SL Preview shows (see #3) aircraft going up path sideways (as in the source file).  Articulate Review 360 shows aircraft going up path oriented correctly!  And published LMS file shows orientation correctly on AMP (iPad) and Flash (IE).  (Published with AMP and Flash with HTML 5 fallback.)

Has anyone else run into something like this?  Thanks.

We've got an issue on our radar for Storyline 360 where objects are rotating 90 degrees on a motion path if the object is set to "orient shape to path" . From the screenshots you included, it looks like that matches what you're seeing.

I'll definitely add your experience to the report, and I'll keep you updated on any new information. Thanks for letting us know what's going on, and I'm sorry if this has been giving you headaches!

Has this been resolved? I have the same problem

This issue is still open with our team. If you have another example to share that would be really helpful in our testing and investigations.

You can upload here using the Add Attachment button or send along to our Support Team. We'll also keep you posted once we have any other updates or info to share!