Issues with Jump To Trigger; changing .wav files to "recorded"

Hope this makes sense.  I have a large body of work that we've been developing over the last 8 months while our LMS was selected, stood up, etc.  In the last few weeks we've been able to test on the LMS and have uncovered some glitches.

One of them is that a button that I call a 'refresh' button doesn't work predictably that is part of the interface - it's on each slide, not a master slide thing.  It is just a button with a Jump To action on it, reset for each slide.  Easy enough.  But in testing on the LMS, we found that it didn't reliably work if there was more than 1 piece of audio  / video on the slide (which many of ours have) AND/OR if the person had browsed to another layer, with or without audio. It goes to the last piece of audio or video played...not the beginning of the slide.  So that is the first question:  How can I jump back to literally 0 on the timeline using a trigger?

The second issue is that in trying to solve this, I began combining triggers on the same button.  I left the Jump To, but I also added a play media on click trigger to the same button.  When I do that and that media is a .wav file, it alters it into a "recording" which then doesn't play.  __at all__.  I remove the trigger, and I get the sound back.  It's so bizarre.  So I am left with my original issue...how do I get things to start at timeline 0, but the larger issue too of what the heck is this recording thing?  Surely it's a bug, yes? 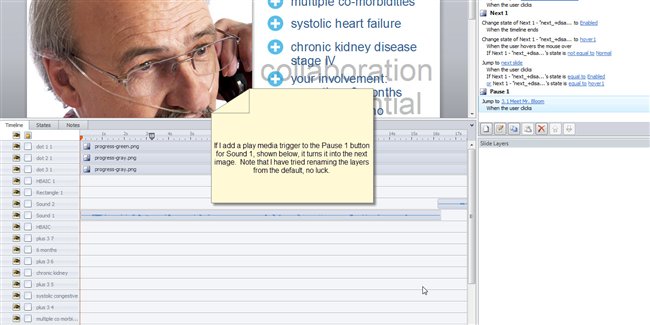 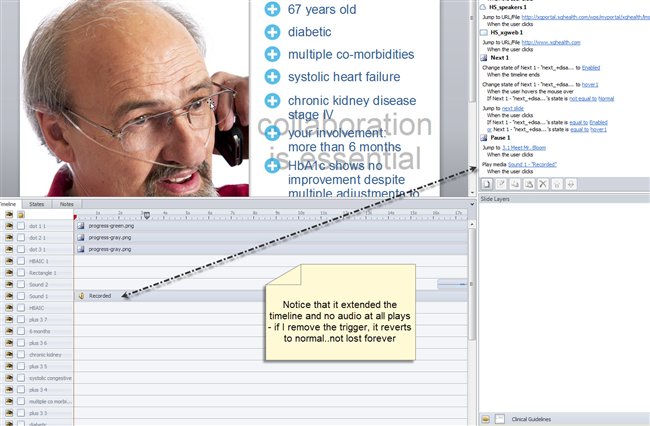 First off, when you add a trigger to the audio - based on a user clicking on something for example, it'll change how that item appears in the timeline as it has now become available for the entire slide's duration - when the user takes an action, instead of showing it just for the time it would play. In regards to why it's not playing - it looks like you have another trigger associated with that click - to take a user to another slide, and based on the order if your trigger panel that trigger is executing first - therefore the play media trigger never has a chance to execute.

As far as the replay button, here is how the Rewind/replay button in Storyline will work.

OK, thanks, Ashley, for the explanation - I get why it turned it into a recorded layer now.  So let me go back to the original issue:

I am not displaying the seekbar in my piece, so there is no rewind button.  I have a button (the orange one in the slides above) that I am using like a rewind button and I've attached the Jump To to accomplish rewinding to the beginning of the slide.

When I use Jump to and provide the slide name, why doesn't it start from the beginning?  Often, it starts from the middle / most recent piece of audio or video played. Is there a way to access the jump to function I just haven't figured out?

Thanks for clarifying - I didn't see an orange button in the slides above, but it looks like I'm not seeing the entire slide.

If you're using the "jump to slide" trigger and choosing the slide you're currently on as an option that should work - but it sounds like your slide is picking up "where it left off" and that is likely because of the slide's revisiting properties. You'll want to set it to "reset to initial state" to allow the slide to always start from the beginning when the user revisits it.

You're right, I didn't show the orange button - but I will play with the reset to initiate state option to make sure  that works.  Thank you Ashley.  I will post back and let you know.