I'm trying to get a specific behavior in my storyline (using Storyline 2) course and it's just not working for me.  So I have a video that I want to make sure everyone watches in full before they can move on to the next slide, this is the scenario I created:

Slide 2 - embedded video in to slide.

And these are the two things I've tried:

I'm really hoping someone can offer some guidance because I'd really like to avoid having to use button 1 to change the state of the button 2, because then I can't force anyone to watch the video.

The trick is to launch the lightboxed video via a layer rather than directly by clicking the button. Then add a trigger to the layer's timeline that changes the state of the button when the timeline ends. 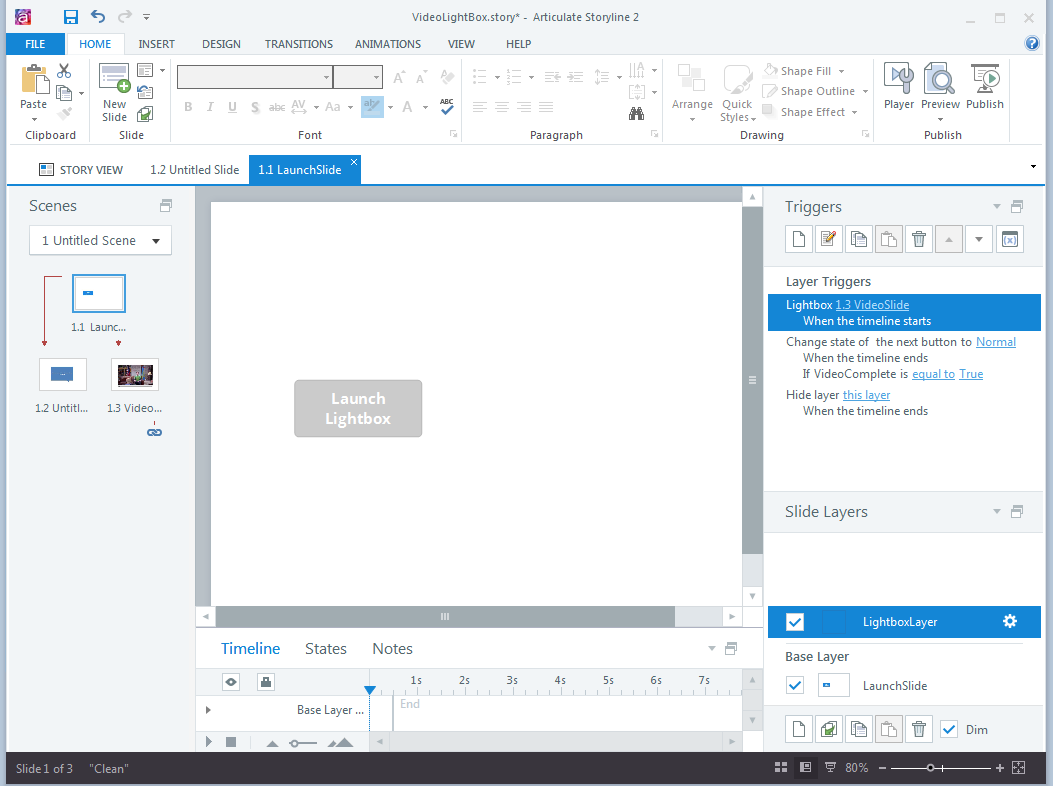 Here is a quick example, where I enable the Next button only when the lightboxed video was viewed completely

Ah I see, so you've built a pseudo light-box by using layers rather than using the default light-box slide option?

Awesome!  I'll give it a shot, in your example though I noticed that there's that grey video seekbar, is that the Storyline seekbar or the 'Show video controls" option for the video.  The reason I ask is because it's a read only seekbar and I can't figure out a way to make that video control seekbar read only.

I didn't create a pseudo lightbox, I simply call the standard lightbox from a layer rather than the baselayer. In my example, I put a transparent shape over the video so that users cannot 'cheat' and use the video's progress bar to fast forward.

I see what you did there now, that's awesome, thanks for sharing that with me.  Really appreciate the different perspective.

Got my course up and running exactly the way I like it, it's perfect!  Thanks again have a great rest of the weekend.

Got luck with your project Alex!

Thanks to you, won't need luck anymore! haha, thanks again for the help, cheers!

Glad that Michael was able to assist you here Alex :)