Make them go away!

Small comic-type scene.  6 draggable choices.  When they are dragged to the feedback panel, they get feedback on that choice.

What I'd *like* to do is allow the user to drag, get feedback on that choice, the dragged button disappears and if they want, drag another button to the feedback box, have THAT button also disappear and get feedback for that button WITHOUT the previously selected button reappearing. 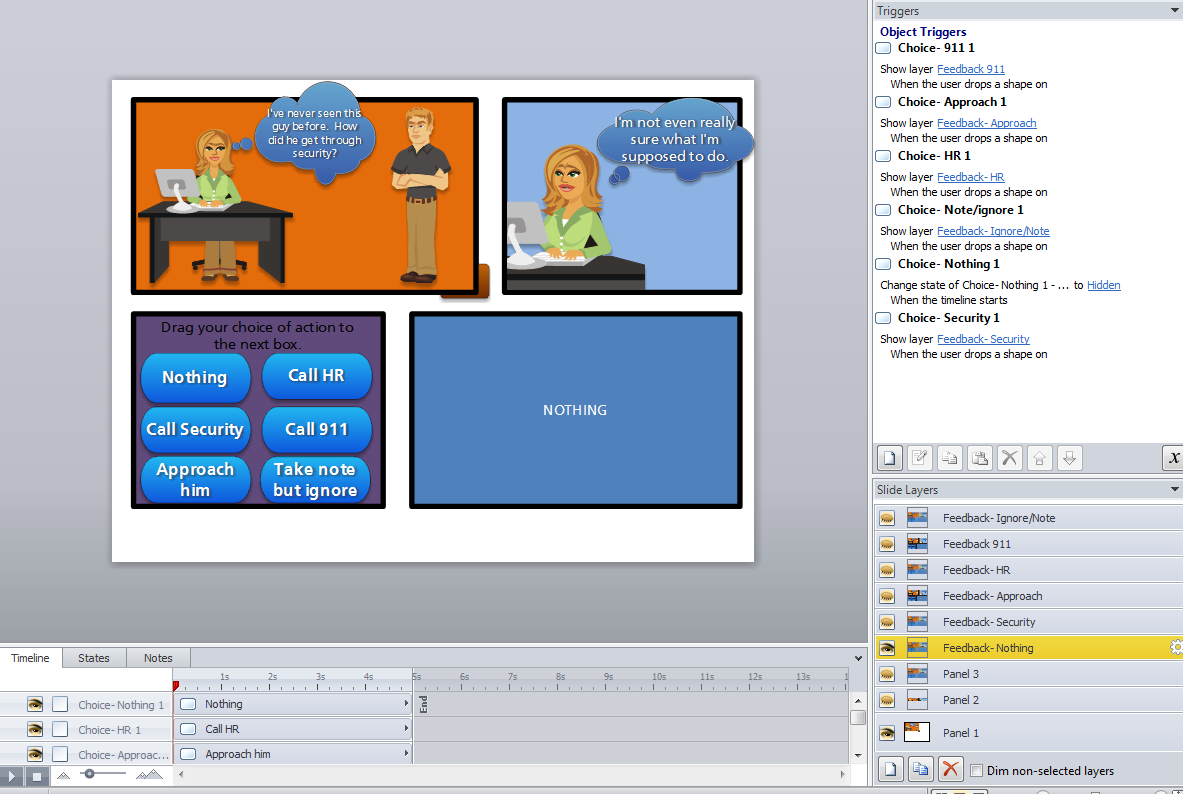 I've tried all sorts of state changes.  I can get it to the point that they can drag as many options as they want but as soon as they drag a new button, the previously selected button reappears.

How do I make them go away for good once they've been dragged??!

Ok you have lost me.    I thought I had an easy answer for this and just spent an hour on it and I am in the same boat as you.

I look forward to others answers.

If you set a trigger to change state of button to hidden when dragged onto, the button will disapear

@ Tom:  Wow.  Thanks for trying.  That was a lot of time.  I've spent too many hours trying to figure it out.  But there's something to be said about, "It's not just me."

@ Phil: All of the buttons have "hidden" triggers when they're dragged to the feedback box.  The trouble I run into is when the next button is dragged, the previously dragged button reappears.

I'm pretty sure it has something to do with the layers.  When a new button is dragged, it triggers "show" a different  feedback layer (a different layer for each button).  But the feedback layers don't know which buttons were previously dragged.  I've tried lots and lots of different conditions.  I either end up with what I have now or ALL the buttons get hidden each time a new layer comes up.

I'm *hoping* there's a way it can be accomplished.  I just might be building it the wrong way.  And, honestly, I'd be fine if an expert said it just can't be done.  At least I'd know.

Read another post and got it sorted out.  You have these same buttons repeated on each layer so you were only changing the state of one of the buttons.

I did some rejigging.  Try this.  It needs some tweaking but does what you want.

So it really was the layer thing.  That was so much simpler.  Holy cow.

p.s.  Sorry for calling you Tom in the last post.

And I got rid of all of the repeat buttons.  That was the biggest issue.  The other way may actually work properly with that fix.

It's interesting that it only seems to work with the drag option and not the drop option.

Tried a different theory that worked for the drop on.  Change the fill of the text box to "No Fill" and you can then drop onto the box below it.  then your original plan can work.

Again, you're spot on.  Worked like a charm.  Many lessons learned today!

In case anyone else would like to use it, here's the cleaned up version.

No problem Kevin.  The gurus on this forum have taught/helped me so much I am glad to help where I can.

Thats brilliant. Thanks for sharing, its a great idea . Stoked that you got it working from a fellow user.