I am evaluating Storyline for possible purchase, and I really like it. I'm having trouble with something that I'm sure will turn out to be very easy. I have an interactive slide with two buttons that work perfectly. The problem is I want the instruction text on the first slide to disappear when the text for the buttons appears. I tried doing an exit animation, which I'm guessing is how it's done, but I can't figure out how to adjust the timeline! Please help . . .

The animation you've included for the text will actually only affect the way the text appears and disappears when the content is finished showing. If you adjust this on the timeline it will disappear, if you have it set to leave at a specific time.

(You may be able to click on the image above to see a larger version.)

If this isn't what you're doing, can you share some more details about how you have the course set up? Alternatively, you're welcome to post your .STORY file here so I (or other community members) can take a look.

Welcome to the Articulate community.

Jeanette Brooks has a great and easy to follow tutorial on how to work with the timeline: http://community.articulate.com/tutorials/products/using-the-timeline.aspx

Hey Deb, welcome to the community!

Here's how to use the timeline in Storyline. And it sounds like there might be a few ways to accomplish what you'd like to do; that's the cool thing about Storyline

Let the community know if you have any other questions or would like some input on new ways to do things.

Thanks, Deb, and welcome again

I have attached the screen I'm referring to . . . 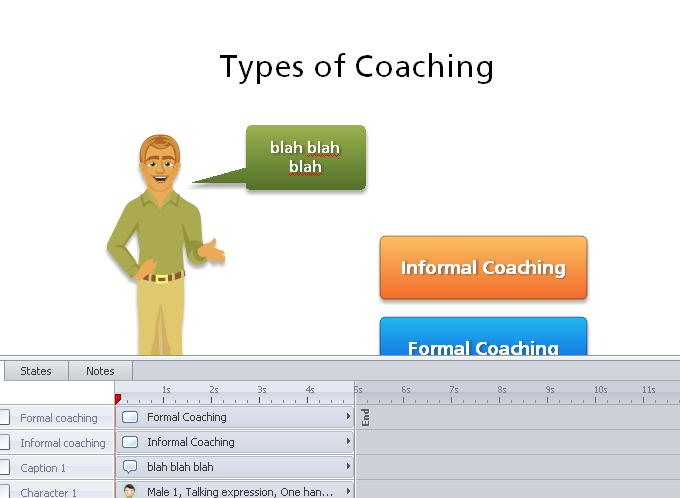 Thanks for the screenshot!  In that case, you'll actually want to use a trigger and not the timeline.

By default, captions won't have a hidden state. But to accomplish what you'd like to do, you'll want to add one. To do this, select your caption and then click on the "States" tab above the timeline. Click on "Edit States", then click on "New State". When the next window opens, enter the name "Hidden" for the state.

Now, once you've created this new state, you'll see a copy of the original caption object on your slide. Be sure you have the new "Hidden" state selected in the "States" pane. Now, click on the caption and either delete the entire caption, or the text (whichever you want to go away when the user clicks on those buttons). Once you're done, click on "Done Editing States".

Now, return to the slide. Select one of the buttons and click on the "Create a new trigger" button in the "Triggers" pane to the right of the slide. In that trigger, you're going to want to set it up so that the state of that caption changes to your newly created "Hidden" state when the user clicks on it.

Here's how you'll set up the trigger: 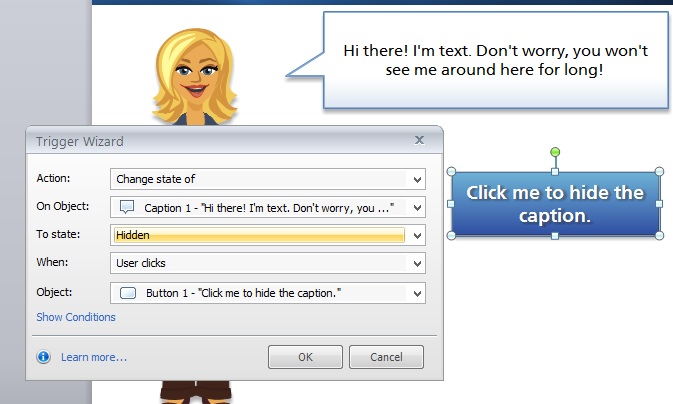 If you want this to happen when either button is clicked, you should be able to use the same trigger set up.

Let me know if you have any questions!