I am new to Articulate.  Just started using it this month.  Is there no Media Library feature in Articulate 3?  I had researched how to create a certain effect for one of my slides and I tried to import a slide I made over in Powerpoint.  I had found in E-Learning Heroes a solution that someone had sent in that fit what I wanted.  I replicated how he had said to do it.  I also had researched where the slide would end up once imported and the article said the content would be in the Media Library.  I don't see that feature anywhere on the Storyline ribbon under any tabs.

Media Library is a Storyline 360 feature only. See here a comparison between SL3 and SL360.

Hi, you should be able to import a PP slide and then use it as a slide or make it a template so that you can apply the style to other slides. Happy to take a look if you can supply a bit more info. I am using SL3 so if I can get it to work then you will be able to as well.

Noel here is the single PP slide I created. Another guy told me that this is how he had to do it to get the same effect. I imported in to Articulate 3 but it does not play the same. All the text appears at the same time when played in Articulate.

Hi Danny, for some reason there is no attachment. If you can try again, I'll take a look.

I don't understand I checked my original in my sent folder and there is an attachment on it.

It looks like you may be replying by email which won't carry any attachments over to eLearning Heroes. Could you click this link and use the Add Attachment button to include the file in your reply?

Looking forward to having a look!

Okay let's try it this way then, LOL.

I'm finding some strange behavior when importing your PowerPoint slide into Storyline 3, and it seems to match what you're describing. The character is missing, and the top bullet is misaligned. 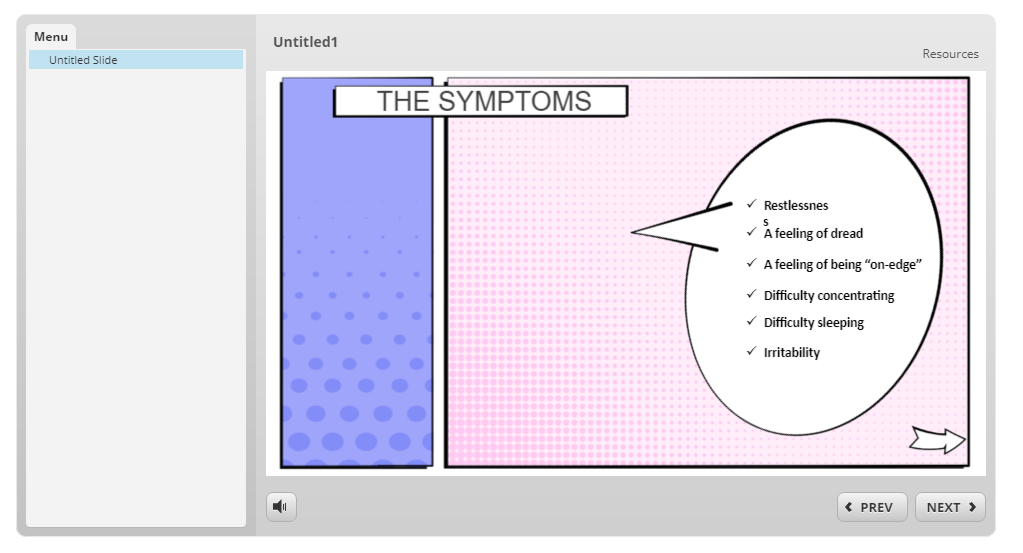 Is that correct? If so, let me get this in front of our team so that we can verify if this is a bug. We'll have a closer look, and I'll circle back to this conversation with any new insight!

Appreciate you bringing this to our attention, and I'm sorry for any headaches!

Yes that is correct. The character is missing, it is a woman in a lab coat with a clipboard in her hand. I got this template off 3-Learning Heroes. Yes the s in restlessness is out of place.

Hi, there was an issue with the image type of the woman. I cut it (ctrl + x) and then used the paste function in PP to paste is as an image and then resized it. I then imported it and it worked fine. I also didn't have a missing 's' - it had dropped to the next line so I resized the text box it was in. I am also using SL3. I've attached my SL3 file so you can see it.

I'm unable to import Content Library 360 assets that are in a Presenter 360 file into Storyline 3 in a new project file and have logged this as a possible bug. So strange! I'm going to share this behavior with our team, and we'll share any new information here as soon as we know more.

Hello, Noel. Your .story looks stellar! Thanks for having a look and for sharing your process with us. I'm going to add your tips into the report so we can dig deeper.

If there's anything else I can help answer, I'll be here!