I’m having trouble with part of an old state showing up in the new state.

In this example, there is a graphic of “Mary”, facing forward & smiling.  Behind that graphic I set up a blue box.

TRIGGER 1: I set up a trigger, so that  if the mouse hovers over the picture ,  the state changes to  a talking character with the caption, “Hi my name is Mary …” .

TRIGGER 2:If the learner clicks on “Mary”, there is a trigger to change the state of Mary to an angry expression with a caption, “Hey … “.

TRIGGER 3: I’ve set up a 3rd trigger to set the state of Mary back to normal(forward, smiling, no caption).  When the mouse hovers over the blue box surrounding Mary, Mary’s state changes back to normal.

This works fine a good portion of the time.  However, if  after going through 1 set of all those triggers, I try to again have the mouse hover over Mary – I DO get the state change (to talking Mary w/ caption “hi….), but, at times, I will see part of the caption from Trigger 2 underneath the “hi” caption.  Sometimes that Trigger 2 caption is there, sometimes it is not.  Any thoughts as to why the state change isn’t behaving as it should?

storyline slide is attached.  Screen shot is below: 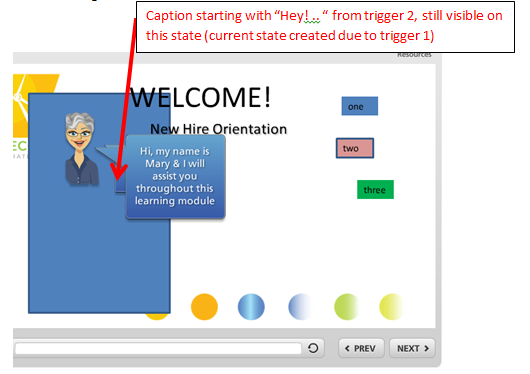 I think the problem is because your triggers were on two separate objects and the is the opportunity for overlap... For example, you could click on one object and be hovered over another object.

Hi Carol! Looks like Blake was able to assist you here. Thanks for the update