I recently created a Articulate Storyline project using 900X540 "widescreen" format.  It looks great when I preview and look at the published version in HTML.  The issue I'm having is that when I launch from our LMS (a company called Interactyx, LMS called Topyx) the window that appears to display the project cuts off the sides of the project, creating the need to scroll horizontally.  YUCK!

Our LMS tech support has adjusted the the player window of the LMS to a width of 2200px, but this project still gets cut!  She thinks it's something to do with the Articulate Storyline project itself.  Any ideas?

I've attached a screenshot.  There is plenty of screen real estate on both sides, but we can't figure out why the Articulate project is not playing nice with the LMS player.

Figured it out!  Had to do with Player Properties.  Check out the screen shot if you ever run into this issue. 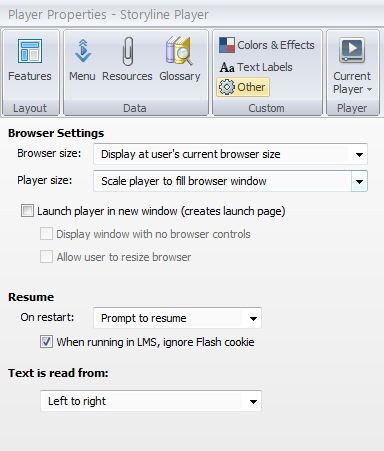 Hi Ian! Thanks for sharing with the community!