Hi all, I'm looking for some guidance about how best to approach this project. We need to incorporate a series of animated PowerPoint slides with a presenter video (embedded player with video streamed from a separate hosting service), followed by a set of questions about the material just discussed. I don't have a lot of requirements around how the video is presented within the player, but I believe the client's idea is to have the presenter appear in the upper left, with the option of going full player as necessary (unsure at this point whether that would be sequenced or on-demand).

The only way I can think to approach this would be to dump everything (video, multiple PPT slides) on one SL slide as objects and use the slide's timeline to sequence the transitions in the content. I'd then modify the player to remove the sidebar, and possibly replicate my own "menu" as clickable hotspots within the slide itself. Something like this... 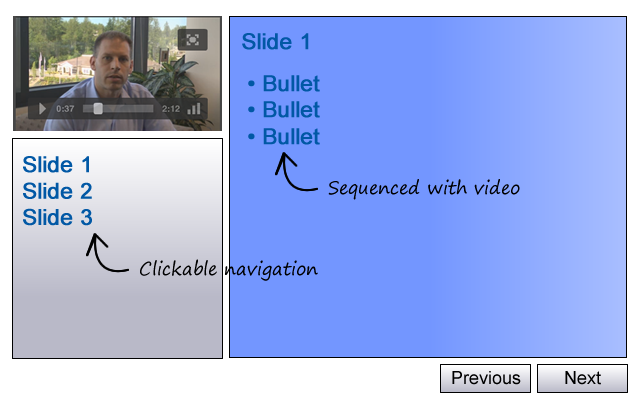 I have no idea how to pull multiple PowerPoint slides, which are usually imported as groups of objects with animations, into one SL slide without making a giant mess of the timeline, but maybe one of you has some ideas to share.

I just want to throw this scenario out the group to make sure I'm not missing a really obvious (and much simpler) solution. Thanks!

PS: Does Storyline provide a means to allow the user to click on content (e.g., video, slide) and have it maximize (or just resize) within the player? I'm thinking of an on-demand zoom feature.

It seems you guys are taking the Mr. Myagi approach to teaching Daniel-san the crane kick...your silence forcing me to figure it out for myself. So here's what I came up with. I combined the presenter video and PowerPoint slides into a single using Camtasia, which I then published to our video hosting service, Vzaar. I then used an embed code to pull the video back into a Storyline slide, after which a series of additional slides provide the quiz questions. The video player's controls let users seek within the video. Not ideal, but I think it'll get the job done. Wax-on, wax-off.

Still, if anyone has a better solution. I'm all ears (no, that's not a dig at Ralph Macchio).

Here's a follow-up question/concern. I also want to include some resources in the course, but the embedded video player on the main slide seems to lay over the resources pull-down. Seems like Articulate Presenter used to do this same thing with web objects on my slides, too. Other than the obvious "don't put the video player there" solution, any fix or work-around for this bug?

The Myagi approach has paid off - you've got some great ideas

Wanted to throw another one at you, from Master Bruce.