Problem with Notes and Resources not appearing - then reappearing

Hello.  I have a Storyline file that has a problem upon publication.  The Notes and Resources options appear in Preview mode, but upon publication to do appear -- right away.  In other words, they are not visible on the first two slides, but upon selecting the third slide, they appear.  Once they are visible the do not remain so when re-selecting the first and second slides a second time.

When I originally noticed this difficulty I had an Engage interaction imported into the Storyline file.  I read in the forum that this could be causing the problem - so, I created a completely new file and reworked the interaction into a series of separate slides.  I did this to avoid any "ghost contamination" that might linger if my approach had been to make the edits in the original file.

So, the good news is that I can see the Notes and Resources after slide three - but what in the world is going on in the beginning?  Any ideas?  Thanks.

Hi Karen! If you could share your .story file either here in the forums or here privately, that may help.

Have you checked that slides 1 and 2 don't have Custom Player properties set up to disable the Notes and Resources? 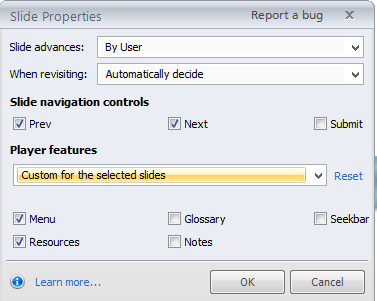 That's a good suggestion - actually, it's too late to look because this morning I decided to replace those slides with fresh ones and re-insert the content.  It seems to be working now - so that might have been the issue.  Thank you for getting back to me.

Well glad to hear that you got it working Karen. Thanks for the update.

Happy to help, and happier to hear you've got everything working!