Question about Layers and Timeline

I'm working on a course where the user clicks on a characters to open the next layers with more content/character conversation. We've set up conversation bubbles and instructions to appear at what we basically think are good times for most users. What we're finding in testing is that some users catch on quicker - which is great. But when the click on a character too fast and jump to the next layer, the instructions on the previous layer pop up too as does the conversation bubble which creates a jumbled mess.

I have disabled (on each layer) the ability for users to touch the base layer and hidden other layers, but it didn't fix the problem. I guess could lock down the characters not to trigger until the timeline ends, but I'm trying not to lock down the course too much. I'm thinking there's probably a really easy fix, like the length of the timeline on the layers or something, that I'm missing Any assistance would be greatly appreciated.

It would probably be easier to troubleshoot if we could see the .story file and see the odd behaviour. Could you upload the course or problem slide for us to have a look at ?

Sure. It's attached. Best way to make the issue happen is to:

2) Go to first slide in his story (no issue)

3) Second slide in his story "Manuel Seeks Advice," click madly on Dave (foreman in the white hat) - eventually all the thought bubbles and the instructions from the previous layer will "jumble" with the instructions on this layer.

Seems that it can happen on any of the ones we have layers on. We included Dave too.

I took a look at your file, and if you add a trigger to the Dave image to hide the thought bubbles on the first layer when he is clicked, those will go away when the user clicks, and the new ones will appear.

This i son Slide 1.4 in the attached file.

Hopefully some others in the community can give other ideas as well!

Hi Emily! Thanks for taking a look at this. I really appreciate it. Sorry I wasn't so clear in my original post. Our problem isn't that the thought bubbles don't go away. They do if a user waits for the instructions to appear before clicking on any of our characters or if they click once. Unfortunately, if you click wildly on one of them, Dave in this example, it allows ALL the thought bubbles as well as the instructions from the layer below. Now, I realize that isn't "normal" functionality but I have had test users do this so I need to figure out a fix before we take it live.

I did look at your update. Unfortunately, it still behaved this way. See picture.

Thanks again for looking! 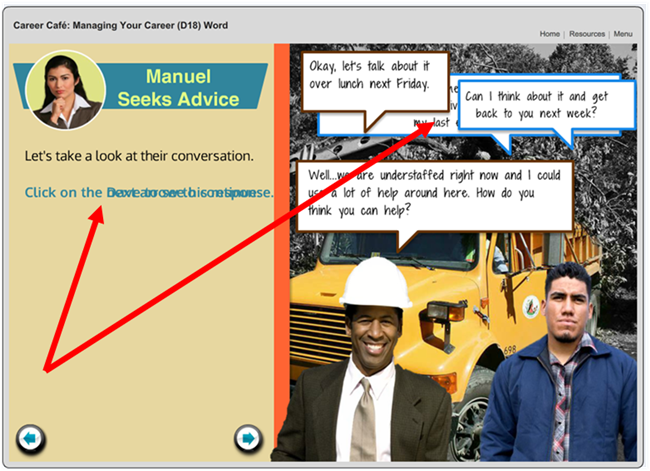 Yes this will happen if the user clicks the image before the second bubble thought bubble appears on the first layer.  If they wait for the instruction, the trigger will hide the two bubbles and let the next appear.

You could make the second thought bubble appear a few seconds sooner, maybe before the instructions to click Dave?

I've had a bit of a click around at it seems that the issue may be being caused by the timeline of the base layer. If you go into your layer properties and select 'pause timeline of base layer' this should fix it. You'll just need to be aware that the base layer will try to resume when the layer is closed again (I don't know how relevant that is for your course).

Thanks Harri! I'll give it a try. I suspected the timeline was involved somehow but couldn't figure out the fix.

Thanks all for looking at this. Checking that on all of them worked. Users can still move fast if they want to but won't get the jumble. Win-win!

Thanks for the update Kim, glad Harri's suggestions worked!