Hello...first time poster here. I didn't see this particular situation addressed before so here goes. Using Storyline 360, which is up to date.

I have a drag-and-drop interaction set up, and the user has 2 tries to get it right. This serves as a kind of pre-test to get them into the content; it's not an actual graded quiz.

Regardless of the outcome (right/wrong), they will go onto the immediately following content slides.

At the end of that content (several slides), the drag-and-drop reappears for them to retry. I want the retry (and the results slide that appears if they get it wrong) to ONLY appear if they did not get the interaction correct on the first try, several slides before. No need to re-do if they already did it right!

On the "pre-test" slide, I have set up a variable on the "you're correct" layer that changes the value to "true" if the learner clicks the "continue" button on that layer, which only appears if they are right. 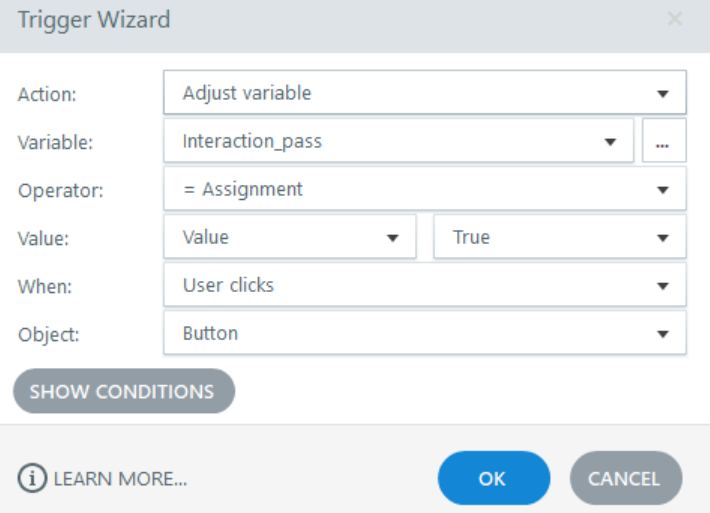 There's also a variable on the "sorry" layer that displays if they are wrong for the second time that changes to "false" when the learner clicks "continue" on *that* layer. 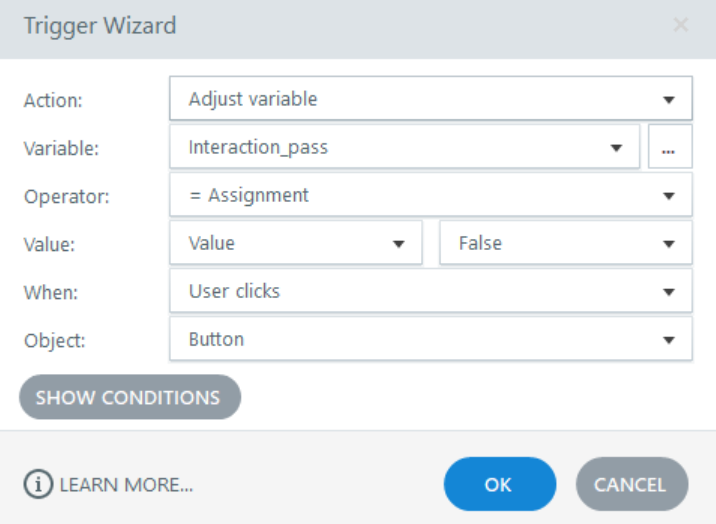 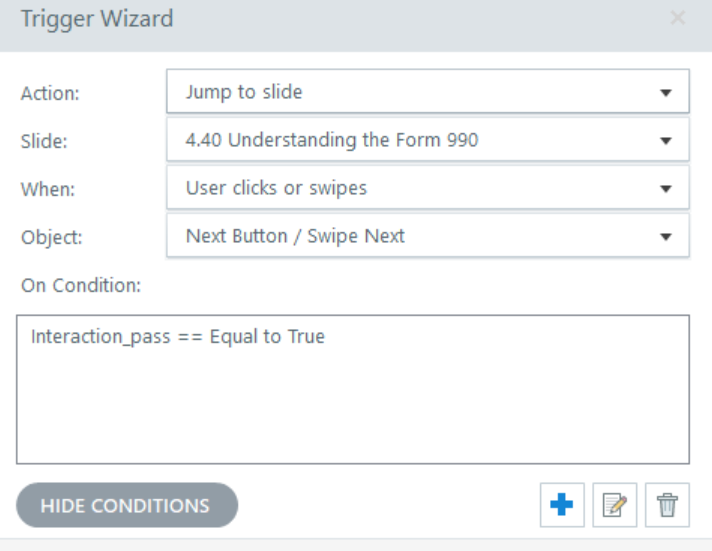 There's also a trigger on that slide that says go to the retry slide when "next" is clicked if the variable is set to "false"--they were wrong. 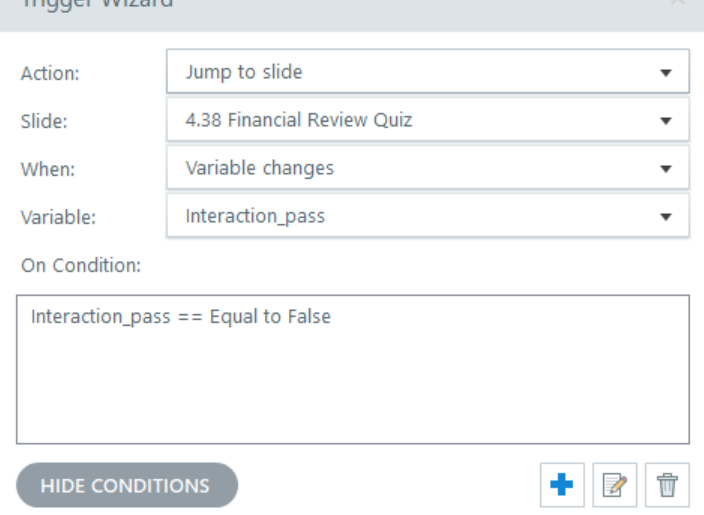 But--it's not skipping the retry slide if they got the interaction correct the first time.

Perhaps my variables are set incorrectly, or the triggers. Missing conditions? Maybe it's not possible to create a variable on a layer that affects navigation later in the scene?

Any pointers/solutions would be appreciated!

Your trigger to go to 4.38 is incorrect. It's not about the variable changing. You basically need 2 triggers like the one above it (that you have created re 4.40)...

1) That jumps to 4.40 when they click next if the variable is true

2) one that jumps to 4,38 when they click next if the variable is false

This trigger is the problem: 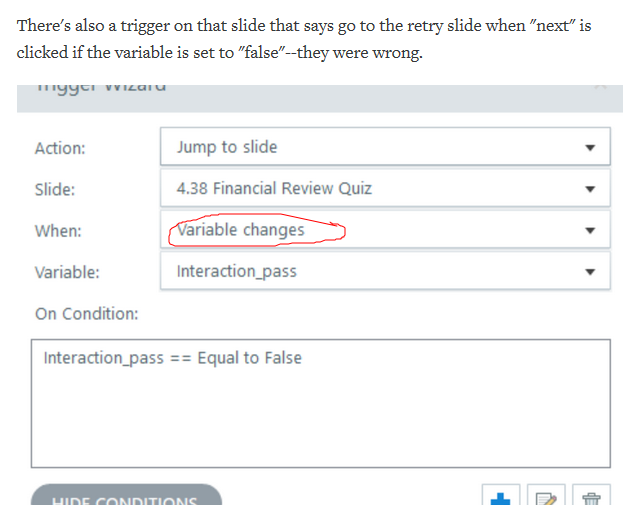 It needs to be set to When "Next" is clicked.  FYI Triggers can only read "When variable changes" on the slide that changes it.

Thanks to you both. I'll take a look and see if I can make it work based on your instructions.

I made the change you both suggested (thank you! makes sense). But I'm still not able to skip the re-test slide if the value is true.

Seems like it's not reading the "true" or "false" based on the learner's actions. It seems to be looking at the default value.

Is it an issue that the variables are set on feedback layers on the pre-test slide?

Any other ideas? TIA!

It's hard to picture what you have done without seeing the project. Are you able to attach a version here?

If the pre-test is passed on the first or second try, then the learner should skip 4.39 and 4.40 (results).

That was a huge file! You say that you have made the changes we suggest, but in fact 4.48 doesn't have any coding other than move to the next slide. You appear to have deleted the triggers that needed correcting.

In plain English (rather than coding)...

* Jump to slide X on condition that Interaction_pass = true

* Jump to slide X on condition that Interaction_pass = false

Sorry, that file is far too big to upload corrected. It took 30 minutes to download at work!

Yeah, so sorry for the size. I converted a full-day workshop into this survey course (eliminated A LOT).

The triggers actually reside on 4.37 as 4.38 is an optional slide (pop-up resource linked from 4.37) that may be skipped. So I put the triggers on the slide I knew they'd be on. 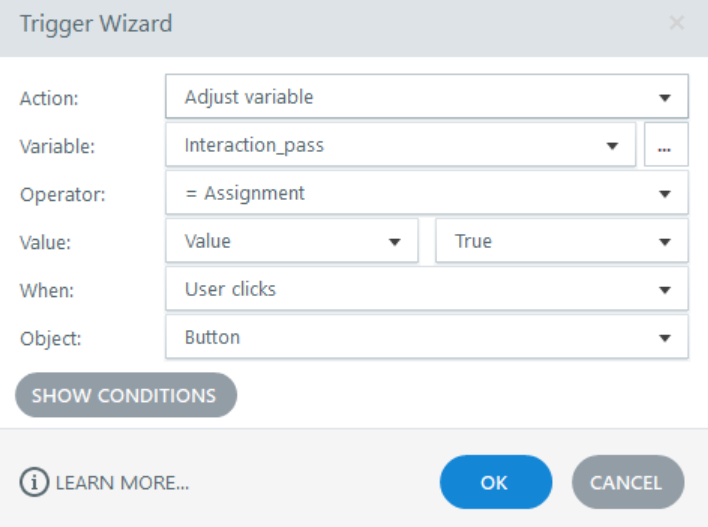 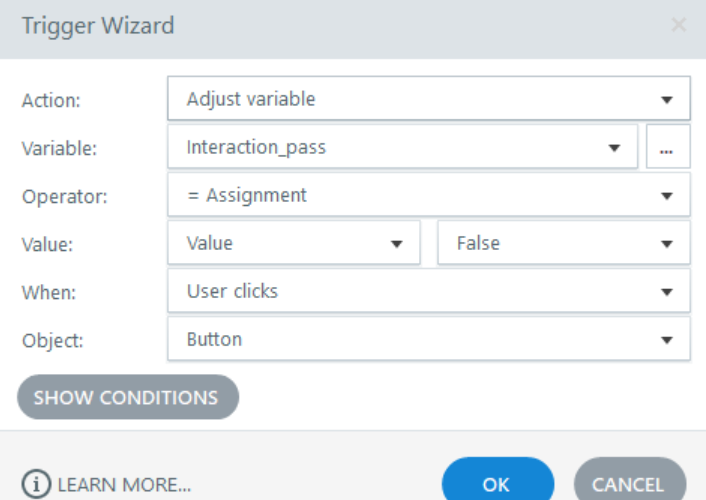 And as I mentioned above, I played with the default value and got different outcomes.

Sorry, I'm not going to be able to help more than the following as I have a tight deadline this week, and it's Friday morning here :-)

Can I suggest, on 4.37, that you place a temporary text field on that slide and insert the variable Interaction_pass to display in that box. I tend to highlight in yellow to help me indicate its for testing. Then work through the module and see, when you get to 4.37, that the value of that variable is what you expect. If it is and the slide doesn't work, then the slide is the issue. If the value is unexpected when you get to that slide, then the issue lies somewhere else.

If you are still stuck next week, I'll try to come back to this.

Carolyn, it's trigger ordering on the buttons on slide 4.25 (I hate computers sometimes for being so fussy!)

You had it set to firstly jump to the next slide and then secondly, adjust the variable. It won't do the second, because it has already left the slide.

Just change the order as per attached image...do this to both layer buttons on 4.25. Basically it was never changing the variable.

Philip, YOU ARE AWESOME.

I will never forget this lesson: trigger order matters.

Glad I could help.