In developing my quiz I wanted the learner to have a 2nd attempt at passing, if they failed the first time. But I only want a total of 2 attempts. To get this to work I have created 3 layers on my results slide - Success, Failure and Failure 2nd attempt. What I am trying to do is to is get the 2nd layer to display only after the user has attempted the quiz a 2nd time. Because the quiz resets after the users clicks retry quiz, I cannot get it to hide the failure layer (2nd time around) and display the failure 2nd attempt layer.

I hope that someone has an idea or two!

huge file...I am not uploading it so here is what I did - hope this helps

2. On the result slide, set 2 triggers - see images below. 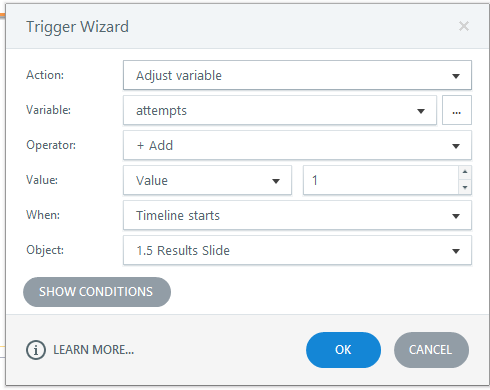 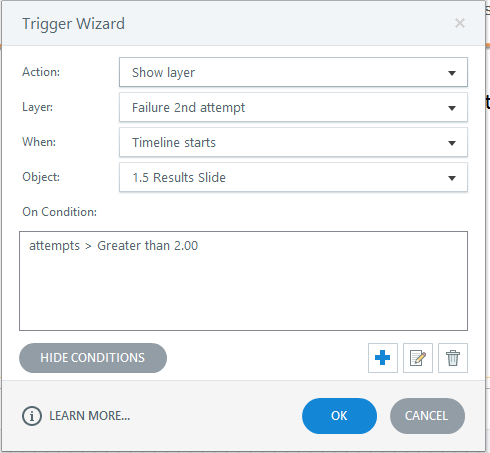 Hi Wendy, thanks I will give that a shot! Apologies for the huge file, not sure what happened there!

Hi Wendy, thanks it worked a treat!

Glad that Wendy was able to assist you here Maree, thanks for the update :)

I am enquiring about the same issue. Would like to give the learners a 2nd attempt only. After the 2nd attempt, if they still fail, it will just record that result and no more attempts.

Not sure what I'm doing wrong, because it keeps taking me back to the Failure Layer with the retry button. 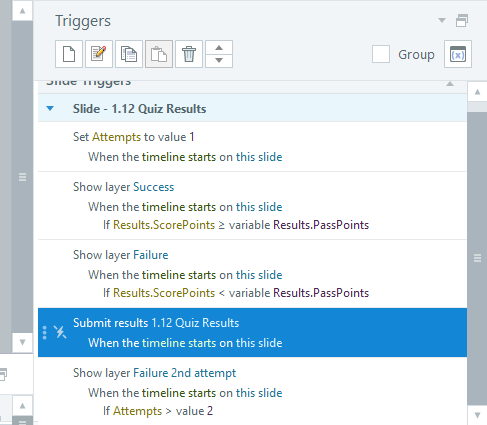 Are you using a built-in quiz ? They are set up to show the Correct layer if answered correctly, the Try Again layer if answered incorrectly with more attempts remaining, and Incorrect layer if the last attempt is incorrect. No need for any triggers. They do have to have those names, but if you enter the appropriate messages at the bottom of the Form View, they are created automatically. Then you can customize the appearance and triggers of those layers.

Hi Walt, thanks for sharing.

The client would like us to give the learners a 2nd try after one full attempt at all the questions.

When the result slide comes up showing they failed, I've included the retry button so they can re-do all the questions. However, if the result slide shows they failed the test a 2nd time, I don't want them to have another attempt.  I'm thinking to use the triggers for this. Could you assist?

My initial thought is that the trigger "Set Attempts to value 1 when the timeline starts on this slide" is causing the issue you described. Every time the learner reaches the Results slide, the variable receives the value of 1, so Attempts will never be higher than 2.

Instead, try changing that trigger to "Add value 1 to Attempts when the timeline starts on this slide".

Thank you Maria, this worked!

I changed the trigger "Add value 1 to Attempts when the timeline starts on this slide" as you see below and it worked!

Thank you so much 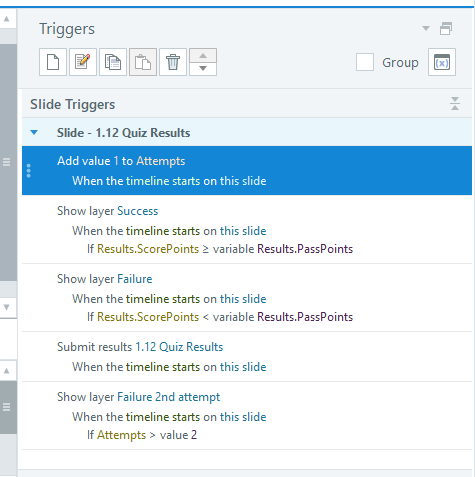 Thank you for taking the time to update the discussion and letting us know the suggestion helped. I'm happy to hear it!