Hi. I have a master slide that has a character on it with various states. I want the state of the character to change depending on current score in the quiz. Here's what I tried:

1) I setup a trigger on the master that changes the state when the user clicks the submit button. That works. If I add a condition so that only happens if results.scorepeercent = 25 then it doesn't work despite the fact that I can see on the slide (where I've placed a variable reference) that the current value after clicking submit is 25.

2) I also tried this another way so that when the timeline begins on the master, it evaluates the score and changes the state. This doesn't work either.

3) If I do it yet another way on the master so that it changes states when the variable changes, it doesn't list any availalbe variables even though results.scorepercent is valid and active in the project. And this doesn't work either.

If I move this character to a normal slide outside of the master, it works when I use option 1 or 2 above yet the same method won't work in the master. Why is that? Bringing the obejct into the slide itself defeats the purpose of having a master. It means I have to repeat the character multiple times plus I have to repeat the triggers that control multiple states, multiple times too because they don't come along with the character (they are either slide or player controls).

Does anyone have any ideas?

Where is the character appearing? On every slide? Apologies that I'm missing it.

I've had success with the character changing expressions on the results slide.

I need to sign off (I am SO addicted to SL), but I figured I'd at least upload what I've done. It's really barebones, which is probably why it's working. But I figured it's worth a shot.

So, I'm probably not totally getting it, but now I've added a character to the Title and Content layout in the Master. I've only done 3 states: feet (the very partial part of the character), half (feet to tummy sort of) and normal (entire character)

Added 2 triggers to change the character when the timeline starts (on the title and content) when user clicks submit if etc. etc. You'll see it in the master on that layout

I've also left my other character and triggers on the Blank layout in the slide master as I described them above.

Really curious to know what the differences are...and I really like your idea! Tx for sharing it. Would love to know more about it - at least what you can reveal without breaching a contract.

Oh, and I think when I was first playing around with this that maybe it didn't work when I tried it on the "master master" slide. Didn't have time to test that out though.

Thanks Rebecca. You've gone out of your way to help me and I really appreciate that! It turns out through a painful process of elimination (since logic wasn't working too well) that the cause of problem was the states for the character. Instead of creating a state with a single object in it that changed expression, I had created states with two objects; a darken outline of the character and the character with expression change on top. Turns out when placed on the master slide, SL uses the image behind the character which was why I wasn't seeing any expression changes. When you put the same logic and character on a slide, SL knows to keep the two objects intact as they appear in the states panel. I burned through a few hours on this one. Too bad its a bug or limitation in SL but good that it wasn't a limitation of my brain. : ) 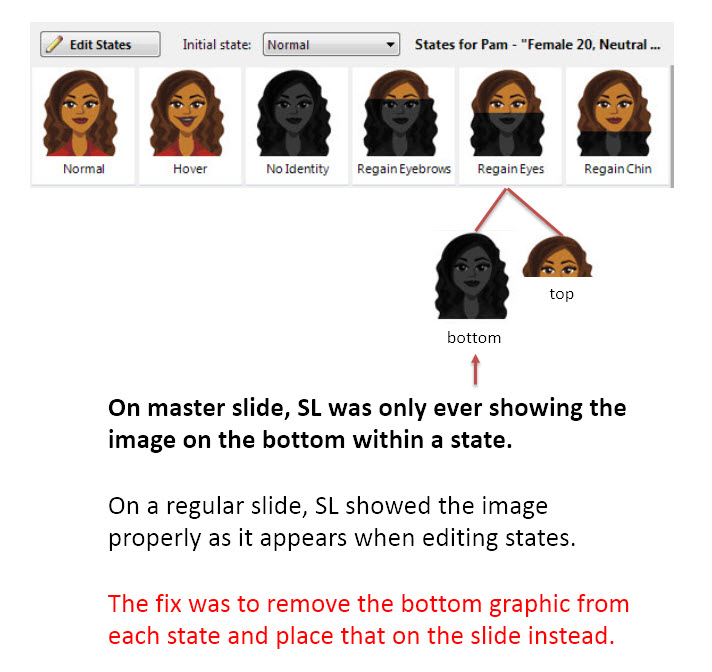 Fun trying to tease it out with you. I know what you mean by clocking that kind of time, which at least for me would be unbillable. That is, I wouldn't charge a client while I tried to figure the whole thing out. And I often stay up into the wee hours cuz I can't let go and wouldn't be able to sleep anyway!

Glad you discovered the issue.

The time trying to discover a cause isn't billable. Sometimes that's a lot of hours but I don't have the ability to let it go either. I need to understand why and take note of limitations and workarounds. Luckily, I don't run into too many tricky situations with SL particularly good given how hard I push the product.

Thanks again for working with me on this!